Today’s Card of the Day features Adam Comorosky on a 1931-32 Exhibits Four-On-One card. He was born on this date in 1904 and he played for the 1926-33 Pittsburgh Pirates. He’s the owner of one of my favorite baseball stats ever, mostly because it somehow slipped under the radar for so long, and when I noticed it about 8-10 years ago, I couldn’t find any other references to it. This card doesn’t just feature Comorosky though, it also has Hall of Famer Pie Traynor, as well as Pirates infielders Gus Suhr and Tommy Thevenow. Comorosky has a popular card from his Pirates days in the 1933 Goudey set, but I’ve already featured that here. After that card, there isn’t much else from his time with the Pirates. In fact, this was the only scan I could find of another card, though another option exists. This is a great set though, small in size, but packed with great players, so let’s get our first look at the 1931-32 Exhibits set.

Here’s the front of this card: 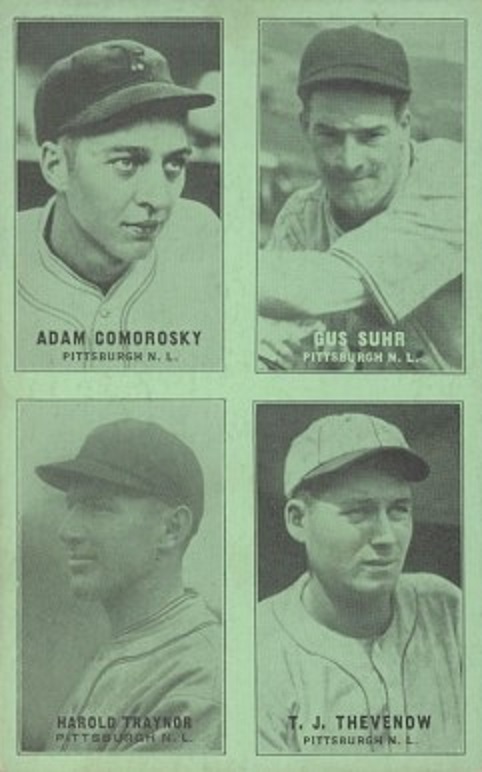 You didn’t think I wasn’t going to tell you the Comorosky fun fact, did you? In 1930, he hit 47 doubles, 23 triples and 12 homers. No other player in big league history has reached/surpassed all three of those stats in the same season. The triples make it nearly impossible to accomplish now because the stadiums/fields aren’t as big now. A batter hitting 23+ triples in a season has only happened 32 times in baseball history. If somebody does reach that number, what are the chances that they will hit 47 doubles that same year? The MLB leader(s) in doubles in 2021 hit 42. Even just reaching the minimum of 82 extra-base hits isn’t happening every single year, yet just reaching that number you would still need the perfect three-way split to equal his mark. I’m definitely not saying it won’t ever be equaled, but the fact that we just completed year 151 of Major League baseball and he’s the only player to reach those numbers in the same season is impressive.

There are 32 cards in this set and they measure 3-3/8” by 5-3/8” in size. Traynor was the big draw at the time, finishing in the top 13 in MVP voting every season except one from 1925 through 1933, and the year he missed (1930), he set a career high in OPS. The only reason he missed a run of nine straight seasons is that they did not have MVP voting that season. Comorosky was coming off of his big season in 1930, but he quickly dropped off and never recovered. He played until 1935 and combined for -0.1 WAR during his final five seasons. Suhr drove in 107 runs as a rookie in 1930, but an early season injury limited him to 87 games in 1931 and a .211 average. What was unknown at that time was that he had started a streak of consecutive games at the end of 1931 that would set a National League record of 822 at the time. That streak is the tenth longest in baseball history. Thevenow was a light-hitting shortstop, who was there for his glove. His 2.3 WAR on defense in 1931 ranks as one of the best seasons in franchise history (tied for 29th best), but he was a career -4.9 WAR in 15 seasons due to no power/walks and a low average. 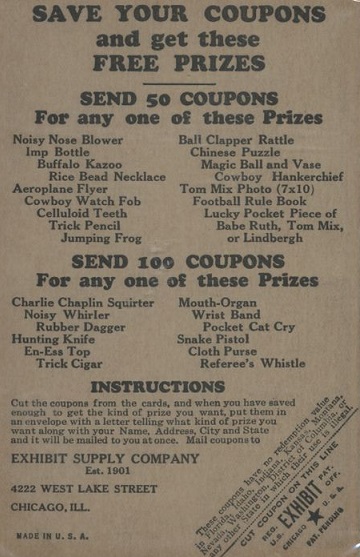 The backs of these cards had almost nothing baseball related, except a prize that involved Babe Ruth. Some of those prizes are crazy, because you assume kids were ordering them. Right next to each other, the options include a rubber dagger and a hunting knife? A snake pistol? I have no idea what a Charlie Chaplin Squirter is and I don’t think I want to know either. A pocket cat cry? I will not be sending 100 coupons for any of those “prizes”. Good day, sir.

I don’t have a specific price for this card, but I can tell you what similar cards are being listed for on Ebay. Amazingly, there isn’t a sale from this set in the last three months unless it was listed wrong, because my search came up with nothing. I guess a comparable card would be a PSA 2 of players from the St Louis Browns, with Hall of Famer Rick Ferrell. It’s comparable in the sense that Ferrell and Traynor are both in the Hall, along with three non-HOF players. Neither is a top tier among prices for Hall of Famers, though I believe that Traynor is a little pricier overall, but this card works here. The seller is asking $190 for that card, which is in line with the other listings from this set. Some nicer ones are around $250-$300, and there’s a Luke Appling rookie card, which someone is asking $950 in an SGC 40. They are asking that much, but from the little I could find, that seems high. Basically, if you want to get this card, it will be hard to find and pricey.