In yesterday’s Card of the Day article, I used a 1966 Topps card of Don Cardwell. It was the first time that he has been featured here, so I had all of his Pittsburgh Pirates cards to choose from for the article subject. In that article, I mentioned that his 1963 Topps card used the old Topps trick of picturing players with new teams by using older pictures of them without hats, then cropping the photo so you can’t see the name/logo of their old team on the jersey. It was a genius plan that helped them feature players in sets without doing the awful airbrushing jobs that they started doing in later years.

I tell you all of that to lead into today’s Card of the Day, which features Pirates catcher Jim Pagliaroni on his 1963 Topps card. He was born on this date in 1937. This is the first time here for Pagliaroni and I basically had the same choices as Cardwell as far as years/sets. As I scrolled through Ebay, I noticed the 1963 Topps card of Pagliaroni shows him in a closeup photo without a cap. That’s because the Pirates traded for him in November of 1962 and these cards came out before the 1963 season, just months later. So what you see here is what I purposely avoided yesterday with Don Cardwell. Here’s card #159 in the 1963 Topps set, picturing Jim Pagliaroni. 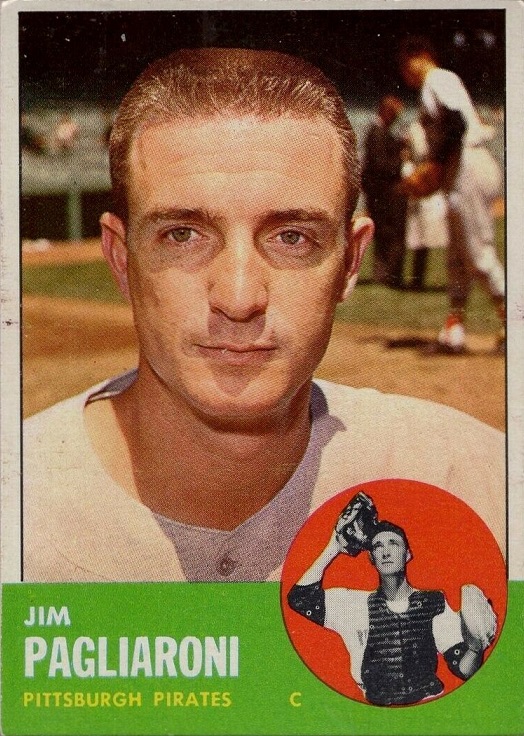 While I’m not a huge fan of the 1963 Topps design, I do like the usage of a second photo on the front and that they used a black and white photo for that spot to change things up. In this particular case, the smaller photo is much better. I know with some older cards, the portrait variations are the most popular. A great example is looking at the prices of T206 Ty Cobb cards, with the two portraits going for much more than the two batting poses, which I like better. So of course with this card I’m going to prefer the catcher pose in full gear. They’re baseball players, you should know that right away when you look at the photo. In this instance, the background is what gives it away, but without that you couldn’t say for certain that was a baseball player. He may be a cool guidance counselor or a milkman, but not a catcher who should have received at least one All-Star nod during his career.

Other than the pictures, the 1963 Topps set had all of the design features at the bottom and they went with bright color combos. Not all of the Pirates had the traffic light combo of green, red and yellow (team name). The Roberto Clemente card had a blue box, red background for the second photo, and black writing for the team name. Bob Friend had a yellow box, blue circle, and his name was written in red. Vern Law had the same combo as Pagliaroni. 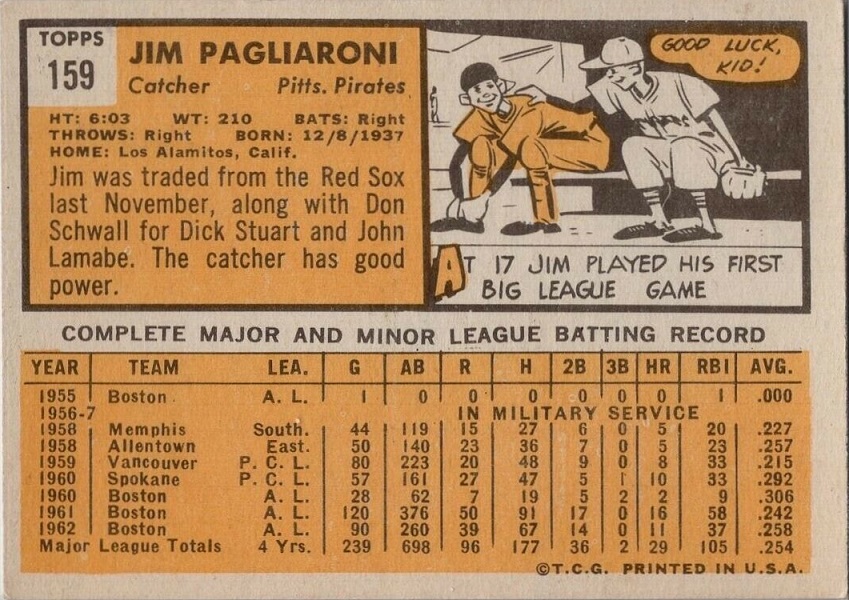 The cartoon on the back features generic gray Topps man as a younger player, apparently talking to himself, though he aged well I guess, because he looks like twins, but he’s calling his younger self “kid”. Pagliaroni had an interesting start to his career, getting a shot in the majors three years before his first minor league game. He hit a sacrifice fly in his only plate appearance.

Back during this time period, there was a Bonus Baby rule to keep the best teams from signing the best prospects. If the bonus of a player exceeded a certain amount, the player had to spend a year on the big league roster right away. The rule changed slightly a few times, and for part of its existence, the player had to spend two full years on the roster (as in if they signed on June 17, 1951, then would have had to stay until June 17, 1953). The rule allowed the Pirates to stockpile young players, though a majority of them didn’t work out. Turns out that sitting in the majors for two years with zero minor league experience wasn’t always a good idea. One of the tricks of the rule was letting the player serve out his time in military service, which wasn’t a requirement back then, but it was something that most people expected to happen with two recent wars and a draft in place.

If you’re interested in the card despite the Topps photo trickery (perhaps it’s because of the trickery, who am I to judge?), you’ll be happy to know that you can grab a mid-grade common for about $2 delivered, maybe a few bucks more if you want a nicer one. There are a few auctions of note. Two people have PSA 8 copies available and they’re both around $40 each. Go down to PSA 7 and you can get it for $30, though it has a best offer option. There are actually a few others cheaper in the same grade, so I wouldn’t recommend the higher priced one unless they come down on the price. Go down just a little more in price and you can get a signed/authenticated copy. Go a little lower and you can get a signed copy that isn’t authenticated by a grading copy. They go as low as $9, though they aren’t the best quality autographs. You have plenty of condition options here, as cards from the 1960s are very popular now, so Ebay is full of them.