Pittsburgh Pirates pitcher Don Cardwell was born on this date in 1935. He came to the Pirates from the St Louis Cardinals as part of the four-player deal that involved Dick Groat. Cardwell never actually played for the Cardinals. He was acquired by them from the Chicago Cubs one month before the Pirates trade. The trade basically turned into Groat for Cardwell was the two other players in the deal provided their new teams with almost no time or value. Cardwell did a good job of holding up his end of the deal when he was healthy, but he was also limited to four starts during the 1964 season, which was right in the middle of two seasons in which he threw a total of 454 innings.

Cardwell hasn’t been featured here yet, so I had my pick of his cards showing him with the Pirates. It’s not a large selection, just four Topps cards and a few other choices, including one produced in 1978 by TCMA. I let my past article choices decide today’s card for me. I haven’t featured the 1966 Topps set here often, and it’s been five months since the last time we included the set. So here’s a look at card #235 from the 1966 Topps set featuring Don Cardwell. 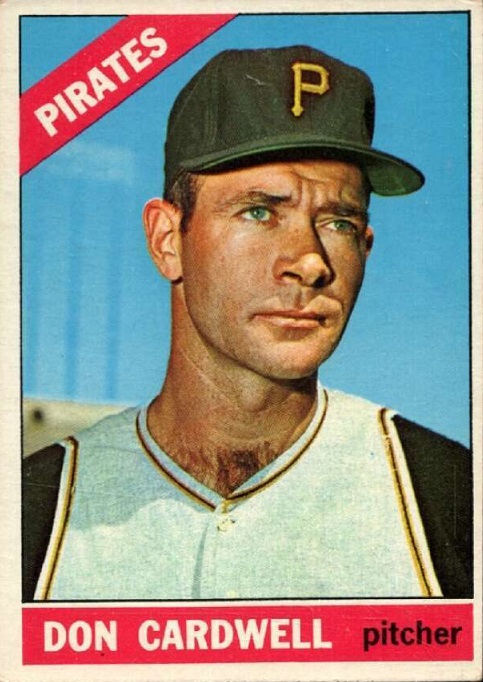 The 1966 Topps design is a rather simple one, and for some reason it was the second year in a row that they used a pink color for the Pirates. I think I like this set a little better than the 1965 set just because the amount of pink is smaller, giving you slightly more photo for each player. They changed the colors for each team, with some overlaps, but they didn’t always match them up to team colors. In particular, I like the Cleveland Indians and Philadelphia Phillies cards from 1966, which both used a gray/red combo.

Topps didn’t really mix things up with the pose choices for Cardwell. Three of the cards are him looking off to the side, with this one being a bit more of a closeup than the 1964-65 cards. He’s shown as being with the Pirates on the 1963 Topps card, but that’s one of the old Topps tricks of getting a photo of a guy with no hat and cropping it so you can’t see the team name or any logos on the uniform. That allows them to use that photo in case the player gets traded during the off-season before the can get a photo with the new team. He was traded to the New York Mets after the 1966 season, but they actually got a Spring Training photo with the Mets and just inserted him into a later series in the set, thus avoiding the “no hat” trick. 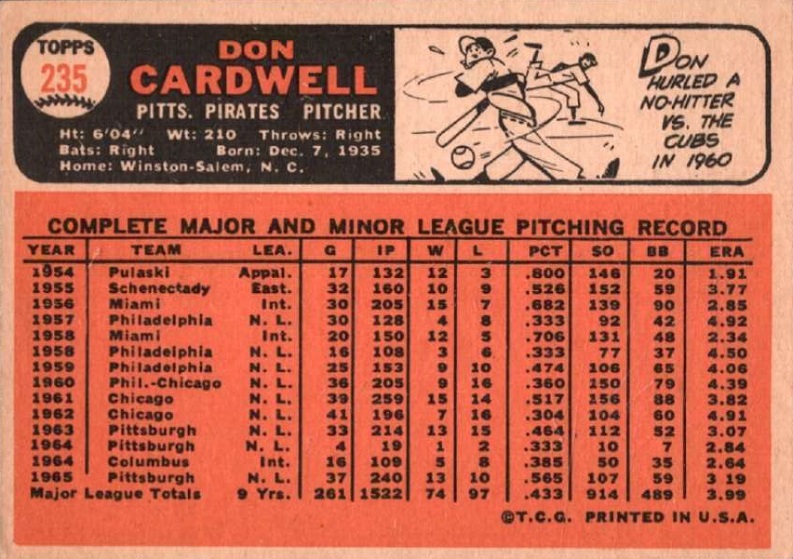 I really like what Topps did here. Despite having nine seasons in at the big league level already, they included all of his minor league stats, dating back to when he signed at 18 years old and dominated the Class-D Appalachian League. The note/cartoon at the top made me realize something that I don’t think I noticed before. He no-hit the team he played for in 1960. I’m willing to bet that hasn’t happened often…okay, it’s actually a mistake, but you couldn’t tell that by looking at the back where you see him playing for the Phillies and Chicago Cubs that season. It would be safe to assume (going by that cartoon) that he no-hit the Cubs while with the Phillies. In reality, the no-hitter came two days after he was traded to the Cubs and it was against the St Louis Cardinals.

Do you want one of these cards? There’s a magical place called Ebay where they allow people to sell cards to you, and you can scroll through them to find the best deal. This card can be had for about $2 from multiple sellers and it is in decent shape. That’s a bargain when you consider most new common cards are basically the same price due to shipping/selling costs. On the other side of the coin, there’s a PSA 9 for just under $50. There are autographed copies for $28 and $40, with the more expensive one being in marker, which looks better than pen. However, you go down to the $18-$23 range and there are a group of autographs to choose from. There’s a PSA 8 for $24 and another for $25. You have plenty of choices with him, with over 100 individual listings for this card, so happy hunting.