On Sunday night, Jim Kaat was elected to the National Baseball Hall of Fame in Cooperstown. In my opinion, it was long overdue, but I’ve learned that they don’t care about my opinion, otherwise Bill Dahlen would have went into the Hall of Fame years ago with his 75.2 WAR. That’s 3.9 more WAR in fewer games than another New York shortstop named Derek Jeter, the guy who people complained that he didn’t get every single vote on his first year on the ballot. Try waiting 110 years only to get snubbed again. Anyway, back to Kaat after that much needed tangent. You see the title and you probably know that he never played a game for the Pittsburgh Pirates. That’s only partially true, he never played a regular season game for the Pirates, but it’s not completely true, and that’s what we are looking at here.

Kaat had 283 big league wins near the middle of 1983 when he was released by the St Louis Cardinals at 44 years old. Pirates GM Pete Peterson said a few days later that he would discuss the possibility of signing Kaat with manager Chuck Tanner once the veteran lefty cleared waivers. After checking around baseball (including the Pirates) to see if anyone needed a southpaw out of the bullpen, Kaat decided to retire on July 19th. After the 1983 season ended, Peterson decided to extend an offer to Kaat to attend Spring Training in 1984, though he said at the time that he didn’t expect Kaat to take him up on the offer because the Pirates had a lot of big league ready pitchers already.

Kaat was actually going to sign with the Chicago Cubs for 1984, and it appeared that they had a verbal agreement, but the Cubs backed out, so he ended up going to Spring Training with the Pirates. He didn’t sound optimistic about winning a spot, but he did believe that if the Pirates weren’t interested by the end of Spring Training, that maybe some other team will want to sign him. At that particular time, the Pirates had 24 pitchers (including Kaat) and ten of them were left-handed. On February 10, 1984, it was announced that he had an invite to Spring Training, with one of the local papers saying that he didn’t even have a contract, just an invite.

Spring Training started at the end of February and it didn’t take long before Kaat was part of the injured list. The first notes about him said that he was introducing players to a martial arts drill for warm-ups, but then three days later it was announced that he was out with a left thigh pull. Just four days later, the local papers were writing about how Kaat didn’t run during warm-ups, but he was still outworking almost everyone else with his daily training.

Kaat pitched his first game for the Pirates on March 5th. It was an intrasquad contest and he started the game. He pitched the first two innings and allowed three runs. His first game that counted in the Spring Training stats was on March 9th against the Kansas City Royals. He pitched two innings, allowing solo runs in the third and fourth innings. The Royals put up eight runs in the second inning against Rick Rhoden, and the game ended in a 13-13 tie. Kaat tossed a scoreless fourth inning against the New York Mets on March 13th. Two days later against the Boston Red Sox, he had a shutout seventh inning, with no hits allowed.

Kaat faced the Royals again on St Patrick’s Day and he allowed two runs on three hits in one inning of work. It was mentioned that day that the Pirates had until March 25th to make a decision on him. When that time came without him making another appearance, it was announced that he was cut, as was veteran outfielder Ruppert Jones. Both players were actually asked to stay around until April 1st in case a spot opened up and they agreed. Kaat said that he hoped to catch on with another team, possibly the Detroit Tigers or Oakland A’s, who were both short on lefties.

You would expect that being cut would lead a player to stop playing for the team, but on March 26th, Kaat pitched the seventh inning against the Chicago White Sox and gave up two runs. Three days later, Kaat was used as a pinch-hitter against the Philadelphia Phillies and he hit an RBI single. That turned out to be a going away present because he was released two days later. It was his third hit of the spring.

Kaat pitched a total of six innings and allowed four earned runs on 11 hits. He was charged with six runs in the boxscores, so at least two of those runs were unearned. He never caught on elsewhere and retired into a career of broadcasting, which he still does to this day.

No one is going to call Kaat a former Pittsburgh Pirates player, but the Hall of Famer spent some time with the team trying to extend his career. If any Hall of Famer who is unclaimed by the Pirates should be revised, it is pitcher Red Faber, who spent 38 days on the active roster in 1911 without getting into a game. Kaat falls short of that mark, but check him out in the 1984 Pirates threads and tell me he wasn’t a former Pirates player… 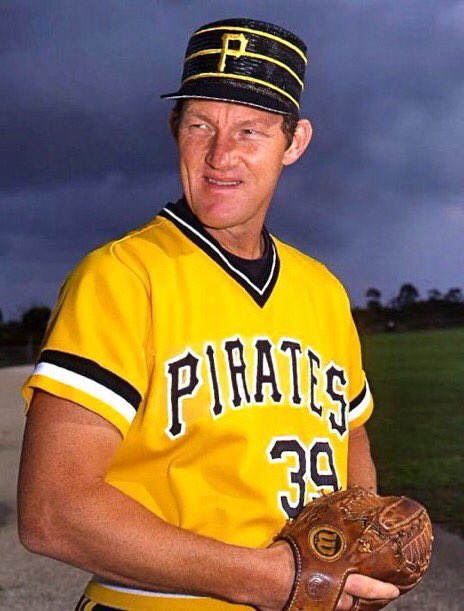 This Date in Pittsburgh Pirates History: June 29th, John Wehner and a Trade of Two Pitchers