Today’s Card of the Day comes from another set that I can’t believe hasn’t made it into an article yet, which is something I say a lot, so you would think I’d start believing it when it happens. I picked Neal Heaton as today’s subject because the Pittsburgh Pirates signed him as a free agent  on this date in 1988 and they received nice production over three seasons from the veteran lefty. I decided to see if I could use a set I’ve missed so far and I was shocked to find out that I haven’t used a 1990 Donruss, Fleer or Upper Deck card yet. You would think that 1990 would be a popular year for Card of the Day subjects because the Pirates made the playoffs for the first time in 11 years that season, but this article is just the fifth card from that year being used here as we enter our 21st month of this almost daily feature.

Depending on which players show up in the next few days in the daily This Date articles, I’ll try to get to the 1990 Fleer and Upper Deck sets right away. For now though, we take a look at card #658 from the 1990 Donruss set featuring Neal Heaton. 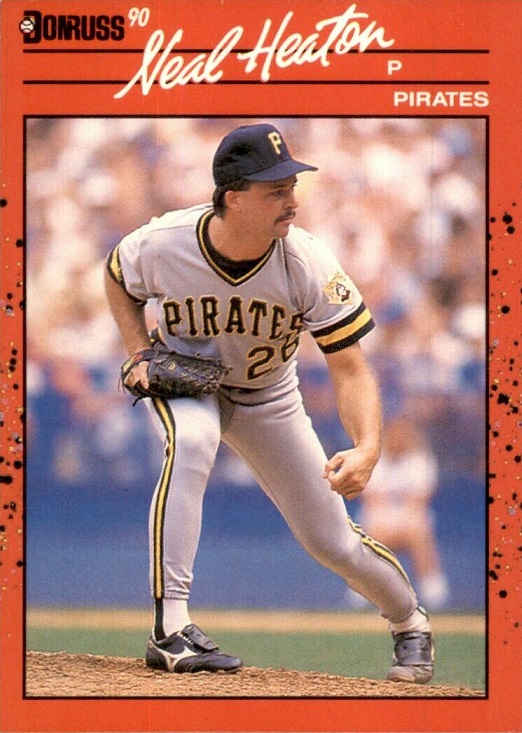 According to Wikipedia, bright colors and random paint splatter were popular in the early 1990’s. Donruss clearly knew what cool was, and they went along with the trend, giving us this design that does not stand the test of time. I would actually like this a lot more without the Petri dish look on the side borders.

This card is missing the Pirates logo, both front and back, but they got a nice full uniform shot of Heaton and you can see the great sleeve patch from the 1989 season there. I’m a fan of these old road grays, with the hat used from that year. 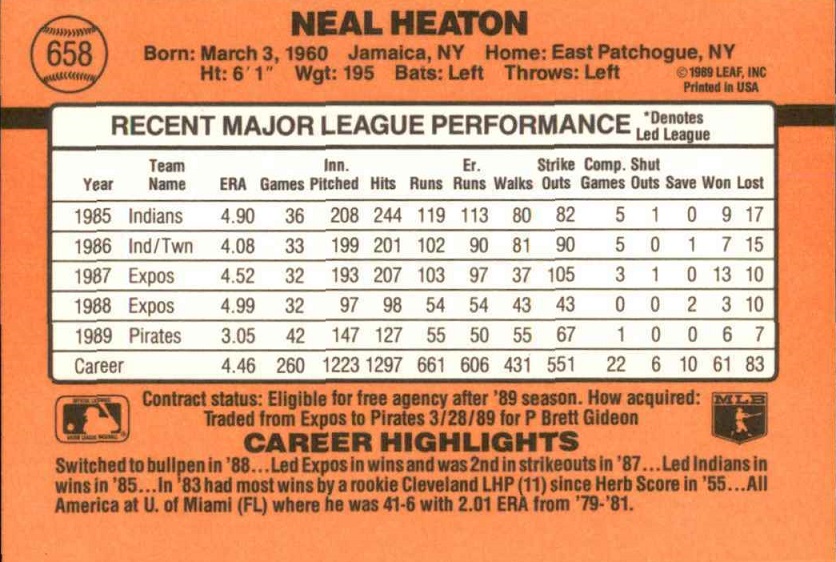 I’m sure if you collected Donruss cards throughout the 80’s and then someone asked you what you thought the back of their 1990 cards would look like, you would come up with this exact back design (colors and all) within your second guess. Donruss played “Hold my beer” versus Fleer in the “Who could be lazier with their back design?” contest. Fleer liked using racing strips down the back of cards, so Donruss handed their beer to someone standing close by and decided to just change back colors each year, though they had no trouble using similar/exact colors from previous years. I would say that they stuck with what worked, but I’m not a fan of the limited stats on back. I’ve said it before and I’ll say it again, that “Contract Status” section on the back is more helpful to research than you can imagine. I have no idea why it’s so hard to find in some cases, but Donruss backs have helped me with history articles in the past, and they will probably help in the future too.

As you might have guessed, this is a card that can be found easily on Ebay in the $2 range delivered, so I’ll get right to the other options. There’s an autographed version for $20 and another for $13, with the only difference being black ink or blue ink (cheaper one). There’s an unopened rack pack for $18 or best offer with Heaton on top (that sounds extremely high, but there is a best offer option). Someone is selling a Heaton Pirates lot of seven cards for $8 delivered and this card is in it. Then there are about 40 solo card auctions, just check the shipping before you hit buy-it-now.