Pittsburgh Pirates outfielder, manager and long-time coach/instructor Bill Virdon recently passed away at 90 years old. He played 11 years for the Pirates and took part in 1,415 regular season games. Today’s Card of the Day looks at one of his postseason games in which he emerged a hero due to his golden glove. Here is card #306 from the 1961 Topps set, which is titled “Virdon Saves Game”. 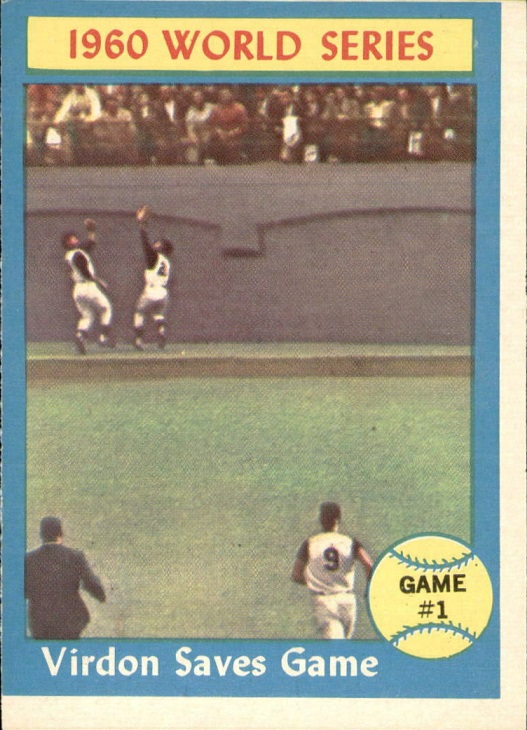 This scene here is a colorized photo from game one of the 1960 World Series. The card has some real firepower on there too. That’s Bill Mazeroski in the lower right running out on a long fly ball, just in case it landed. Next to our featured player is the great Roberto Clemente, who softly collided with Virdon after the catch was made about 420 feet from home plate. Just for completeness, I’m not 100% sure on the umpire, but an educated guess would say that it’s Bill Jackowski. He spent 17 seasons in the majors, and he was the second base umpire in this game. I assume that’s who was out there for this play.

Virdon got the headlines for this catch because it was a big play in a tight game. Another reason that it was noteworthy is that the Yankees were the original team to sign Virdon, but traded him away before he made the majors. To set the scene, the Pirates took an early 3-1 lead with a rally started by a walk to Virdon in the bottom of the first inning. The scored was the same in the fourth inning when the New York Yankees rallied. A single by Roger Maris and a walk to Mickey Mantle put the tying run on base, bringing up Yogi Berra, who drove one to deep right-center, where Virdon made a running one-handed catch right before the wall. After the game, which the Pirates won 6-4, manager Danny Murtaugh called the catch the key play of the game.

Virdon was surrounded by the press after the game to ask him about the catch. He was quoted as saying:

“I thought I could get it. I had a good beam on the ball. Yes I have made better catches, but none which gave me a greater thrill.” 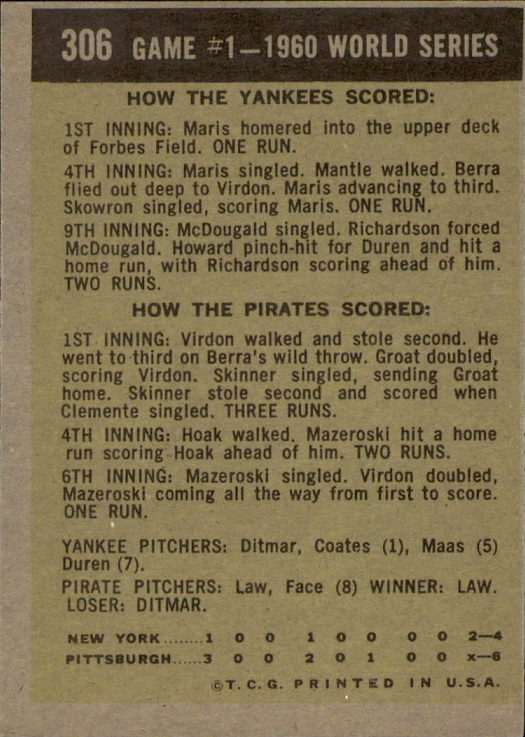 It’s interesting to note that the back only sort of mentions the play that they thought was the most noteworthy from game one. Each game in the series got a card with an event from that game. Sure the play is mentioned, but no details of how it saved the game. It’s almost buried by the fact that the Yankees added a run that inning after the catch. One of the interesting scoring plays in this game was that Mazeroski homered, scoring what was the winning run of this game. A hidden sign of things to come perhaps?

This card can be bought cheap off of Ebay, though I’ll note something really interesting that I noticed while scrolling through scans. The centering on this card is awful, which is odd for a center fielder (that’s a bad joke, I know it). That keeps the price down EXCEPT when you find a high grade copy. You will have no trouble picking up a copy for around $5 delivered, but a PSA 8 recently sold for $350. Another one actually ended higher, though the price is hidden on Ebay because the seller accepted a lower offer. I’ll warn you now that there is a card graded as an 8 that is available for $200, which seems like a sound investment, but the grading company really matters. It’s not a PSA card, and being PSA adds value, both when you buy and later when/if you go to sell.