This is the first time that we have featured the 1987 Fleer set here, which is an incredible fact to me. We have been going since last March, with Card of the Day articles almost every day, occasionally throwing in a different feature if there’s something else I feel the need to write about on a particular day. That’s a long time to go without posting a single article about what I consider my favorite Fleer set from the 1980s.

A few years ago someone asked me what my favorite Fleer/Donruss/Topps sets were from the 1980s and after thinking about it for much longer than one person should think about cards from the 1980s, I came up with 1987 for all three sets. I had no idea that all of my favorites were from the same year until the question was posed that specific way. I will note than the Fleer set from that year is my least favorite of the three, but it would still be top five/six if I put all of the 28 sets in order (only Topps made a set in 1980). The 1981 Topps set would be ahead of it, and maybe 1982, which I know some people don’t particularly care for as much as other sets from that time period. I also like the 1985 Donruss set more.

I have not been waiting for a good day to write about Junior Ortiz to include the 1987 Fleer set, but those two paths have crossed today. It was 37 years ago today that the Pittsburgh Pirates acquired Ortiz for the second time. The first time was as an international free agent in 1977, while the second time was during the Rule 5 draft in 1984. He played 13 seasons in the majors and seven of those years were spent with the Pirates. The 1987 season was his fifth year with the team and he batted .271 in 75 games that year. Before that year started, Fleer assigned him #616 in their set and gave us today’s Card of the Day subject. 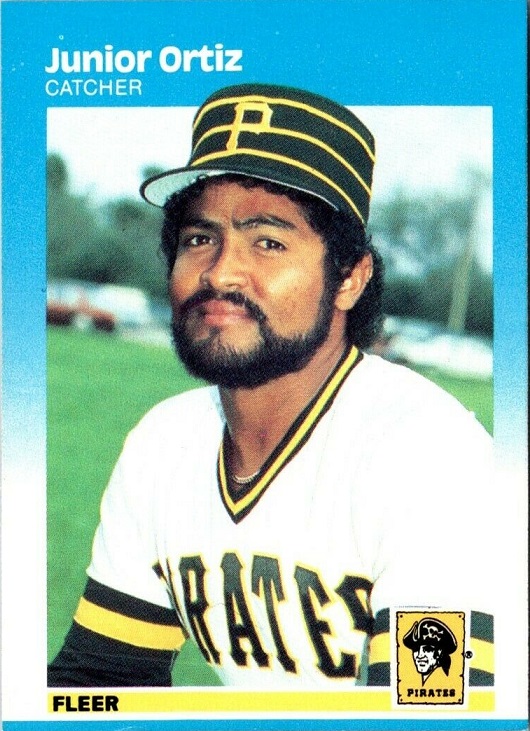 One of the reasons that I like these cards is that logo you see in the bottom right corner. It’s one of my favorite all-time logos and it didn’t always show up on the front of cards from that era, though Fleer seemed to realize that it helps the eye appeal more than the other companies did. They included it on each of the last seven sets from the 1980s. I’m not really sure why I like this set more than others, it’s not like the borders use team colors (maybe that yellow stripe at the bottom, but that’s relatively small). It’s also not like that blue is a favorite color of mine, but it just works. I’d like to hear what other people think. I’m having trouble deciding on my second favorite, though I will say that the 1989 Fleer Pirates cards do have added eye appeal over the set itself.

While it doesn’t help the case of this set over other Fleer sets, you have to love the look of the uniforms from that time period, especially with the pillbox cap. 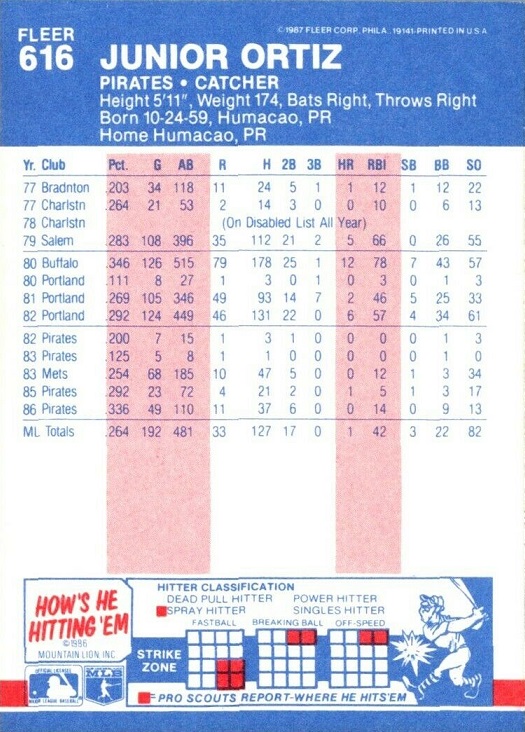 The backs are a lot like all of the Fleer backs from the era. That found something that they liked in 1983 and just rolled with it, adding racing stripes to the stats to make them go faster. These cards had an interesting addition at the bottom, with the strike zones to show you what kind of hitter Ortiz was at the time, and where he liked to get pitched. I always wondered how much time was put into these reports. It’s not like now when you can just go online and look these things up. These were supposedly reports from scouts about each player, which is a lot of work to do for a set with 660 cards (not all had that report, but most did, noting that obviously the pitching ones were different).

If you want this card and you follow this series regularly, that I’m sure you already know about a place on the interwebs called Ebay, where this can be had from multiple sellers for around $2-$3 delivered. The only noteworthy auctions are three autographed copies. Two are in marker and Ortiz has a nice signature. One is for sale for $10, the other for $15. Then there is one signed in pen, which just doesn’t look as good to me on cards, and that’s reflected in the price. You can get that for $5.