My favorite all-time baseball card set is the N172 Old Judge set that was produced from 1886-1890. It’s one of the most amazing card sets in existence. Over 500 players are pictured in the set in real photos taken in studios and even some outdoor scenes around the United States. Many of the players included in the set have no other known photos. I might have been the only kid in a long time (since the cards were new?) who wanted an Old Judge card (that was already over 100 years old) before my ninth birthday. I know I was eight at the time because I got a baseball card calendar at Christmas for the upcoming year that I turned nine and one of the cards pictured in it was an Old Judge card. As soon as I saw it, I said I need to get that card some day. It took about 16 years, but I got the card pictured in the calendar (Hall of Famer Buck Ewing/pictured with the team mascot).

Before I got a job, I was getting Old Judge cards as birthday/Christmas presents only, then once I got a job I started buying them often. One of the areas of the set that I started buying was players pictured on the Pittsburgh Alleghenys. I got all but one of those players, then Deacon White made the Hall of Fame in 2013 and the prices of his cards skyrocketed. I do not have a Deacon White card on Pittsburgh still to this day. They are extremely rare and when they do come up, there are about 50 collectors who need/want him for their collection. Most can’t pay the prices. It’s me, I’m most…unless I sell some other expensive card(s) to get it. Anyway, James “Deacon” White was born on this date in 1847, and he spent part of the 1889 season with the Pittsburgh Alleghenys, which resulted in some interesting Old Judge cards, including this one shown below. 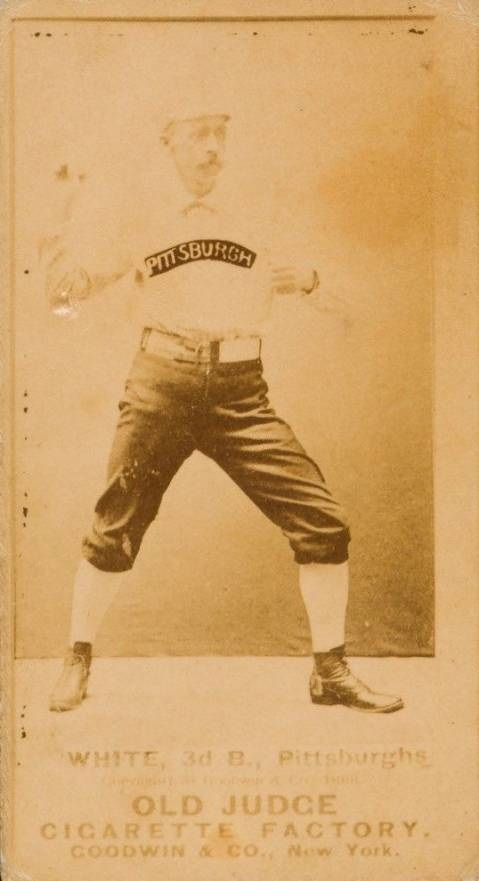 The photo here is a bit faded which is common for Old Judge cards, especially ones that were reissued from a previous year. In general, you will see some sort of fading with a good percentage of these cards, which are all at least 131 years old. However, the photos that were used multiple times tend to see this issue more often. An Old Judge card with no fading is a glorious sight.

I wanted to use this scan for a particular reason, and it wasn’t to talk about the fading issue. The uniform you see above is not a Pittsburgh Alleghenys uniform. It’s one from the Detroit Wolverines taken in 1888. When White switched teams in 1889 to Pittsburgh, they reissued two of his cards (he has nine poses) with a new team name (see Pittsburghs at the bottom after his last name/position). On the other card, they only switched the team name at the bottom, but on this particular card, they did some 19th century photoshopping to put “Pittsburgh” across his jersey. The second most interesting thing about that fact is that the uniforms didn’t say Pittsburgh that year. They didn’t say anything. They were rather plain looking that season.

White is an under-appreciated Hall of Famer, with some people saying that he was a fringe choice based on a career 45.7 WAR. What that hides is that he was already a good player before Major League Baseball existed. That didn’t come around until he was 23 years old. He also caught a lot, which was much more difficult back then due to the inferior equipment. The other lost issue is that he played most of his career before seasons were 100 games long. WAR is an accumulating stat, so imagine if you could add in around 1,000 more games in his career to make up for the unavoidable late start AND the limited schedule. Assuming he went along at the same rate, then he would have been a no question Hall of Famer. It’s hard to punish him for things beyond his control, so his Hall of Fame case is solid in my book.

If you’re interested in buying one of his Old Judge cards, get out the checkbook and be prepared to write some zeros in that price number. This particular card shown would probably go for about $3,000 if it came up for auction. That’s the minimum really, because with this set, you just need two bidders who really want it and they can drive the price.