Today’s Card of the Day helps celebrate a man who made quite a mark on the Pittsburgh Pirates, despite spending just one season with the team. Reggie Sanders, who turns 54 years old today, played right field for the 2003 Pirates and hit .285 with 31 homers and 87 RBIs. He didn’t have a ton of cards with the Pirates because he didn’t sign with the team until March, and he became a free agent at the end of the year, but some card sets put him on 2004 cards with the Pirates, even though he was gone before they came out. One of those cards was from Topps and featured Sanders in a pose that was quite different from the usual portrait/swing photo choices that we usually see from players. It caught my eye my scrolling through potential options for this article, so here’s a look at card #2 from the 2004 Topps set featuring Reggie Sanders. 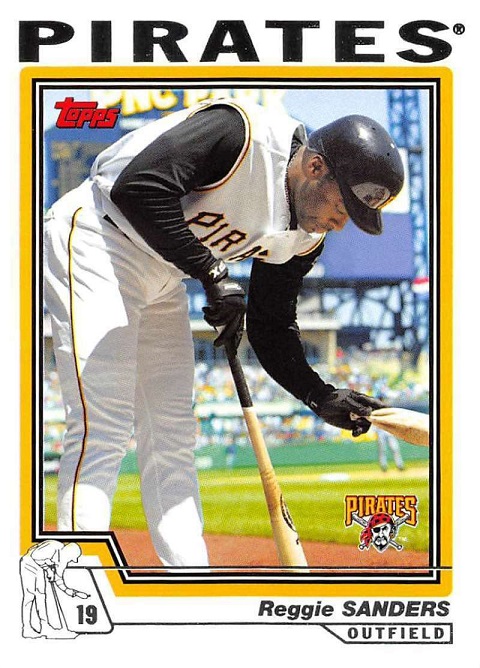 As you can see, this is definitely a different pose. It’s an extreme closeup of Sanders, who almost looks like he was shoehorned into the card frame. I really like this because it is different. I also like the fact that they used team colors on the front as part of the design. They also included the great logo from 2005 in the photo, where it adds to the card without taking anything away from the photo.

The other great thing here is that Topps included an outline of a player in the bottom left corner and it’s exactly the same as his pose. It’s a throwback to the idea that they used in 1976, but it’s also completely different because those cards had generic poses for each position, while the 2004 Topps cards mimic the specific photo. For good measure, they threw in his uniform number. Here’s a fun fact: Sanders wore #16 for every other team that he played for during his career. Aramis Ramirez had #16 already when Sanders joined the team, then after Ramirez was traded, Jose Hernandez was given his number. I wonder if Sanders thought about taking it after the trade, or did he just want to ride the success he was having that season as part of baseball superstition rituals? 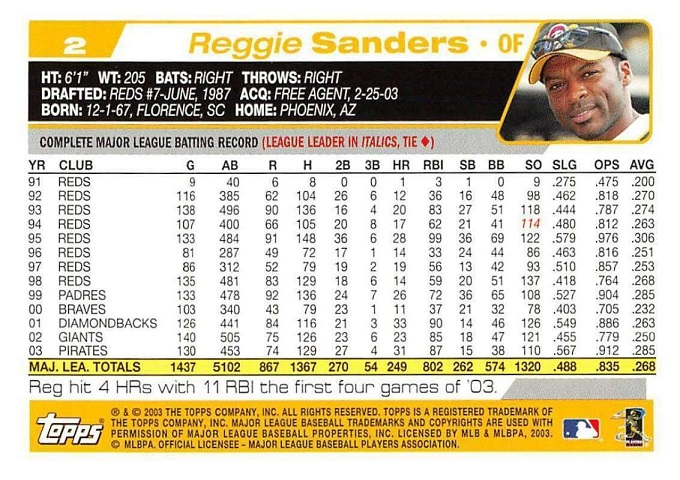 I’m a big fan of the back of 2004 Topps cards. I like that they use the team colors on the back. I also like that the stats are easy to read, which many of you know, that wasn’t always the case with Topps cards. I also like the fact that the point out league leaders, although in this case all Sanders got was a strikeout crown during the strike-shortened 1994 season, so he could probably do without that feature. If you remember Sanders with the Pirates, then you probably remember the fast start he had to the season, which is pointed out at the bottom of the card just below the career stats.

There isn’t a lot to say about this card as far as price. As a fan of the Pirates who remembers Sanders with the team, this would be a cool card to possess. I’m sure many of you in the same position, feel the same way. That was a frustrating season for a few reasons, but he made it fun to watch the team. There are plenty of options on Ebay available in the $2-$3 range. There are some tougher variations to consider. There is one with a black border that goes for between $11 and $20 and three are available on Ebay right now. Those were limited to 53 copies. Then there are chrome versions that go for around $5-$8 each, including a chrome black refractor that seems cheap at $6 delivered. Then there is a gold version that is easier to find and it can be had around $5.