Today’s Card of the Day comes from the 2005 Donruss set and it features Craig Wilson, who turns 45 years old today. He played four different positions for the 2001-06 Pittsburgh Pirates. I got wordy in the price section, so let’s get right into the card, which is a Diamond Kings card with some added goodies (I’m pretty sure that’s the first time I used “added goodies” in a card article). 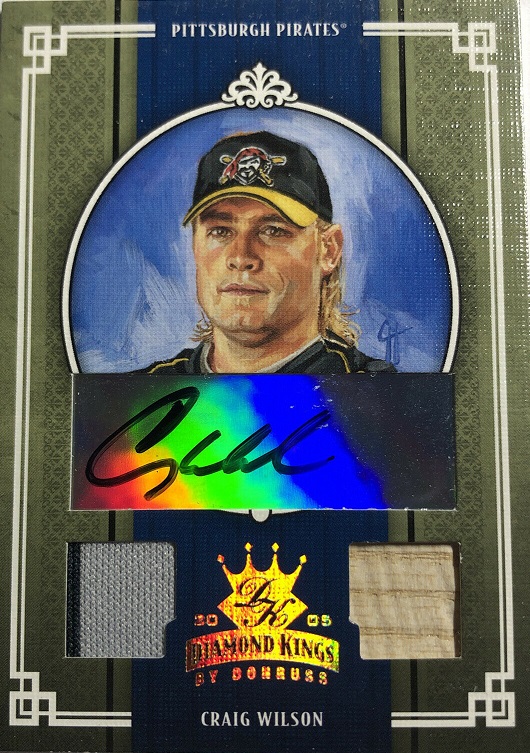 Let me start by saying that it was impossible to find a good scan of this card that didn’t have a watermark from the seller. This was the best and the card was scanned on an angle, so a bit of it is cropped off and in the top right side you can see a bit of the scan background. The same thing happened with the back scan. There are plenty of options for this card, as you will see in the price section, but no great scans.

Also you can see, there’s a portrait style artwork of Craig Wilson wearing a cap with the old logo, which is a favorite of mine (more on that below). This card is autographed by Wilson, or so we are told. That looks like it could possibly say “Gill”, which I only say because “Cill” makes no sense. In the bottom left, you get a piece of a jersey that he wore in a game. On the bottom right, you get a sliver of a bat that he used in a game. You’ve got a nice Diamond Kings symbol between the two game used items, giving you a card with a lot of goodies on the front 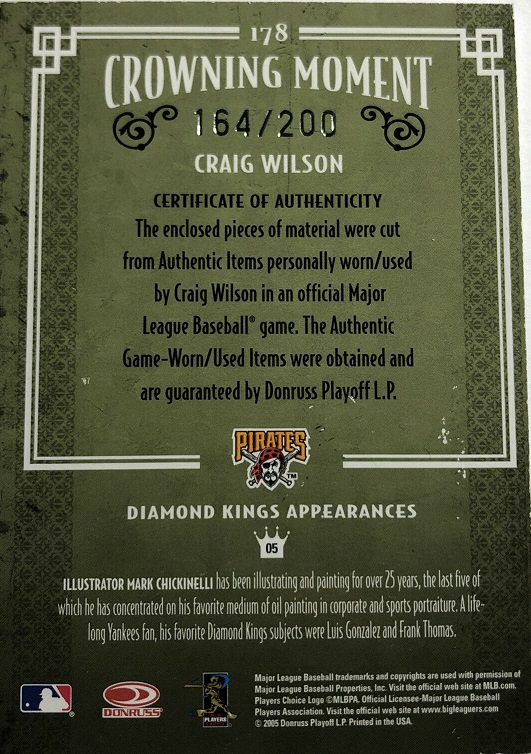 All of the good stuff is on the front…except that great Pirates logo that they were using before, during and after 2005. That’s such a great logo and now they have just the letter P like it’s a logo brought to you by Sesame Street. I’d like to hear from one person who honestly likes the current logo the best. Don’t get me wrong, it looks great on hats, but it’s boring and all of the previous ones are so much better.

Anyway, the back just guarantees that the items on the front are real and game worn or game used by Craig Wilson. Also, up top you see that this card is numbered to 200 copies and this one is #164. The actual card number (#178) is just above that. I was going to mention that Wilson looks more like John Kruk on the front of the card, but then I realized that the name of the illustrator is on the back with a little fun fact added in, so I didn’t want to call out his work. I’m glad I didn’t do that.

I mentioned up top that the price section will be interesting. Let me just say that if you want this card, you have plenty of options to choose from, but there are some subtle difference between some of the options. I really wanted to use a 1-of-1 card, but the scan wasn’t good and there wasn’t a back scan either. The card I did use is listed for $8.66 delivered, but that has a “make offer” option, so you could get it a little cheaper if you’re collecting on a budget. The 1-of-1 card is $60 plus shipping. Funny thing about being the only person who has a 1-for-1 card, you set the market. If you like the card, then you set the price higher, to a point where you like the money more than the card. At what price point would you not have seller’s remorse? That’s the price…assuming you like it. If you’re just going for resale, then you leave yourself open for offers and let the market play itself out.

There’s also a black version that is numbered to ten. There’s a silver material version that is one of 50 available. There’s also another one with red writing in the middle than is numbered to 100 copies. Besides all of that, you can get this card autographed without the game used pieces or vice versa, with no autograph and the game used material is included. There are variations of both, and if you just want no frills, there are variations of the card with no autograph or game used pieces. Those are the cheapest ones out there, and it’s just the basic Diamond Kings card. The 1-of-1 card is the most expensive, and the rest range in price from $5-$20 range.