Today’s Card of the Day comes from an oddball set from Topps that was produced in 1981. The main objective with the set is to ruin the value of the cards…at least that’s the way I see it. Today’s featured player is making his first appearance in this series in exactly one year, and his third overall appearance. That Hit Man is Mike Easler and today is his 71st birthday. Let’s get right into the photo for those who don’t know about the 1981 Topps Scratch-Off set. 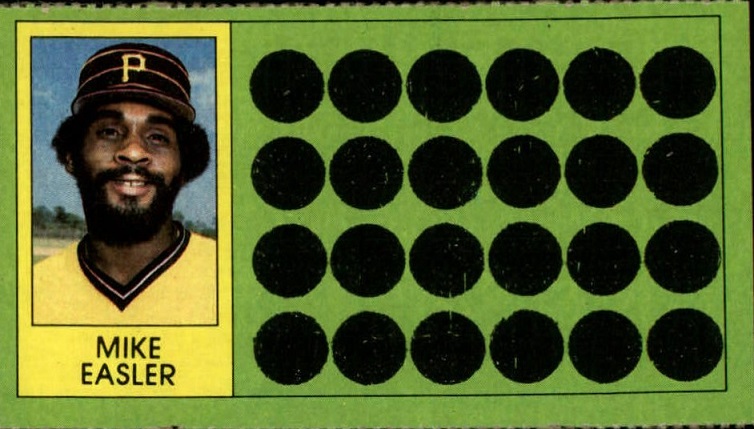 First I’ll mention the borders of this card. I left some of it visible so you can see that it’s rough on the top and bottom. That’s because these cards came in sheets of three and Easler was in the middle, though the players around him weren’t always the same. I’ll also note that Easler was always with National League players on his cards, and the NL players had the green background you see above. The American League players had a red background. Not all of the NL players had that yellow box you see around his name. It looks like they went with Pirates colors here, but it’s probably just a coincidence. The boxes were red, yellow, pink, orange and blue, though there were no green on green/red on red cards. 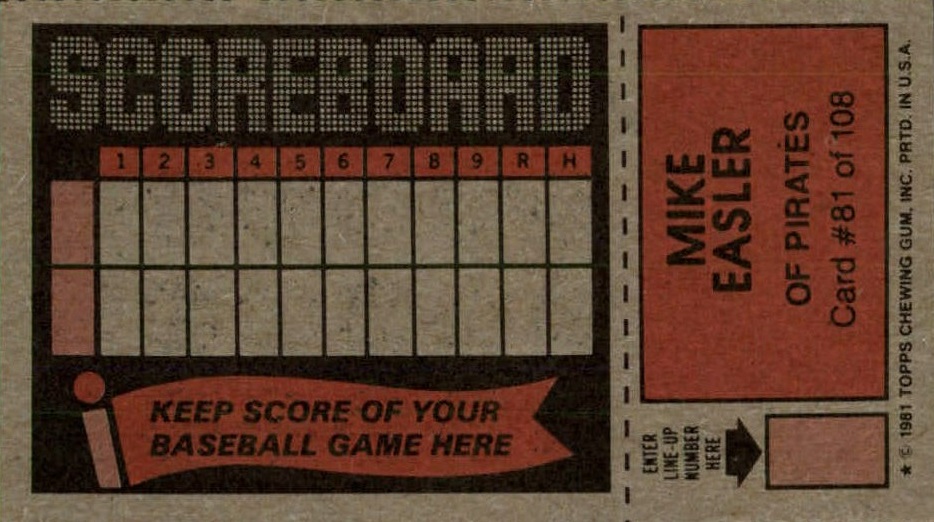 The back of the card requires a bit of explaining. As mentioned above, these cards came in panels of three. Easler was always the middle panel, so he always had the same back. These panels had the rules of the game on the top panel, the scoreboard on the second panel, and an offer to buy a hat on the third panel. It’s really amazing how many of these panels were kept together and people didn’t use them for the intended purposes. You can find more full panels than solo cards, despite the perforations there just begging you to rip them apart. These cards really are more about the game than the players. The front just has that small photo and the back tells you almost nothing about the player other than his name, team and position.

You can find these on Ebay with many options to choose from. If you just want the Easler card, there are four auctions for just the Easler card alone, and you can grab one of those for about $3 delivered. Then you could go for the full panels, with the choices being Easler with: Ted Simmons/Art Howe, Ted Simmons/Jerry Martin, Bill Buckner/Ken Griffey Sr, or Pete Rose/Art Howe. The prices on the full panels range from $4.50 to $15. The Rose card gets a little extra attention. Finally, there’s a PSA 9 of the Rose/Easler/Howe that is for sale for $70, if you feel like going high-end.