Today’s Card of the Day is a new set in this series. Don Hoak has been featured here once and it was one year ago today. That “coincidence” is due to the fact that the Pittsburgh Pirates traded him away on this date in 1962. Since it’s been a year since he’s been here, now’s a good time to look at one of his other cards, and why not make it a new set while we are at it. In 1962, JELL-O released a baseball card set consisting of 200 cards, which came with their products. In 1963, they made a second set and it too had 200 cards. Card #140 in the set featured Pirates third baseman Don Hoak. 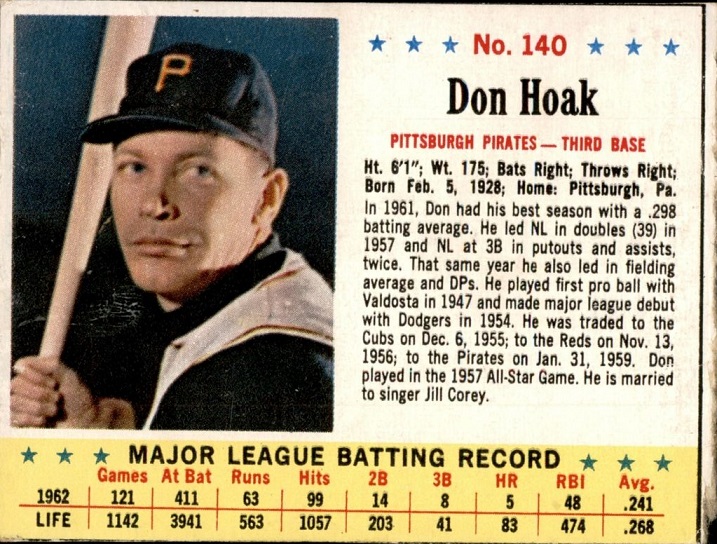 These cards look a lot like the Post cards that we have featured here a few times, and the differences are really subtle. Those Post cards were printed on the backs of Post cereal boxes, while the JELLO-O cards were printed on the back of JELL-O boxes, which were much smaller. That means that any of these cards that you see now were hand-cut UNLESS they are still part of a complete box. Very few of the boxes still exist, so most cards that you find from the set look like what you see above, which rough edges and uneven borders. One way to tell them apart is that the sizes of the cards are different, with Post cards being slightly bigger, but that’s something that is hard to tell without a comparison card. Also, the size of these cards really depends on the butcher who cut them off of the box and how much border they left. The JELL-O cards are supposed to be 2 1/2″ x 3 3/8″ in size, but that’s just wishful thinking in most cases. No one was cutting them with a razor and a ruler, so if you measured across the top and across the bottom, you’ll probably get different measurements.

Another difference is that the line in the middle of the stats that goes from left-to-right on the card is smaller on JELL-O cards, but once again, you need a Post card for comparison to really see the difference. Unless you really know the sets well, then you’re probably not going to be able to identify them without comparison cards.

I don’t usually look into the off-field life of players, but that note at the end of this card caught my eye about Hoak being married to singer Jill Corey. As most of you know, Hoak passed away suddenly at a young age, while in pursuit of a stolen car. That happened in 1969, so because of how long it has been, I was somewhat surprised to read that his wife just passed away this year in Pittsburgh.

I like these cards. They are colorful cards with a nice photo of each player, a bio section and a good selection of stats. Usually I’d rather see year-by-year stats, but I’m okay with the the one-year/career layout if they’re using the extra space for good purposes. The price of the cards is also a nice highlight here, which leads us to the pricing section…

These cards are rare, but that doesn’t necessarily make them expensive. There are only three Hoak cards on Ebay right now and they range in price from $9.50 to $14.99, which includes delivery cost. Only one has sold over the last three months and that one went for $4 total BUT some careless individual wrote “Phillies” on that card, no doubt after the trade that sent Hoak across the state. Writing on the back of cards takes away value, but writing on the front really kills the value. There was one 1962 Hoak JELL-O card on Ebay in the last three months and that went for $72, so that’s quite a difference in price from one year to the next.