Today’s Card of the Day comes from the 1914 Cracker Jack set and it features Pittsburgh Pirates pitcher Marty O’Toole. His name is probably only familiar to die-hard fans, but he was one of the biggest prospect deals in team history and things didn’t go exactly as planned, which gained him more negative publicity than him probably hoped for from his big league career. He ended up with a 25-35 record in Pittsburgh, despite looking strong when he first arrived to the team. When these cards were released, he was already fading out, going 1-8 in his last season with the team before being sold to the New York Giants near the end of the 1914 season. This 1914 Cracker Jack set is an iconic set in the baseball card game. It’s still extremely popular, and even players like O’Toole go for a big price, as you will see in the price section below.

Marty O’Toole was born on this date in 1888 in William Penn, Pa., so let’s put those disappointed feelings aside and praise the man who was good enough to make it to the majors for five seasons. Here’s card #54 from the 1914 Cracker Jack set, featuring 25-year-old right-hander Martin James O’Toole. 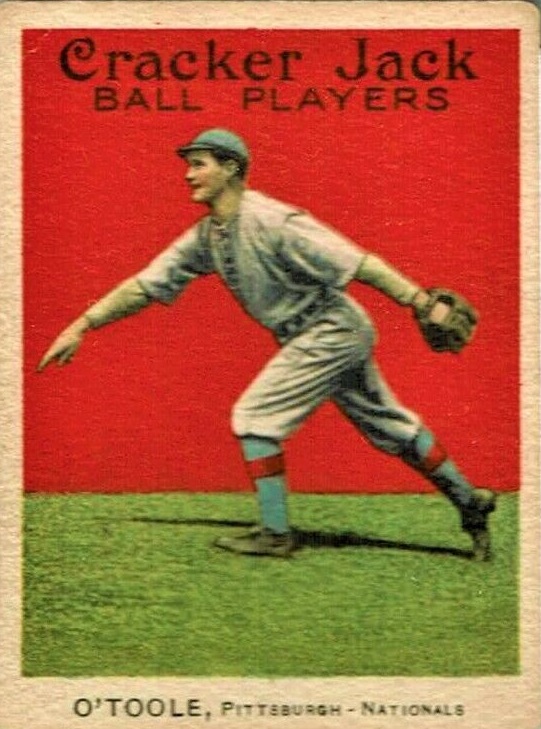 You have probably seen this card design somewhere, either with the original cards, which were printed in 1915 as well, or the multiple replica/reprint cards produced, or the more recent sets that have borrowed this design. It’s an iconic set, partially due to the Shoeless Joe Jackson card included, but there’s a lot of star power in this set. They showed the card of Joe Jackson (actually showing Ray Liotta) in the movie Field of Dreams. We also looked at the Max Carey card back in the early days of this series.

All of the cards have that bright red background, along with some decent artwork, though some like this O’Toole have the players with more of a generic look, but it’s still a great design. He’s pictured here wearing the 1912 uniforms, which is the first year that the word “Pirates” shows up on the uniform. They did a good job of getting the uniform colors correct, which didn’t always happen back in the day when cards were artwork. 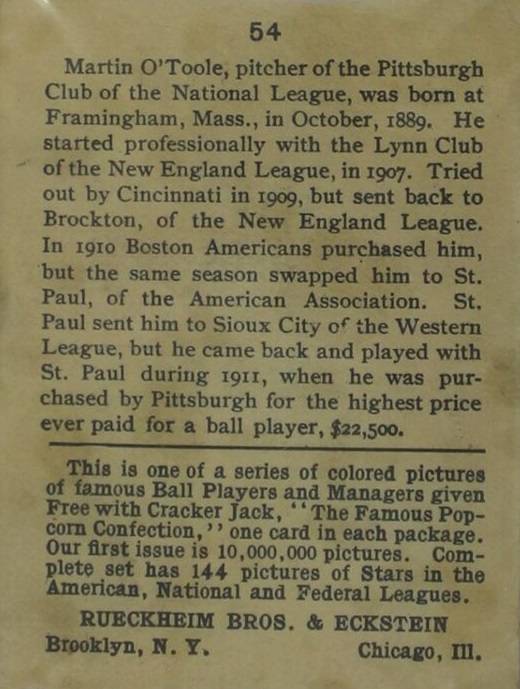 The back has a nice bio section on O’Toole and lets you know that when the Pirates purchased his contract, it was the highest price ever paid for a ball player. He was highly sought after at the time and Pirates owner Barney Dreyfuss had to outbid other teams for his services. Not only that, they also purchased his catcher, William Kelly, who wasn’t cheap either. The pair was supposed to help the Pirates regain their glory from the previous decade, but neither lived up to the billing.

The title of this article tells you that this is a 1914 card, but you can’t tell that from the front of the card. It’s the back that gives it away. The 1914 set tells you that there are 144 cards in the complete set. The 1915 cards tells you that there are 176 cards. There’s one easier way to tell them apart, but you wouldn’t know it if I just shared the scan. You’d have to see it in person. I have to explain this because I don’t want to assume people flip cards over the same way. Some of you are animals.  Picture this card in a graded holder with a PSA sticker up top telling you the grade. You flip the holder to look at the back and the grading sticker is still at the top, you’re just looking at the back of that sticker now. Got it pictured? If the card is from 1914, then the back will be right side up and easy to read. If it’s a 1915 card, the back will now be upside down. The cards are also printed on different stock, but to tell them apart that way, you would need to see one from each year and then know which is which.

I mentioned above that this card isn’t cheap, whether you want the 1914 version or the 1915. I would say don’t worry about the year if you wanted it, no reason to limit your choices for subtle changes unless you’re collecting a specific set. The lowest priced one on Ebay right now is $200 and it is low grade. There are seven listed right now between the two years and the highest priced one is $880 for a PSA 4. These aren’t for the average collectors, so you could always get a reprint for a few bucks. It looks somewhat similar, but you won’t be fooled side-by-side.