Today’s history article has some firepower with former Pittsburgh Pirates born on this date. You have Richie Hebner, a member of the Lumber Company, who rejoined the Pirates later in his career. You also have Bob Walk, long-time pitcher, who has been an announcer even longer. Then there’s Bob Elliott, a slugger for the Pirates during the early 1940s, who was a three-time All-Star during his eight seasons with the Pirates. I went with Elliott from that group, simply because the other two have been featured in this series before. This also gives me a chance to feature a set here for the first time, mostly because there aren’t many options available for Elliott. He played most of his career during the war years and there’s almost nothing available for baseball cards during that time period. So here’s a first look at the 1939 Exhibitions Salutations set, along with a first look here at Bob Elliott. 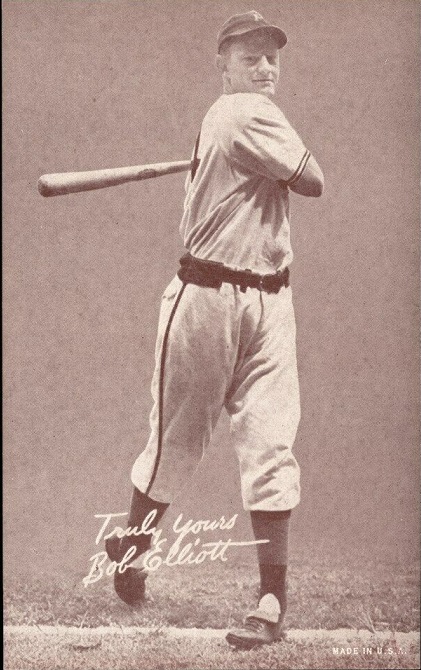 Sometimes with old cards, it pays to know your uniform history. I’ve mentioned plenty of cards here where the photo was much older than the card. With Bob Elliott here, you just need to know Bob Elliott history, though I’ll show how the uniform history helps. He debuted in 1939, and this set was put out in 1939, so that’s a 1939 photo. The 22-year-old debuted in September that year, so that photo was taken right before these cards showed up. This set is actually labeled as being from 1939-46 because that’s when it was being distributed. Due to that reason, I wanted to make sure that Elliott was actually printed that first year when he barely played.

The front of the jersey usually has some telltale signs to help with uniform recognition, but you don’t need that with this card. As a quick side note, that follow-through swing pose you see above was extremely popular for cards back in the day. Now back to the year identification. See the stirrups there and how it has a large lighter color band near the top? That is red (the rest is a dark blue) and the only year that Elliott was with the team when they wore those colors is 1939. They used them before then, but not afterwards. So you have two ways to tell that this is a 1939 photo.

This set is called “Salutations” simply because they wrote salutations on the front of the card along with the facsimile autograph. Bob Elliot says “truly yours” here. There are other greetings available, such as “sincerely yours”, or the Arky Vaughan card in the set says “best wishes”. The “Exhibit” part of the card title is the name of the company that distributed these cards, which are bigger than standard cards. They’re often referred to as being postcard size. The actual dimensions are 3 5/16″ x 5 5/16″.

Despite the age of these cards, being produced over multiple years makes them a bit easier to find, and that keeps the price down. There are actually nine of these for sale on Ebay right now and the highest priced one, which is graded SGC 60, is just under $50. They can be found for as little as $7 delivered from a reliable seller, with another major selling having it for $9, with a best offer option. Elliott was a very good player for the Pirates, so he’s one you should add to your collection.