Today’s Card of the Day is one that I thought about immediately when I came up with the idea of making this series a regular feature on our history site. It is one of the most interesting cards out there, and I’m not limiting that to Pittsburgh Pirates cards. This is one you’ll just have to see for yourself before I talk about it, but there’s a reason why I put Jim Weaver in the title ahead of two Hall of Famers and it’s not because he was born on this date in 1903. Let’s get right into the card photo…

As you can see in the photo, Jim Weaver was a large human. He’s not just 1930’s large, he’s large for right now. He’s listed as being 6’6″, 230 pounds, though all pictures with the Pirates that I’ve seen show that he was stocky/strong, so that weight might be a little light. Funny thing about baseball weight listings is that you only get one and not many players stay the same weight throughout. Babe Ruth for example is listed forever as 215 pounds. He was lighter than that when he came up, heavier than that at times for sure, but at some point he was 215 pounds during his career.

At some point, the man who they called Big Jim was 230 pounds, and he was also the heaviest player in the majors for a time. He’s pictured on this popular card from 1936 carrying two Hall of Famers like they are little children. Paul and Lloyd Waner were not large humans. They were barely medium humans, even for the time. Paul Waner’s forever weight is 153 pounds, while his brother Lloyd checked in at 150 pounds. That’s about 303 pounds of humans (in full uniforms) being held up by Big Jim Weaver while waiting for someone to take a photo.

Weaver wasn’t just a sideshow. He played eight years in the majors and had back-to-back 14-win seasons with the Pirates, who apparently moved on from him due to his age and not due to performance. They had a loaded pitching staff going into 1938 and they were said to be going for more of a youth movement. At least that’s what the papers said, so the 34-year-old Weaver was sold to the St Louis Browns, and the average age of the pitching staff that season was 28.4 years old.

As for the card themselves, it was a 120-card set that got the name “Fine Pen” only because of the style of signature on the front, and how it compared to a similar set during that time. The writing on this set was thinner, hence the name Fine Pen. These are often card premium photos due to their size (3 1/4″ x 5 3/8″) but if you’re looking for information on them or trying to buy them, they are part of a large group of items called “cards” even though many don’t fit the standard idea of a card image in your head. The R313 is just a catalog number given after the fact. The “R” tells you that it was in the candy/gum group of cards from this time period. There are card set names that start with the letter “E”, which are classified as early candy cards, and we covered a number of those sets here.

This particular card can also be found in a colorized version from 1936 (more on that below), which looks like this… 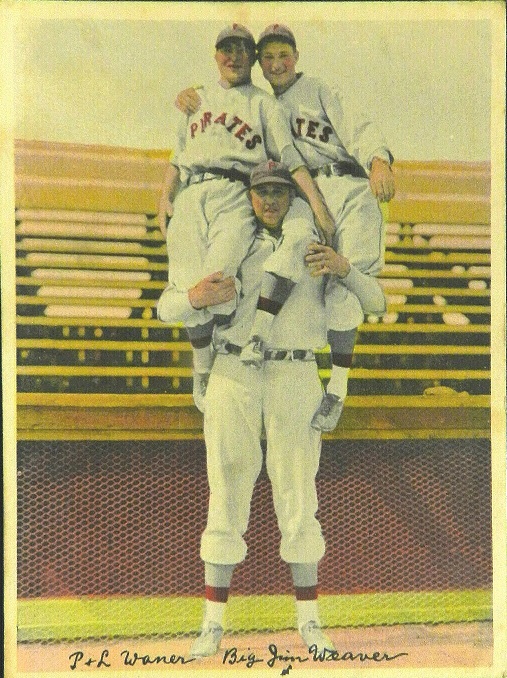 There is only one example of this card selling on Ebay in the last three months, and there is just one active auction that is going for $75, which is high compared to the sale price we know. I wrote this about a week before it posted, so you might want to double check if you’re interested. The only closed auction for this card is the one shown above and it went for $39 delivered. I would have paid that price if I saw it, so if you do want to grab this card, you might be bidding against me next time it comes up. If I win, I’ll forgive you for your transgression. You may be more interested in the colorized version (search R312 Weaver), which is tougher to find and more expensive. There’s one on Ebay right now that is lower grade and the price is $89. The one pictured above is $145.