Pittsburgh Pirates pitching great Bob Friend was born on this date in 1930, so it makes sense that he shows up in this feature today. I was surprised to realize that Friend has never had a solo article here before. I included him early in the process on a 1959 Topps card called Buc Hill Aces, which also had Vern Law, Elroy Face and Ron Kline on the front. I also tricked myself a bit because we have a scan of a card uploaded for him, but it was used as the main photo for past articles that weren’t card related. Here’s another surprise to me. This is the first 1953 Bowman card that I’ve featured here. That’s partially due to the fact that there just isn’t much to say about the design of these cards, at least not on the front. Let’s get into the front of the card right now, looking at card #16 in the 1953 Bowman set, featuring Bob Friend. 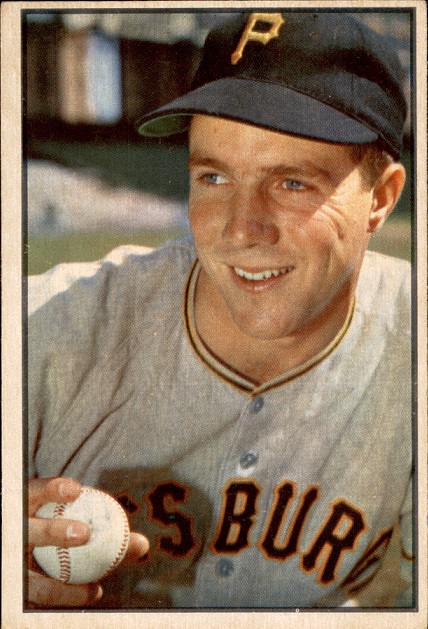 The 1953 Bowman design is as simple as you can get without it just being a photo. Small white border, black box around the photo, and call it a day.

Here’s an interesting exercise. Scroll through Bob Friend cards on Ebay and see how many of them are just him in a staged pose, looking like he just released a pitch. Maybe it was just the scans I looked through before I decided which card to use, but the percentage of cards in that pose was about 75%. So this particular photo stood out a bit in that group just because it wasn’t the same as the others. 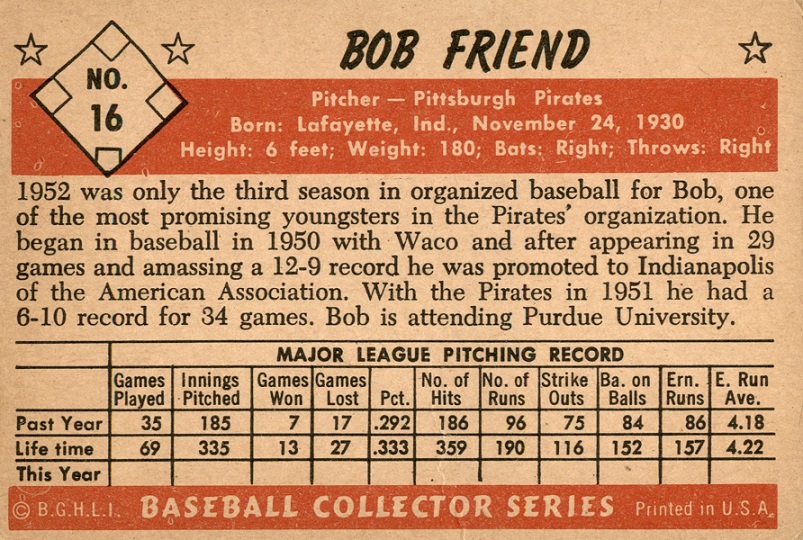 In 1979, TCMA issued a set of star players from earlier years and it was basically the same exact thing as a 1953 Bowman card, both front and back. The one big difference, really isn’t that big, but it’s noticeable side-by-side. The 1953 Bowman cards are 2-1/2″ by 3-3/4” in size. That’s 1/4 inch taller than modern cards. Doesn’t sound like much, but if you’ve handled a lot of regular sized cards, then look at 1953 Bowman cards, you can see the difference.

Friend ended up his career with 197 wins and over 3,600 innings pitched, so you can tell that this is very early in his career, even if you didn’t read the first line of the bio. Poor Bowman had no idea back then how to abbreviate stats. Just look at all of that wasted writing. How strange is it to not see runs and earned runs not next to each other? The 50’s were a wild time.

One interesting thing on this card is the last line of the bio section. It says “Bob is attending Purdue University”. I checked to make sure that was still true at the time that these cards were printed and sure enough he was still going there. Friend mentioned in the article that I found from January of 1953 that his pitching record didn’t really match up with the way that he pitched in 1952, but he expected big things in 1953. The Pirates finished 42-112 in 1952, so a 7-17 record means that he was a little better than everyone else combined. He improved to 8-11 in 1953, and the Pirates improved to 50-104…imagine improving to 50-104? He jumped the gun on his big improvements by two years. In 1955 he won the National League ERA crown, or as Bowman would put it, the E. Run Ave. crown. Does anyone else read that as East Run Avenue?

This Friend card is easy to find on Ebay, though you have to wade through the reprints. The regular card vs reprints is a fairly easy difference to spot when looking at the front. The reprints have bigger borders/smaller photos. The highest price on Ebay right now is $400 for one that is graded PSA 8.5.  If you go one grade down, a PSA 8 card be had for $232, which is the second highest priced card. That’s not a good deal though, because there’s a PSA 8 for $165 delivered. If you want an autographed copy, you can pay $45-$60 for an authenticated one. If you just want a presentable mid/low grade copy (ungraded) you can find a few around $10 delivered.