In series 2 of the 2019 Topps set, they included a subset of cards with two players on each card who were connected through stats. One of those cards paired up the two greatest players in Pittsburgh Pirates history, Roberto Clemente and Honus Wagner. Their statistical connection is a very interesting one. They both played 2,433 games for the Pirates, but there’s an interesting story that I will get into below about that stat. I picked this card because of Clemente, who was taken by the Pirates in the Rule 5 draft 67 years ago today. Scrolling through card images, this one caught my eye because I’ve never seen it before, so that was enough to decide to write about it. I’ll give a nice hat tip to Topps here for making this particular card #21 in the subset, whether it was intentional or not. Let’s get right into the card and story. 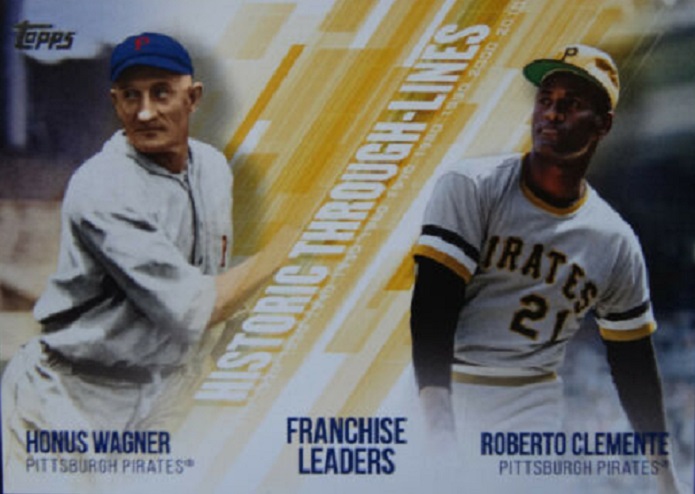 This was a surprisingly tough card to get a good scan of for this article. One high quality scan had a green line from the scanner going right through Wagner. A few others had watermarks from the sellers. This is lost some quality when I made it big enough for the article. I actually got a much better back scan. Topps included two great action shots of these Pirates greats in similar throwing poses. 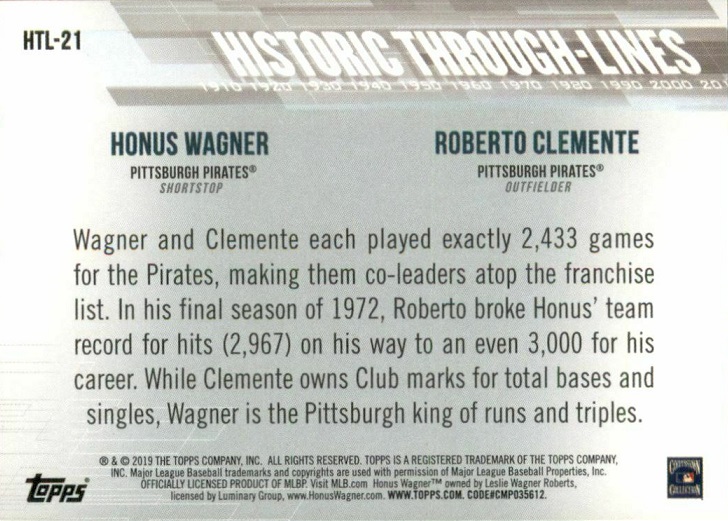 The back tells you about the two players ending with 2,433 games, but there’s an interesting story behind that stat. You often hear that when Clemente collected his 3,000th hit, it came in his final at-bat. Without context, it adds a little drama to the outstanding achievement. Clemente doubled in the fourth inning on September 30th, then left for a pinch-hitter in the fifth, which was actually Bill Mazeroski, which would be an interesting fact people would know if Clemente finished with 3,001 hits, but putting that out there takes away from the whole last at-bat drama. It was only his last at-bat because he left early on September 30th and then didn’t start any of the last three games of the season. I’m sure if he needed his 3,000th still he would have batted another 12-15 times before the season ended.

Anyway, the point of mentioning his 3,000th hit is the famous video of him collecting that hit shows a stat on the big scoreboard that says Clemente tied Wagner in games played that day with 2,432. Since he got the hit, he wasn’t going to play again before the NLCS started, but he ended up playing a game on October 3rd as a ninth-inning defensive replacement in right field, giving him 2,433 games played. That was lucky for history reasons because Wagner’s games played total was wrong and he actually had one more game that they thought that day, so getting that defensive assignment unknowingly made that possible. The reason Clemente finished with 2,433 games played is obviously a sad fact because his career wouldn’t have been done at that time, but that being said, it really seems fitting that the two greatest players in franchise history finished tied in games played. Wagner was limited due to injuries during his final season, which kept him to just 2,433 games for the Pirates, allowing one great to finish tied with the other 55 years later.

This card isn’t too common on Ebay, with eight current auctions up and just two closed auctions for sold cards in the last three months. Rarity plus star-power does not equal high price though. In fact, five of those eight current auctions can be had for $3-$4 delivered. The others are only higher due to higher shipping costs. So basically, you can add this great card to your collection without withholding your child’s allowance for some trumped up charges, just so you can have extra money to spend.