I haven’t featured many Topps Traded cards in this series yet, though I did one article about all four Pittsburgh Pirates cards from the 1982 Topps Traded set. There aren’t really a lot of Pirates Topps Traded cards to choose from, especially compared to the sheer number of other Pirates cards. The sets were small and they weren’t around as long as Topps has been around, so it limits the choices. One of the former Pirates players born on November 21st is infielder Bill Almon, who played for the 1985-87 Pirates. He joined Pittsburgh on April 8, 1985 after he already had a 1985 Topps card showing him on the Oakland A’s. So Topps decided to snap a shot of him with the Pirates and include him in the 132-card Traded set that they released later in the year. This is the first appearance of Almon in this series. 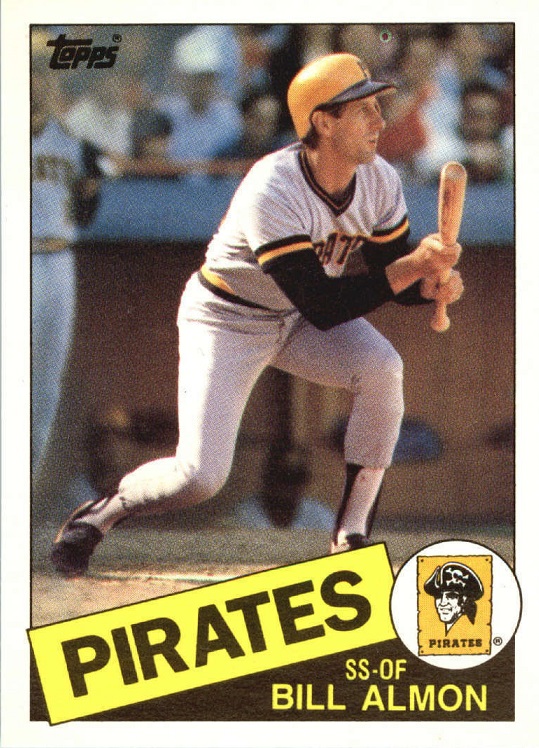 When designing the front of baseball cards, the use of team colors is very important. That’s a direct quote from me, which I believe to be true. The 1985 Topps set didn’t have a great setup for their design, but those yellow/black letters for the team name, player name and position looks great here. Then you have the 1985-era logo, which is one of my favorite Pirates logos (might actually be my favorite of all). I like how they reversed the black writing/yellow background for Pirates, compared the yellow writing/black background for the name and positions. What really sets it off is the 1985 road grays and that great looking batting helmet. It’s a nice looking action shot of Almon too. 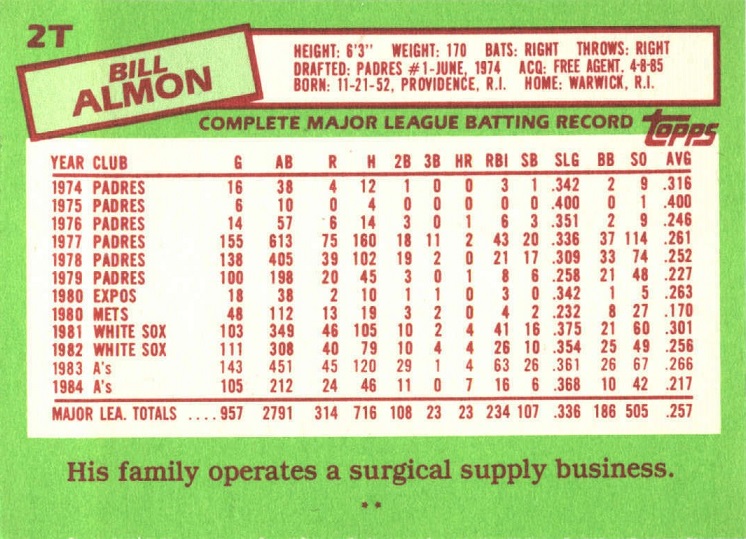 Just by looking at the front, you can’t tell the difference from a regular 1985 Topps card and the Traded cards. They are easy to tell apart on the back. The first giveaway is the different colors. Traded cards had bright backs and white backgrounds, while the regular cards had that gray background you see almost every year, along with darker green/red colors. The other giveaway is also obvious, but doesn’t stand out as much as that bright back. The number here is “2T”, telling you it’s the second card in the Traded set. Almon got #2 because the set went in alphabetical order.

Almon is an interesting player in baseball history. He was the #1 overall pick in the 1974 draft. I’ve heard people say that he was a draft bust, and while that might be true in some sense, the guy played 1,236 games in the majors. I think it’s fair to say that he was a below average first overall pick, but he also had a nice big league career. However, the San Diego Padres definitely could have done better with the pick. The 1974 draft was a strong one at the top, with Dale Murphy, Willie Wilson, Lonnie Smith, Rick Sutcliffe and Lance Parrish all going in the first round and finishing with 33+ career WAR. All of them would have been successful first overall picks. Even Garry Templeton would probably qualify for that, as he finished with 27.8 WAR and was once good enough to be traded for a Hall of Famer entering his prime (Ozzie Smith).

Almon finished with 4.6 career WAR. Obviously not an impressive number, but it was better than 15 of the 24 first round picks that year. If you look at the first overall pick from the first year (1965) through 2015 (it’s too soon for 2016-2021), you see that Almon ranks better than 18 of those picks. Out of 51 picks during that time, he basically ranks in the lower middle tier of the group. The average first overall pick is worth 22.5 WAR. If you put that into Pirates terms, Dick Groat was worth 22.5 WAR for the Pirates during his nine seasons in Pittsburgh. So Almon was below average compared to other first overall picks, yet just over 1/3rd of the other first overall picks ended up worse. In a group of 51 players, how many can you consider busts before you realize that the expectations might be too high for the term “bust”? I don’t think there’s a specific answer that is correct, but I’m sure you could find people who think 22.5 WAR for a first overall pick is a bust, yet that’s exactly what you should expect according to the numbers.

If you’re interested in this card, it’s easy to find on Ebay and rather inexpensive. There are currently 30 auctions for the card. The only two of note are both autographed. One is $10, the other is $5. One person is selling four of these cards in case you need three extra as stocking stuffers, giving your friends or family Almon Joy. If you just want a copy for yourself, there are a number of them that are $3 or less delivered.