Today’s Card of the Day comes from the 2015 Topps set, which is the first time that it’s being featured here. This is also the first time here for Jeff Locke, pitcher for the 2011-16 Pittsburgh Pirates. Locke is here today because it is his 34th birthday. The 2015 Topps set is here just because it hasn’t been used yet. It’s not a design that I particularly enjoy, but every set gets its chance here whether I like it or not. Here’s a closer look at card #589 from series two of the 2015 Topps set, featuring Jeff Locke. 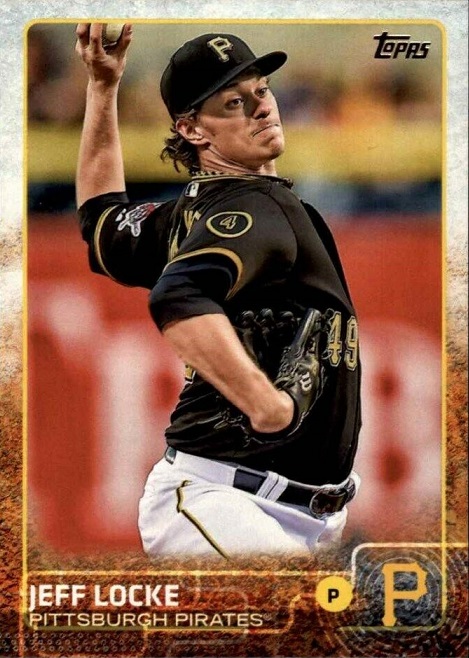 This feels like someone signed off on the design ideas, not realizing that they were actually multiple individual ideas. One person suggested a light blue marble design, someone wanted an autumn day. Another person thought that the Pirates logo should be the epicenter of an earthquake. How about we draw random lines at the bottom like a children’s placemat maze? Only if I can just add a bunch of dots for no reason in the bottom left-hand corner! Let’s break for lunch the boss says, as someone wonders “Why do we wait until 11:50 on the final day to design the new cards?”. We just do, Richard. We just do.

Usually I give extra points for including the logo, but that epicenter look ruins it for me, plus that is probably my least favorite team logo. One funny thing here about the logo is that the little circle for the position actually makes a better Pirates logo than the actual one. Has more of a 1970s feel and from what I’ve heard, those were good times in Pittsburgh, though 2015 was a pretty good regular season. At least the photo quality here is great. A nice action shot. I like that particular uniform top, and a nice added touch is that you get to see the Ralph Kiner tribute patch on the sleeve. 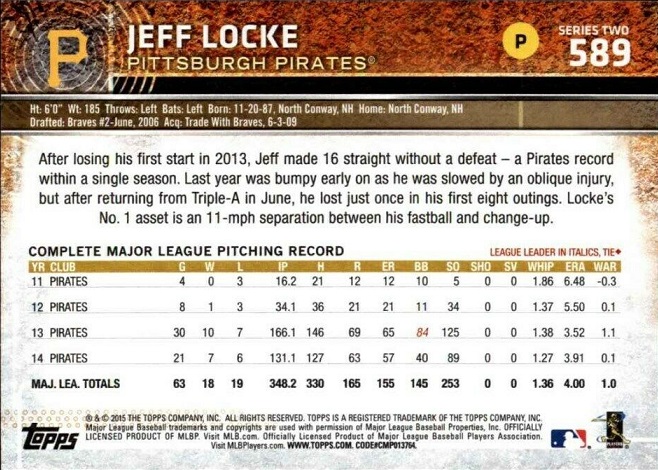 If you didn’t like the front design, how about seeing the top/bottom reversed on the back? Maybe some people actually do like it. No judgement if you do. If we are being honest, it actually does look a little better on the back, maybe because the maze is missing and it doesn’t take up as much space as the front, but I still don’t get the circles and epicenter logo part. What I like about the back is that the stats/facts are easy to read. Always a plus for me.

If you’re interested in this card, then there are a few versions available besides the regular card you see above. Topps issued 2,015 copies of this card with gold borders on the front and they are individually numbered on the back. Those are tougher to find than the base card, but not tough to find in general. There aren’t a lot of people out there trying to put together gold border sets, so gold cards of specific common players don’t really have added value. There are tougher ones to find, such as a mini version, which is literally just that, a smaller version of the base card. There’s one called a rainbow foil version, then another called a snow camo, which the only copy on Ebay right now is actually mislabeled as a refractor. Surprisingly, all of these versions, including the base card, can all be found around the same price ($4 delivered). The base card and gold version can also be found for a little cheaper. I’ll note that one particular gold version for sale right now is #1971, so that World Series winning year might have some added interest for someone. In addition, there are limited number versions of a black border (64 copies), pink border (50 copies) and platinum (one copy), which exist, but aren’t on Ebay right now.