Pittsburgh Pirates Trade History: A Large Trade That Sort Of Happened with the Reds

I’ve done a few articles looking at trades that supposedly almost happened according to old newspaper articles. If the article had enough details that it didn’t just sound like a rumor, and it was interesting enough to write about, then I’ve done just that in the recent past. It’s been a while since the last one, but some research last night led me to a trade proposal on December 5, 1958 that sort of happened at a later date.

The actual trade in question here happened on January 30, 1959, and it was a major deal at the time that paid off huge for the Pittsburgh Pirates. They gave up slugging corner infielder/outfielder Frank Thomas, outfielders John Powers and Jim Pendleton, and pitcher Whammy Douglass, in exchange for third baseman Don Hoak, catcher Smoky Burgess and pitcher Harvey Haddix. All three of those players helped the Pirates to their World Series title in 1960, but the deal almost didn’t happen, and it’s a bit surprising to hear what the Pirates turned down two months earlier.

The December 5, 1958 issue of the Pittsburgh Press detailed trade proposals between the Pirates and Reds at the baseball winter meetings. In that lengthy article, they said that the Pirates were willing to give up the power-hitting Frank Thomas in exchange for Hoak, Burgess and Haddix as part of a six-player deal. So far, that’s nothing different from the original deal, but here’s where things stray. The Reds were also willing to include pitcher Tom Acker, but they wanted the Pirates to throw in pitcher Bennie Daniels. The Pirates said no and countered with pitcher Curt Raydon. In retrospect, the Pirates could have given up both Raydon and Daniels, let the Reds keep Acker, and it still would have been a great deal. That’s right, Bennie Daniels almost kept the Pirates from making a great deal that helped them win their third World Series title.

It sounds a bit amazing that two months after turning down a deal, the Pirates ended up sending three players to the Reds along with Thomas. Let’s look at the deal they turned down and what they would have been giving up/receiving. I’ll mention that you have to keep in mind that players aren’t guaranteed to play a specific way despite everything else changing. Just because Don Hoak had a big 1960 season in Pittsburgh, doesn’t guarantee he would have done the same if he stayed with the Reds. All we have is their results with the new team though, so that’s what we are going by for this exercise.

Here are the WAR values for each player in the proposed/denied six-player deal, from 1959 until the end of their career. I would do it a little different post-free agency, but back in 1959 these players were with their new team until they retired or the team moved on:

So just going by WAR posted by the players after the proposed deal, the Pirates would have received players who combined for 41.3 WAR in 23 seasons, while the Reds would have received 7.3 WAR in 15 seasons. I know you don’t want to think about it, but that’s the type of thing that would have haunted the Pirates to this date if they didn’t rectify the situation almost two full months later. Offering Raydon instead of Daniels was a smart move by the Pirates. Raydon got injured in 1959 and 1961 and never made the majors. Obviously neither team knew about future injuries, but they would have been giving up a guy that had zero value after 1958. The problem was that after the Reds said no to that deal, the Pirates didn’t shrug and say “we tried, but we’ll do the deal with Daniels included”.

Here’s a look at the deal in WAR, using the same method as above, but as the trade actually happened:

Douglass, never played in the majors after the deal

The Pirates somehow turned down an amazing deal, waited exactly eight weeks later, then made a better deal to get the same main players. They did that by substituting three players for one, while giving up the fourth player from the Reds in the deal. They got three players who compiled 40.7 WAR in 22 seasons, for four players who put up 4.0 WAR in 12 seasons. If you’re just looking at averages, you’re trading 22 years at 1.85 WAR for 12 years of 0.3 WAR. In other words, it would basically be like trading Goose Gossage (41.2 WAR in 22 seasons) for Rod Barajas (4.6 WAR in 14 seasons) before either made their big league debut, then you get to sit back and watch how that played out, as Gossage stamps his ticket to Cooperstown.

So knowing all that we know now, I’ll just leave you with this headline and beginning of an article, which was also from the Pittsburgh Press, this from their January 31, 1959 issue. Enjoy. 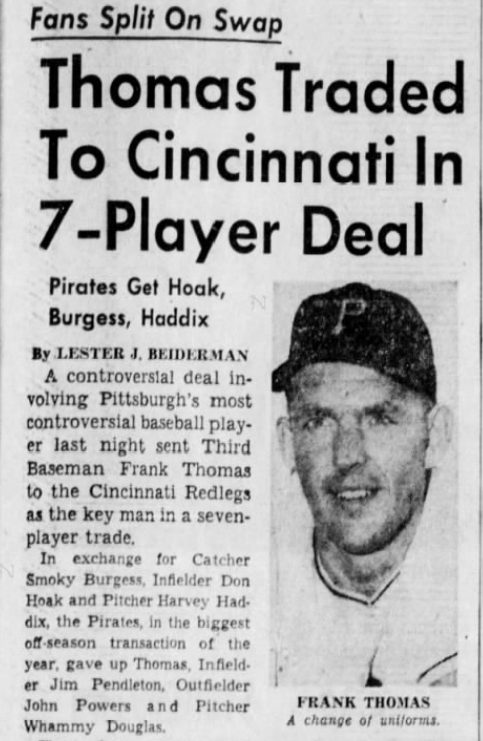 John Dreker
I was originally going to title this the St Louis Browns/Baltimore Orioles trade edition. For those who don’t know, the…

John Dreker
On December 10, 1975, the Pittsburgh Pirates and Kansas City Royals agreed on a four-player trade that included Al Oliver…