Today’s Card of the Day comes from the 1961 Kahn’s Wieners set and it features Pittsburgh Pirates first baseman Rocky Nelson, who was born on this date in 1924. He played for the Pirates in 1951, then returned to the team for the 1959-61 seasons. He forever etched his name in Pirates lore by hitting a two-run homer in the first inning of game seven in the 1960 World Series, which got the scoring started in the 10-9 Pirates victory. A company called Kahn’s, which was widely known for their hot dogs, produced baseball sets during this era, and Nelson got a spot in their 1961 set, which is our Card of the Day today. 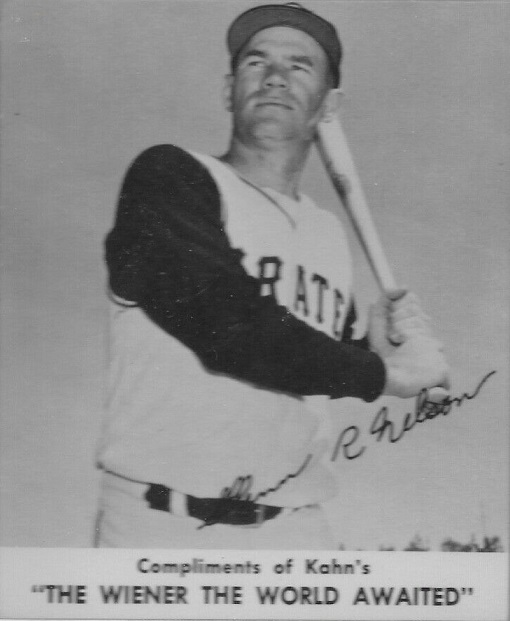 Unless you’re mature, the first thing that you notice is the slogan for Kahn’s Wieners, which I am told by this card that they are “the wiener the world awaited”. This card is compliments of Kahn’s. For as much research as I do about players, sometimes I never inquire about their actual name. Some player’s such as Smoky Burgess, get enough mentions over the years by their first name that I know what it is without looking. I’ve have talked/written/heard about Rocky Nelson probably thousands of times over the years (mostly because of his game seven homer in the 1960 World Series) and I would have never guessed that his first name was Glenn. Despite not knowing that, I’ve seen this card a few times before and right there on his facsimile autograph is his real name. So I decided to use my Newspapers.com subscription to see how many times “Glenn Nelson” shows up in print during Rocky’s time in the majors. To my surprise it wasn’t that rare, though obviously a majority of the mentions said Rocky. In fact, many of the “Glenn” mentions were in an article that got passed around about player nicknames.

Before 1961, Kahn’s cards were only distributed individually with packages of hot dogs. They released a 43-card set in 1961 and people were able to get the entire set via a mail-in offer, so these cards are a bit easier to find in better condition. They aren’t easy to find though (see price section). 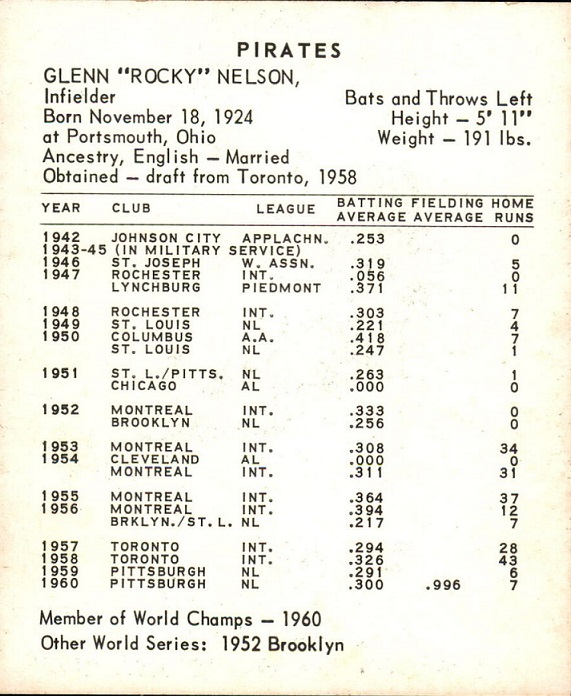 This card has an interesting set of stats to include. Batting average and home runs are pretty standard, but I’m not sure that if you could only include one other category, it would be fielding percentage. I think the natural suggestion for a 1961 card would be runs batted in, since after all, those three categories make up the triple crown categories. It also would have made more sense here, since they only had one year of fielding stats to include. One other point of interest on the back is that they included ancestry. Nelson claimed to be from Married England I guess. All of this time I’ve been saying Merry Old England and it’s actually Married. Learn something new every day.

I mentioned above that these cards aren’t that easy to find and Ebay confirms that fact. Just two are for sale right now on Ebay and only one has sold in the last three months. The one that sold went for $22 delivered in nice shape. The active auctions are going for $280 for a PSA 8.5 (that’s great condition for a 1961 card) and the other one will be a completed auction by the time you read it. It’s an actual auction setting and the seller listed it for ten days, start at just 99 cents, plus $4 shipping. Maybe I’ll check it after this article goes live to see where it ended, but unless someone lists one in the next few days, your only option is going to be an expensive one.