Today’s Card of the Day features Tom Dettore, a pitcher for the 1973 Pittsburgh Pirates, who didn’t get any cards during his time as a player with the Pirates. Today is his 74th birthday and I wanted to celebrate the man who not only made it to the majors with the Pirates as a local kid, but he went on to have a long career as a minor league pitching coach after his big league time, which included ten seasons with the Pirates. It was that second stint with the team that allowed me to include him in a card of the day article.

In 1988-89, the Pirates had an affiliate in the short-season Appalachian League from Princeton, West Virginia. It was the first year for a pro team in Princeton, and they still have a team to this day, except it changed to the MLB sponsored Collegiate Summer League in 2021 as part of their massive overhaul of the minors. Dettore was the pitching coach on the 1989 team, which in retrospect looks like one of the worst outcomes that you can get from a minor league team. It produced one big league player, and that was first round pick Willie Greene. The team finished with a 32-37 record, which was the sixth best record out of ten teams, so they weren’t exactly awful players for the level, it’s just that only one player from the group made the majors (more on Greene later).

When the company called The Star Company got into the minor league game, they really went hard, with team sets and separate smaller sets for prospects. They mass produced cards in 1989 and then quickly faded from the game. They gave us today’s Card of the Day though, featuring Tom Dettore as the pitching coach of the 1989 Princeton Pirates. 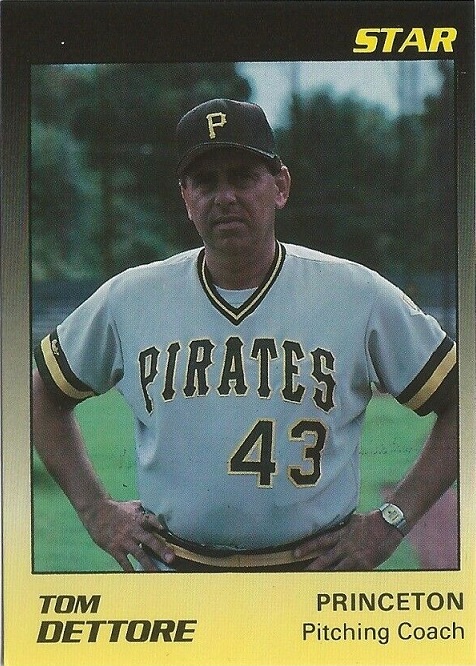 Star did something in 1989 that I really appreciate on cards, as every reader should know by now. If you’re familiar with minor league cards in this era, they were usually all the same setup, regardless of the team/level. The same borders were used throughout all of the minors. Star decided to use team colors in the designs, so the Pirates affiliates all got this card border design that faded from black at the top into yellow/gold at the bottom. I like how they used the black writing at the bottom and the yellow/gold at the top.

As you can see here with Dettore, the Princeton Pirates basically looked like the regular Pirates jerseys at this time. In fact, if you just saw this photo without the team identification, you might not realize that it’s a minor league coach. He played pro ball from 1968 until 1977, which brings up an interesting note on the back… 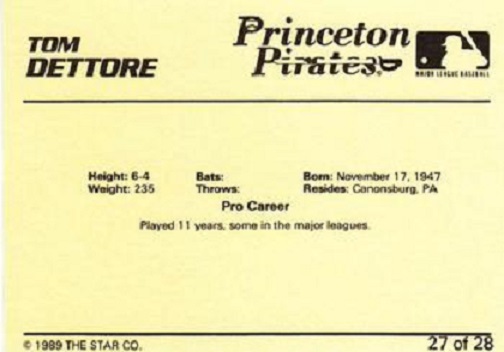 I’m going to apologize for the back because the best scan I could find without a large watermark in the middle was this one that was very small. I enlarged it to a point where it didn’t get too difficult to read, but there really isn’t much to read anyway.

First off, I like the logo for the Princeton Pirates, with the baseball in the first P, and the sword going through the team name. I’m sure the logo budget was in the double figures in dollars at that time, so it’s a nice showing. The back here lists Dettore’s height and weight for some reason, as if you need that for a pitching coach, but they left off the bats/throws part, even though the section is there for it. He was actually a rare pitcher who threw right-handed and batted left-handed. As you can see (or maybe not), the “born” spot confirms that he turns 74 years old today. I also mentioned up top that he was a local boy when he signed with the Pirates, born in Canonsburg, Pa. He also went to three schools between high school and college in the Pittsburgh area.

I also alluded to the note on the back about his playing career. The only bio note that they bothered putting for him is that he “Played 11 years, some in the major leagues.” That’s really lazy work Star, especially since it’s wrong. He played ten years. He spent the 1973-76 seasons in the majors, first with the Pirates, who then traded him to the Chicago Cubs before the 1974 season.

This card is tough to get alone, and as with all minor league cards, you’ll overpay when you buy them separately. A group of sellers on Ebay figured out that minor league cards are so rare that individual players who didn’t make the majors can actually sell for more than the team set itself to people who don’t know better. They just want a card of the person they know and they don’t do the research. This Dettore card is an example of that practice, with a solo one listed for slightly more than the team set, which has a 3.99 + 3.59/shipping price from the only Ebay seller who has it up now, though they have a best offer option, so you can get it a little cheaper. I mentioned above that there is more about Willie Greene and it has to do with this set. It seems that he wasn’t with the team on picture day, despite spending more than half of the season with the team, so he’s not in the set. Dettore is actually the best card in the set, but it’s still a nice little Pirates set that can be had fairly cheap. If you just want his card, there are two choices. One qualifies as “just get the team set” with an $8.98 price due to high shipping. The other is for sale for $2.94, which isn’t bad for a delivered price.