Today’s Card of the Day article features a player long overdue to appear here. Dale Long wasn’t with the Pittsburgh Pirates for a lengthy time (I just avoided using long due to his last name), but he made his mark on Pirates and baseball history when he homered in eight straight games during the 1956 season. However, by the time most people were getting his 1957 Topps card, he was already with the Chicago Cubs, getting traded there on May 1, 1957. Today is the anniversary of the first time that the Pirates acquired Long. They picked him up in the 1950 Rule 5 draft from the New York Yankees system on November 16, 1950. His first stint with the Pirates was brief, lasting until June 1, 1951 before he was lost on waivers to the St Louis Browns. He came back later that year when the Pirates purchased his contract, but he didn’t appear in the majors again until 1955.

Long received mild MVP support during his only two full seasons in Pittsburgh (1955-56), so it’s a bit surprising that they traded him when they did. It would end up fine for the Pirates, as they were just three years away from a World Series title. That wasn’t due to this trade though, as in their two-for-two swap with the Cubs, they ended up giving up the two best players in the deal. Here’s a look at the last Topps card for Dale Long during his second stint with the Pirates. 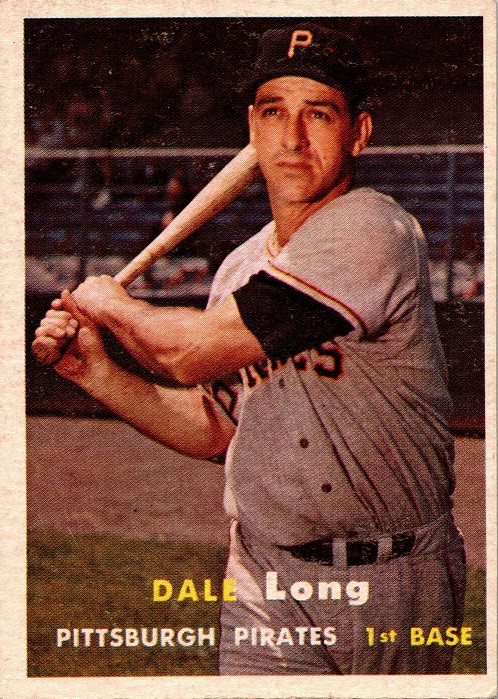 In 1955, Topps put out cards with a horizontal layout, which featured artwork that had both a portrait and action design of each player. In 1956, they improved on that design with one of their bests sets ever, changing the plain background to a baseball scene. I guess they didn’t know how to top that set, so they decided to change everything up. The 1957 set went with the standard vertical photo layout and instead of artwork based off of photos, they used real photos. They also went very simple with the design. It’s a big photo, small/plain white border around the photo, and they put the player name/team/position right on the photo, using a two-color design. The reason it works so well is that you were getting big color photos of each player for the first time from Topps. The other major change for this year is that it’s the first time that the cards measured 2-1/2” by 3-1/2″, which is your standard card size now. The previous cards were slightly bigger. 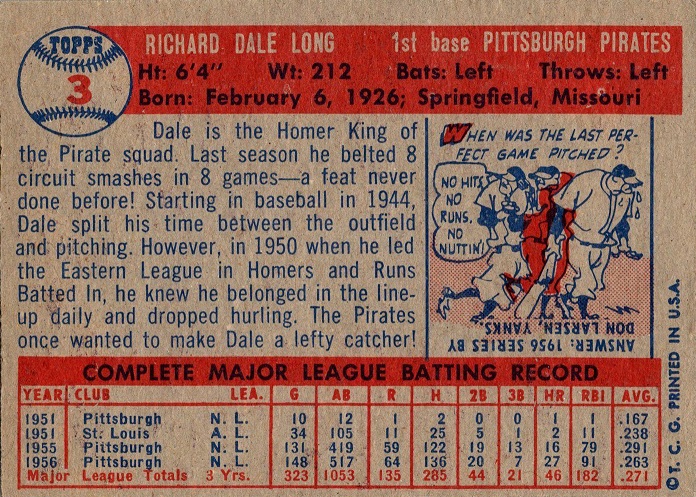 The back of the card tells you right away the reason Long is still so well known to this day, despite what was overall just a decent ten-year career. There are plenty of similar players to him who have fallen into obscurity because they didn’t have a highlight worthy of bringing up any time someone approaches (or ties) his record. Long also has a second reason that he name gets mentioned. He caught two games in the majors. Usually that isn’t noteworthy, but he was a left-handed thrower, and that makes it very rare. In fact, only two lefties have caught in the majors since Long, and one should be familiar to Pirates fans because it happened with the team when Benny Distefano caught three times in 1989. This card even mentions that the Pirates wanted to make him a catcher and they did for a bit, but he didn’t catch in the majors until after he left Pittsburgh. His other catching experience was limited to Spring Training and some side work.

This card is a common from the 1957 set because it was part of the first series. A good rule of thumb that is correct most of the time is that the higher number cards in the early Topps sets have added value and are harder to find. It’s not always true, but it’s a bet you will win often. Being card #3 in the set means that it was part of the first series. Since this set is extremely popular, it keeps the prices of common cards down because there’s always a large supply on Ebay. This card has sold 26 times in the last three months on Ebay. There are 129 current auctions for this card up (as of this writing) and they range from as low as $3 to three of them selling for $100+, two in great shape and one that is autographed. You’re going to want to look in the $8-$10 range if you just want a nice looking copy. A PSA 5 can be had for $22 delivered, and a PSA 7 is going for $45 delivered.