It’s too bad that the 1977 TCMA set called “The War Years” isn’t more popular, because it’s a great idea and a great set. It highlights players who gave up part of their Major League Baseball careers to serve in the war. It was a 90-card set released in two series of 45 cards, with the first half coming out in 1977 and the second half getting released in 1980. This set gave us great photos of some players who didn’t make it into other sets because their career came during a time when not many baseball card sets were being produced. Pittsburgh Pirates outfielder Maurice Van Robays has a few other cards in his catalog, but you don’t have many choices for cards/memorabilia if you want him pictured with the Pirates. Here’s a look at card #71 from the 1977 TCMA The War Years set, featuring Maurice Van Robays. 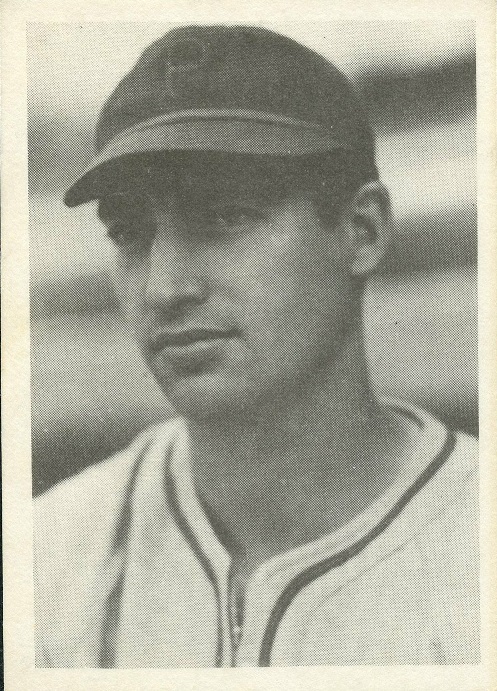 These cards are standard size baseball cards, the same as 1977/1980 Topps cards. They are real photos, so obviously all of them are in black and white. Van Robays played all six seasons of his big league career in the majors with the Pirates. He debuted in 1939, stayed around through 1943, then returned from the war and played in 1946.

This photo appears to be from 1940. I say that based on the one-year hat they wore that year at home that had a red letter on a dark blue hat, with a red band going across the hat just under the “P”. I guessed 1940 because the letter P looks darker. If it was the road hat from 1940 or 1941 (the only other option due to that band) the letter P in this photo would actually be yellow in real life.  I found a photo originally labeled 1940 with the road hat and the yellow on that cap is noticeably lighter. The 1941 home hat had a bright red bill, and that doesn’t look like a different color in the photo from the top of the cap. I could be wrong, but you at least know why I made that guess. Either way, it’s a 1940-41 photo taken at Forbes Field, which is a good enough estimate. 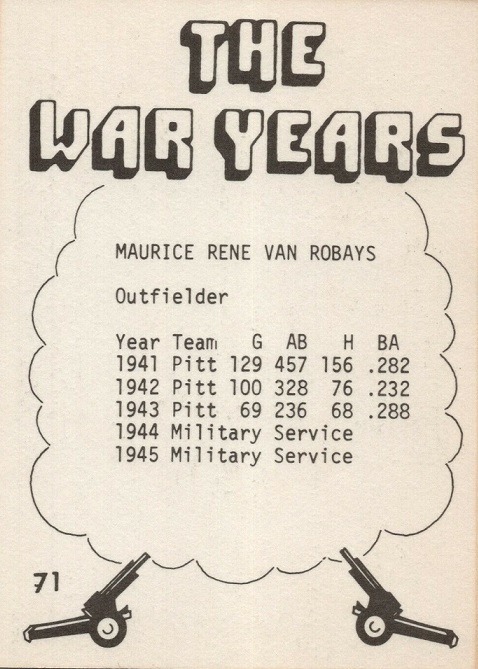 The backs here are a bit odd. I didn’t expect to see stats inside clouds made by cannons going off, but here we are. They also went very light on the stats, going with just games, at-bats, hits and batting average. That’s a pretty odd combo considering that those last three stats are basically just the equation to figure out the average. You only need two of them to know the third, doesn’t matter which two you have available. If I was going with just four stats on a 1977 card (showcasing the 1940’s), I’d probably go with games, runs, RBI and average. Obviously they would include any modern stats, so you have a somewhat limited number of stats to work with under those circumstances. Home runs might sound like a better choice, but there weren’t a lot of big home run hitters back then, which is why they didn’t strike out a lot back then either and games took two hours to play, but I digress.

As you will notice on the back, Van Robays gave up two years to service in the war. It looks like he also gave up part of the 1943 season, but he was actually sent to the minors on May 1st and didn’t return until July. He played a total of 153 games that season. He was back for the start of the 1946 season, so that 1944-45 stretch is all he missed. He struggled when he came back and didn’t play in the majors after the 1946 season, so it’s possible that the missed time actually cost him more than just two full years, but that’s hard to quantify. Maybe his skills were diminishing anyway and it didn’t change the inevitable, but we at least know that he service cost him time and that’s what makes this set special, because it celebrates those players who did the same thing.

There aren’t a lot of options if you’re interested in buying this card. In fact, if you want one, go to Ebay right now and buy it, just stop reading. If you’re still here, I hurried the others off because there are only two available right now and both of them are under $3 delivered (though I believe sales tax would put one of them just over $3). One person has an almost complete set with Van Robays in it, but the price is extremely high. For reference, someone sold a lot of 128 cards (80 of the 90 cards in the set, plus 48 duplicates) for $31.50 delivered.