One of the eight former Pittsburgh Pirates born on this date (November 14th) is outfielder Xavier Nady, who played for the 2006-08 Pirates. He’s somewhere celebrating his 43rd birthday today, unaware that he’s a subject of a Card of the Day article. This is the first time that Nady has made it into this feature. That’s not a complete surprise because his overall time with the Pirates wasn’t long. He joined the team in a mid-season trade in 2006 and he left in a mid-season deal in 2008, so there was just that one full season in Pittsburgh in the middle. He was around during a time with plenty of card choices, so I had a plethora of options for today’s article.

I just recently mentioned that I stray towards Topps Heritage cards for more recent players that I highlight here. That’s because I really like those sets and the throwback designs. I made sure today to avoid the Topps Heritage line for Nady, even though we had some choices available from those sets. I want to make the articles about the cards and the players, so it’s always good to try something new. That’s why I totally switched things up today and picked his 2006 Bowman Heritage card. It’s based off of the 1949 Bowman set, but I went one step more and used a Pieces of Greatness card. So here’s a look at Xavier Nady’s 2006 Bowman Pieces of Greatness card. 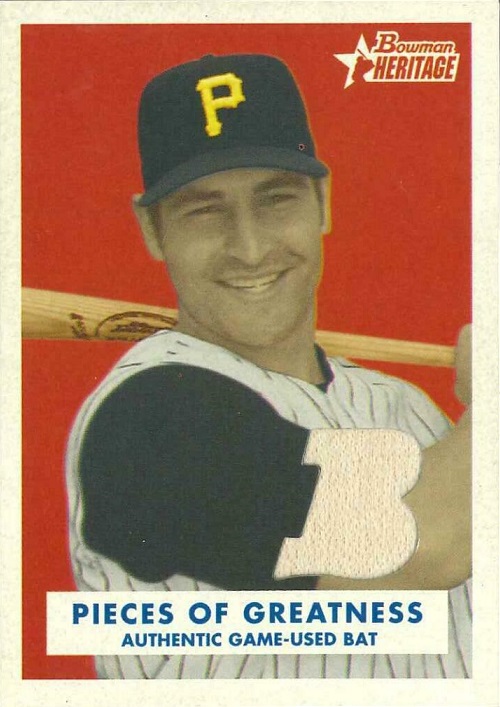 The 1949 Bowman set used a solid one-color background and a faded photo of players. It’s not one of my favorite looking sets, but it has some great cards, like the Satchel Paige and Jackie Robinson cards, which are very popular with collectors. They also included nicknames on the front of the cards, which was a nice touch. This Nady card has the look of the 1949 Bowman, as you can see with the all-red background and his faded photo, but this is no ordinary base card from the set. They included a sliver of a game used bat, shaped it like the Bowman “B” and attached it to the front of the card. In the bottom where his name would have been on the original card, the box instead says “Pieces of Greatness” and lets you know that it’s an authentic game-used bat. If you’ll notice, the front doesn’t have anything you normally see on cards now, no position, logo, team name or player name. It’s all about the bat piece. 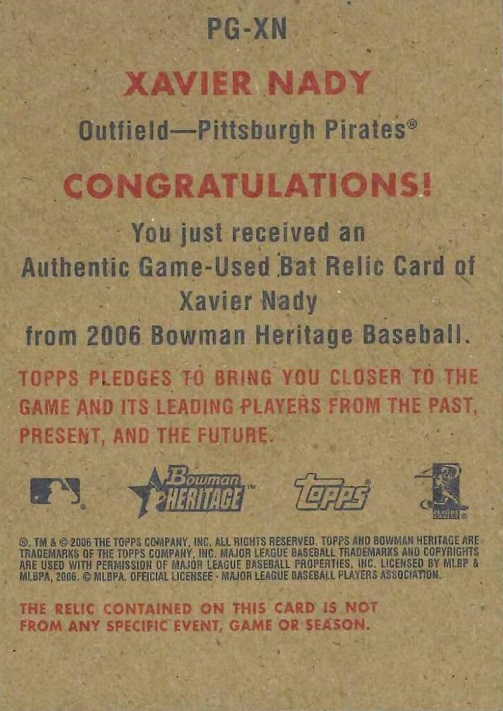 The throwback design tribute continues on the back, but they really missed the mark here. The original cards would have a bio section, but this card continues to be all about the bat piece. There’s almost nothing here about Nady, other than you get the team name and position on the back. If you didn’t know already, Topps put out Bowman cards, so this is really a Topps Heritage card anyway, just issued under the Bowman name. I like the note at the bottom telling you that the bat isn’t from anything specific. You just know that he used the bat in a game and that’s it.

Are you interested in owning one of these cards? This particular scan came from a card that is listed for just $3.52 delivered. I bet you didn’t expect it to be that low, but there are others for a similar price so you don’t need to worry if someone beats you to that one. There’s another one on Ebay for $15.79, three more that are $7-$8 each, and three for under $4 delivered. Obviously the lower priced ones are recommended because as the back says, there’s no specific event attached.