This series has been going on for too long not to have featured a card yet from the 1952 Bowman set. That travesty ends here today with card #138 in the set, Pittsburgh Pirates pitcher Ted Wilks. I’ll be sure to feature another card from the set here sometime in the near future when I get a chance because there are some great looking cards in the team set, and they have some firepower, with Ralph Kiner, Vern Law and Bob Friend in the set, along with a few interesting poses. I picked this card of Ted Wilks, pitcher for the 1951-52 Pirates, because of the card image, which I thought was great, until I learned at today years old that the background wasn’t what I thought it was this whole time.

Wilks was born on this date in 1915 and his big league baseball story has a great beginning. He debuted in the majors at 28 years old in 1944 and posted a 17-4 record, while helping the St Louis Cardinals to a World Series title (okay, that part isn’t that great). His career fizzled a bit compared to that wild start, but that’s a great way to show them that they misjudged your talent when you were toiling in the upper level of the minors for the last six seasons. His time with the Pirates wasn’t as exciting, and he didn’t put in a full season with the team, joining them in June of 1951 in a trade, then leaving in August of 1952 in another deal. Here’s a look at one of the few cards available for him with the Pirates. 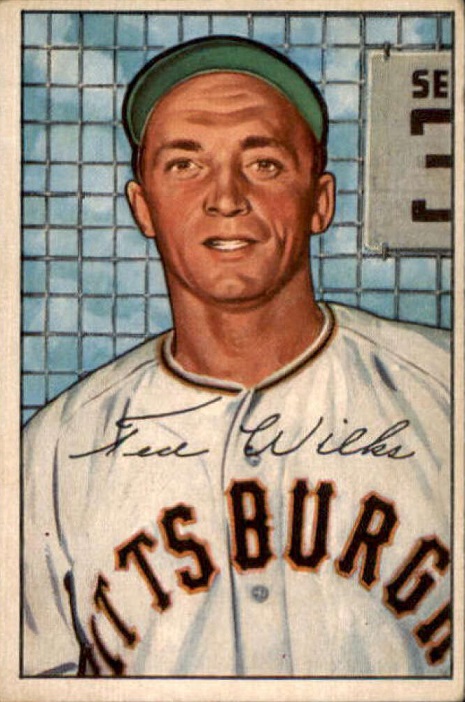 For the longest time I thought that this has to be one of the most interesting backgrounds ever on a card, then literally as I’m writing this I finally figured out what was behind Wilks. I thought that was tile this whole time, like the little ones you see in bathrooms, and he was in some hallway in a stadium. Now that I see a full-size scan bigger than the actual size of the card, I see that it’s netting behind him and that sky blue tile color is literally sky blue. Now it’s just a normal baseball scene, telling you that he took this photo by section three (or a number in the 30’s/300’s). That’s kind of disappointing…I was going to talk about the uniform, and the artwork and the facsimile autograph and the unoriginal design that works here, but let’s just move on to the back. 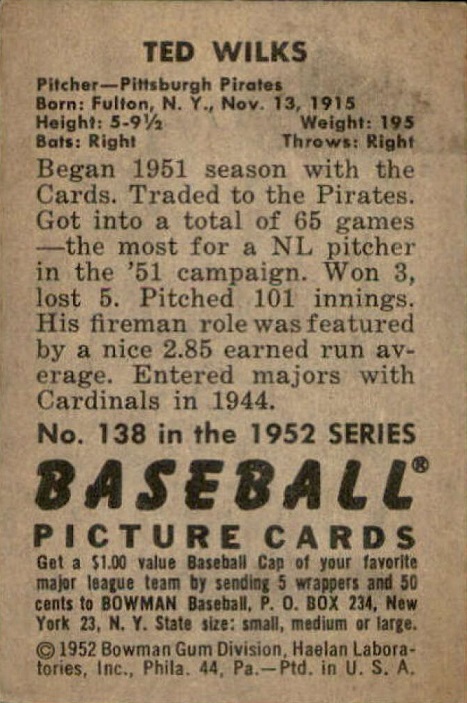 The back has a mini bio section for Wilks, along with a big ad telling you that for five Bowman wrappers and 50 cents, you can send away for a hat of a big league team that costs $1. That’s not much of a deal, though I would probably get a Pirates hat now if I could get it for 50 cents and five 2021 Bowman wrappers.

Here’s an interesting fact about the 1952 wrappers. If you were around back then and saved those five wrappers in nice shape, they would be worth $1,500+ right now total. Yup, there’s a collector market for wrappers too. That hat better have been worth it.

Here’s an interesting fact about Wilks. That 1951 season mentioned above was the only season he had a losing record in ten years in the majors. He finished with a 59-30 record. His 2.83 ERA that year for the Pirates was easily the best mark on the team. The second best among regular pitchers was Murry Dickson, who somehow won 20 games for a team that finished 64-90. His ERA that year was 4.02, more than a full run higher than Wilks.

This card is plentiful on Ebay and you have your choices of grades, with nothing bank-breaking among the options. The most expensive card listed right now is $49 and it’s in really nice shape, but that’s a high price. There’s one graded a BVG 5 (Beckett Vintage Grading) and it’s $40. However, there’s an SGC 80 (equal to PSA 6), which is $22 delivered. A PSA 6 sold recently for $24, so that appears to be a good price. You have nearly 50 more options ranging all the way down to a few that are right around $5 delivered.