The Pittsburgh Pirates acquired catcher Francisco Cervelli from the New York Yankees on this date in 2014. He played five years in Pittsburgh, battling through nine trips to the disabled list to play 450 games during that time. He was a fan favorite in Pittsburgh, so we celebrate the anniversary of his arrival to the Pirates with his first Card of the Day series appearance.

I’ll admit that I have a weakness when it comes to picking out newer cards, especially when it’s a first-time player and we have all of his cards to choose from for the article. I tend to go for throwback designs and I end up with the Topps Heritage set often. I (sort of) tried to avoid that here today by passing on my first choice, but then while scrolling through more cards, the 2017 Heritage card of Cervelli caught my eye. They used a throwback to the 1968 Topps design, which I really like, so I had to go for it.

One thing with Heritage cards is that even the set designs I don’t particularly care for from the original years, look great on the newer cards, with the glossy look and more vibrant colors. I almost used the Cervelli Heritage card with the 1967 Topps design for this article. That year is probably my least favorite design from the 1960s Topps sets, but it looked good on a 2016 card. Anyone else feel that way? Anyway, let’s look at today’s card, which was #13 in the set, featuring Pirates catcher Francisco Cervelli 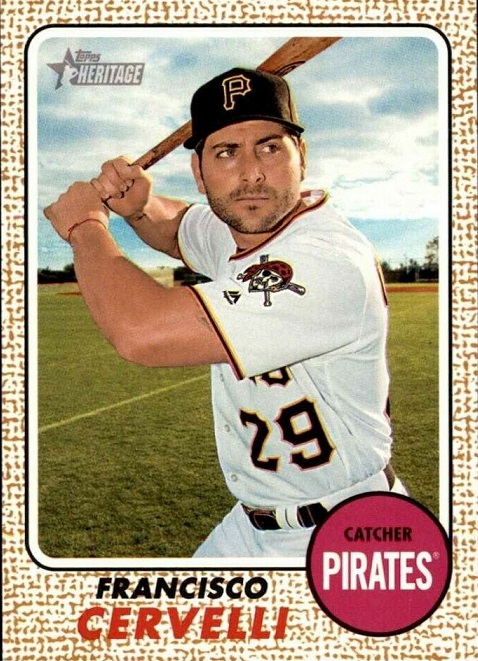 One thing I like here is that this card has the old-style feel to it with the staged action photo on the sidelines, with the player looking off to the side. That describes about 90% of the cards from the 1968 set, so I like that they used it here for Cervelli. I also like that they got a good shot of the sleeve logo, because the team logo doesn’t appear on the 2017 Heritage cards.

I said that I’m a fan of the 1968 Topps set, but that’s in more of a general term, because they could have done a little better with the Pirates colors. If you notice where they have the position/team name, they used that dark pink/white team lettering for all of the Pirates, but not every team had that combo. I always like when they use team colors in the card design, which is one reason why I really like the 1981 Topps set. However, if the colors they use are still eye-catching, then I’m okay with it too. The moon does not hit my eye with the 1968 Pirates, but I still like them more than some years from that era because of the border design. 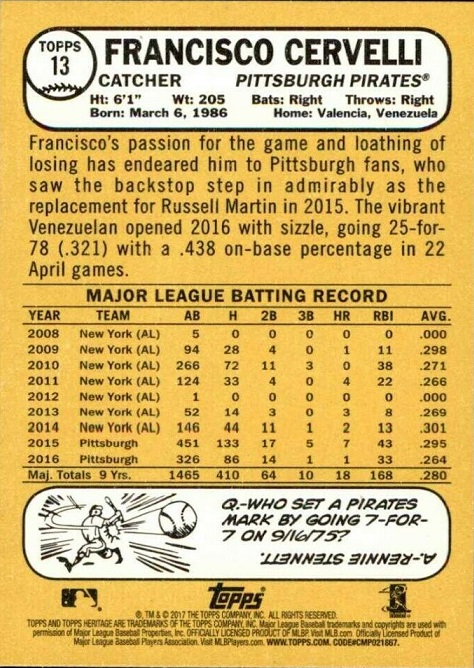 I used the word vibrant above and thought about it for a minute or so because I rarely use that word to describe cards or anything else. Then I see that Topps threw vibrant in the description of Cervelli on the back of the card.  I think Cervelli was in the majors just long enough at this point for Topps to decide to leave off his minor league stats and go with a bio section instead. If you didn’t know already, the back is also a throwback to the 1968 design. If you didn’t know the answer to that trivia question, then your homework is to go to the main page on the history site here and start reading until you’re done.

You are interested in this card, I can tell just by how you looked at the front/back. So here’s what you do. Go to Ebay and search “Cervelli 2017 Heritage”, and then pick out the lowest priced card. There are many options under $2 delivered and 37 total auctions for this card. There are a few variations in this set, including a blue border card that is one of 50 available, and that’s going for $10/plus shipping. There’s also a jumbo card that is only numbered to ten copies and that’s going for $7. Whatever you pick, happy collecting.