Yesterday’s Pittsburgh Pirates History article looked at the time the Pirates traded away pitcher Pink Hawley in a seven-player deal with the Cincinnati Reds. Hawley is one of three pitchers in franchise history to win 30+ games in a season, which got me thinking about this particular game covered below. I actually didn’t know the specific game when I set out to write about it, but I knew what happened in this game before I found it. I’m ruining the ending at the beginning by telling you that the Pirates won this game and it has historic meaning. I’ll also say that Hawley didn’t play in this game, but he’s the reason I wanted to write about it.

The Pirates were in Philadelphia on Thursday September 3, 1896 to take on the Philadelphia Phillies. The Pirates had a 60-50 record, which was only good enough for sixth place in the 12-team National League. The Phillies were one spot behind them, though they had a 54-58 record. The Phillies lineup has some all-time firepower, with Hall of Famers Sam Thompson, Ed Delahanty and Nap Lajoie all playing. Those first two were well into their careers and they were established stars, while Lajoie debuted just three weeks earlier.

The Pirates couldn’t match those names, but then again not too many teams in baseball history could do that. However, the Pirates had one of their most under-appreciated outfields at this time, with Patsy Donovan, Elmer Smith and Jake Stenzel. Donovan and Smith were perennial .300 hitters with speed, while Stenzel holds the team record for highest career batting average and OBP. Stenzel and Donovan hold the Pirates 1-2 spots for the most runs scored in a season. Smith was also part of that Hawley trade with the Reds that I mentioned above.

While the lineups looked like an advantage for the Phillies, who also had the criminally underrated Lave Cross on the their team, the pitching match-up favored the Pirates. The Phillies were throwing out Kid Carsey, who was having his worst season to that point, though he was basically ineffective the rest of his career when compared to his peak years (1892-95). The Pirates had Frank Killen, who was a 30-game winner in 1893, the second 30-game winner in franchise history after Ed Morris and before Hawley made it a trio.

There’s no full play-by-play of this game, but there are plenty of in depth recaps from Philadelphia sources (which the Pittsburgh papers used), so I’ll do my best to piece it together. The Pirates won the series opener the previous day by a 10-2 score.

The umpire may have been the most interesting part of this game if not for the historical note attached. On July 31st, Bud Lally was the umpire for the Pirates/Cincinnati Reds game and Frank Killen was pitching. Lally made a call on a foul ball that Killen believed was wrong. Killen threw up his hands, which Lally thought was a sign of aggression and he punched Killen, who then fought back and got arrested for what was called assault. Lally, who was umpiring for just his seventh game in the majors, later admitted that he made a bad call. Killen was fined $25 for his part in the scrum. This wasn’t there first game together since the scrum, but Lally would end up ejecting a player in this game as well on a controversial call.

One of the recaps from this game said that it was dark and cloudy during the game and fly balls were an adventure for the infielders. It should be noted that during this time baseballs were kept in play longer, so it was probably harder to track a discolored baseball under those conditions.

The Pirates were credited with three hits in the first inning, but they failed to score a run. The Phillies went without a hit in the first, then neither club recorded a hit in the second. The Phillies were the first team to score in this game, tallying a run in the top of the third on a single by lead-off hitter Duff Cooley (a future Pirates player at the time), who then stole second base and scored on a single by Sam Thompson. I’ll point out that the Phillies were batting in the top of the inning at home, which was a common practice during that time for the home team.

The Pirates got a run in the third inning on an error by Cooley, who dropped a fly ball. Jake Stenzel had reached base on a force out and he stole second, before scoring on the error.

Both teams had one hit and no runs in the fourth, then the Pirates took a 2-1 lead in the fifth. They got two men on when Bones Ely reached on a dropped ball by Thompson, then Stenzel reached on a bunt hit. That was followed by a sacrifice hit from Elmer Smith that put both runners into scoring position, then Ely scored on a foul ball down the left field line by Denny Lyons.

After the Phillies went down in the top of the sixth without a hit, the Pirates broke this game open with a little help in the bottom of the inning. The scoring started with a one-out solo homer by Killen, which was the tenth home run of his career (he finished with 11). That was followed by a triple from Dick Padden, who was hitting ninth in the lineup. Patsy Donovan singled past the shortstop to make it 4-1. After the second out, Stenzel drew a walk (one paper said it was a hit-by-pitch), and a passed ball put both runners in scoring position. A fly ball by Smith to Cooley that should have been the third out was dropped, making it a 6-1 game, as Donovan and Stenzel scored. Denny Lyons singled to score Smith and make it 7-1. Cooley was responsible for four of those seven runs being unearned.

The Phillies went to rookie pitcher Harry Keener in the seventh and he did well over the final two innings, allowing just one run, though it wasn’t really his fault according to the home reports. Keener started off by walking Harry Davis and Killen. After recording an out, Donovan grounded out, which resulted in an out at second base and an odd play ensued. Davis went to third base on the grounder, then continued home when he saw shortstop Dan Leahy holding the ball. Leahy threw home and it appeared that Davis was out, but umpire Lally called him safe, which resulted in the ejection of catcher Mike Grady, who argued the call. As a side note, that little mental lapse was one of the last things Leahy did in the majors. He debuted the previous day and this was his last game, though he had a highlight before he left.

In the eighth inning, the Phillies rallied to make this 8-1 contest a game. Sam Thompson singled to start the rally, then scored on a triple by Ed Delahanty, who would in turn score on a wild pitch. The Phillies then got doubles from Nap Lajoie, Jack Boyle (who replaced Grady after the ejection) and Dan Leahy. The final out was made on a grounder by Keener. You obviously wouldn’t see a relief pitcher batting for himself in a big spot now, but teams had limited rosters back then and they were already down two players.

That was the end of the scoring and each time managed one hit in their final turns at bat. One of the highlights of the game was Elmer Smith robbing Lajoie of a triple in deep left center with a fine running catch, though I was unable to find out which inning this occurred. The game took two hours to play.

The win here gave Killen a 30-13 record on the season, giving the Pirates their final 30-win season by a pitcher in franchise history. He led the National League in wins that year, but he ended up going 0-5 in his final five starts of the year, so this was his last win of the season. He had quite an odd split after this game, almost as if that eighth inning barrage was a sign of things to come. Killen’s win left him with an 85-48 record with the Pirates in four seasons. He remained with the club until 1898, going 27-39 the rest of the way in Pittsburgh. 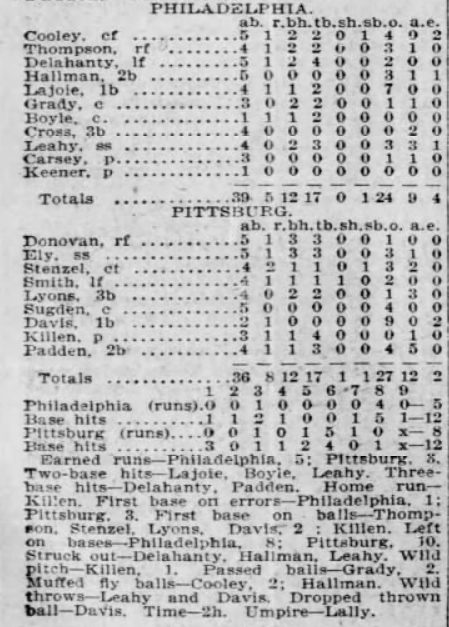