Today’s Pittsburgh Pirates Card of the Day comes from a former top prospect, J.R. House, who appeared briefly for the 2003-04 Pirates. He was a fifth round draft pick out of high school in 1999, who was ranked as high as 21st overall among all prospects in baseball going into the 2001 season. This particular card came out during that time, while he was playing in Double-A Altoona, where he put up a .722 OPS in 112 games at 21 years old. House’s career was sidetracked by injuries that limited him to 76 games total during the 2002-03 seasons, then rotator cuff surgery led to him stepping away from baseball for the 2005 season. He eventually came back and played parts of three seasons (2006-08) in the majors with the Houston Astros and Baltimore Orioles, but those numerous significant injuries did a number of his upside.

House peaked at the right time to be included in some great looking sets. This design in particular is one of my favorites. Topps Heritage uses throwback designs for their cards and they chose to go with the iconic 1952 Topps design in 2001. Here’s a look at the card for J.R. House from that set, which was a short-printed card, which has made it a valuable card in the set. 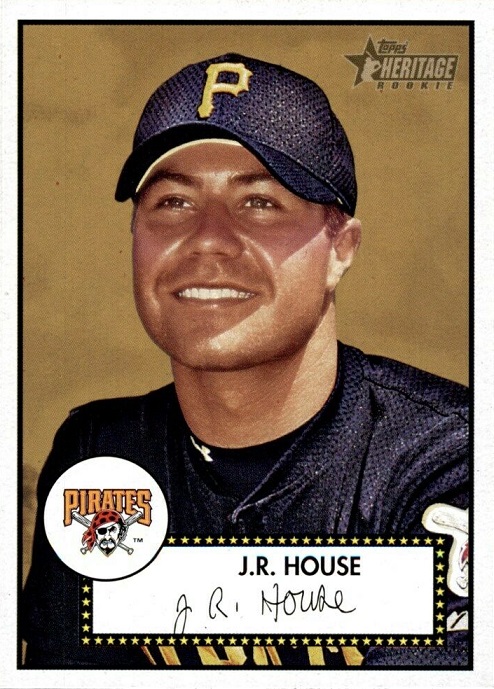 If you’ve collected old cards before, there’s no mistaken the 1952 Topps set design. It’s the set that changed the baseball card game. It was the first major set from Topps, starting a tradition that still goes on to this day. It also has the Mickey Mantle “rookie” that is one of the most collectible cards all-time. Mantle had a 1951 Bowman card, but the 1952 Topps gets the attention and is usually referred to as a rookie card for him.

The 1952 Topps design included the player’s name in a box at the bottom surrounded by stars, along with a facsimile autograph. There’s an interesting side note to House and his autograph. His signature really varies from card-to-card, with some looking like the one above, others sort of looking like they say JR House if you squint hard enough, and some autographs just looking like he wrote it with his feet during a game. I don’t know if it changed over the years or he just rushed it sometimes, but if you ever get one of his autographs, make sure it comes with some type of guarantee, or get a card that came from the factory autographed.

I like how Heritage updated the team logos here, using the same idea, but the current logo. One of my favorite things on old cards is seeing that 1952-era Pirates logo. 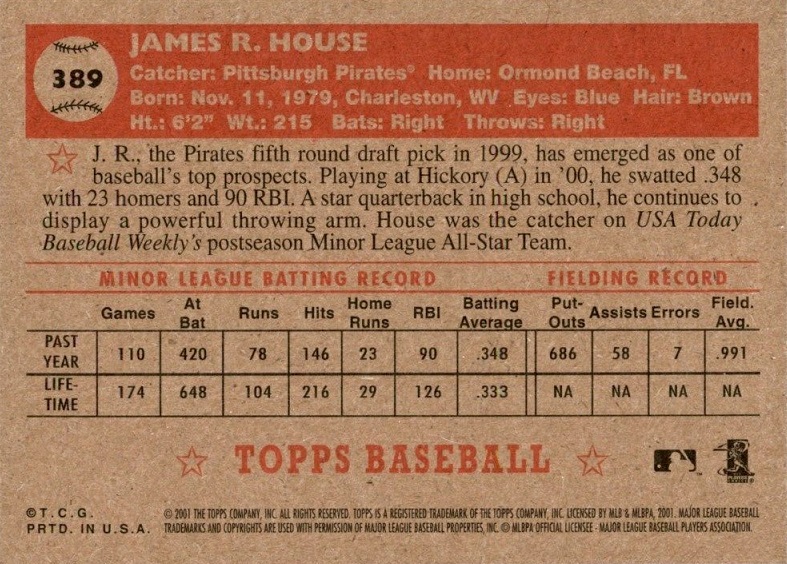 This back design is just like what you would see on the 1952 Topps cards as well, except for the legal stuff and logos at the bottom of course. Back then they had one year of stats and career stats, and during that time they included fielding stats, which Heritage brought back for this series (as long as the original set had fielding stats).

One thing I like to point out with this set and the original is the top part by the name, where they included eye and hair color for each player. I was a bit surprised the first time I saw that on the back of a 1952 Topps card. I never really collected the set, and if I’m not mistaken, I only have two of them. I bought a George Strickland as a Pirates type card from the set, something I’ve done with a lot of sets. I later bought a Monte Irvin card so I had a card of the Hall of Fame outfielder.

There aren’t many choices for this particular card on Ebay, but the price range is ridiculous. One is $4.25, another is $4.79, then the third one is $20.50. Then there’s a tougher to find Chrome version, which is number to 552 copies. That’s actually just as easy to find on Ebay, with three copies going for $18, $19 and $28. The only completed auction in the last three months was for a chrome version and it finished at $7.58.