Today’s Card of the Day selection helps celebrate a man who was a catcher on two Pittsburgh Pirates World Series teams. Johnny Gooch played for the 1921-28 Pirates, seeing time in the 1925 and 1927 World Series. He was born on this date in 1897 and he began his big league career at 23 years old with the Pirates, where he spent the majority of his 11 years in the majors. He was a solid hitter for a catcher and an above average defense player with a strong arm that led to 45% caught stealing during his career. Here’s a look at his 1922 E120 card, which was put out by American Caramel. 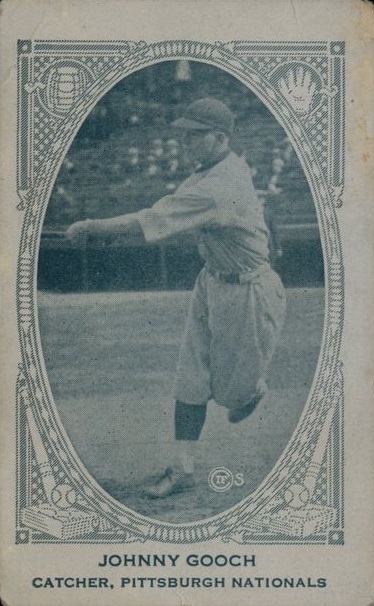 The 1922 E120 is one of my favorites from the era between World Wars. I’m a fan of the ornate design, but there was something even better about the set. They offered some great photos of players in action, which you can see here with Gooch, who appears to be taking batting practice. There aren’t a lot of real photos on cards before this time and the ones you did find mostly had staged action shots or portrait style photos. A lot of sets during this time would use the same photos and different designs on front. This particular photo was also used in a set that was produced in 1927. The E120 name is just a catalog number signifying it was a card in the early 20th century from a candy manufacturer. That name came along long after this set was actually produced. This card was from his first full season in the majors, so he wasn’t well-known at the time, but he established himself as a key role player on those strong Pirates teams during the 1920s. 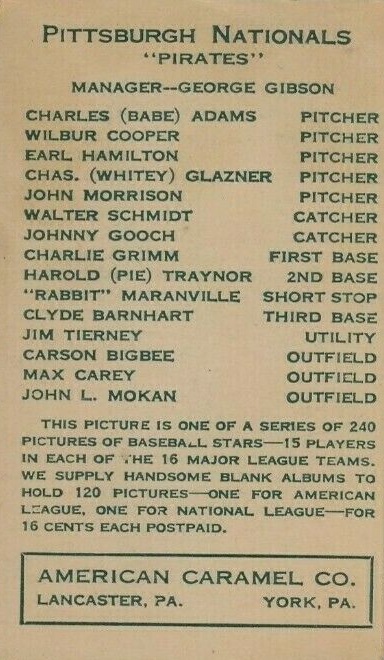 I love these checklist backs on the E120 cards. My favorite part is how they have different ways to present nicknames for the players. Rabbit Maranville is in quotes, while Babe Adams, Whitey Glazner and Pie Traynor are in parenthesis. Then there’s the case of Jim Tierney. I believe I mentioned this here once in a past article, but if you asked me about a former Pirates player named Jim Tierney, I may not remember him right away, even though I’ve written about him numerous times over the years. That’s because he is referred to as Cotton Tierney now in almost all instances. What’s amazing is that searches on newspaper.com for specific words together show that he basically had a 1/3rd split between Jim, James and Cotton. It’s amazing how close the references are for those three choices, almost as if writers decided to use all three and just went in 1-2-3 order over and over. So it’s not as if “Jim” is an odd choice for him, he’s just recognized as Cotton Tierney now and it was used often back then as well.

Another interesting thing to see on the back is the position for Pie Traynor. The 1922 season was his first full season in the majors. He saw brief time with the 1920-21 Pirates. He’s listed as second base here, but he never actually played second base in the majors. He had a little bit of time at shortstop over the years, and even stood at first base for one inning in 1935, but he played about 98% of his time at third base. Clyde Barnhart was the third baseman at the time, but he moved to the outfield so Traynor could take over third. I also like the “Pirates” name in quotes, showing that it was still just considered a nickname back then and not the actual name.

This isn’t a rare card compared to some of the older cards we have featured, but it’s not that easy to find either. PSA has a chart of their (cards graded by them) most recent sales and they have two listed in the last four years. One went for $23 graded PSA 3, and the other was $30 for an authentic one, which probably means it was trimmed and couldn’t get a number grade. There isn’t one for sale right now on Ebay, though if you’re impatient you can get a reprint for $4. I have a feeling that if one came up for sale now in a PSA 3, it would go for around $50-$75, partially because the card market is up right now, but also because there are probably a few set collectors looking for this card and they’ve been waiting for one to come up.