Today’s Card of the Day comes from the 1950 Bowman set, which I was surprised to find out that we have featured here just once in the 20 months that this series has been running. This is the first time that Wally Westlake has been featured in this series, another mild surprise considering how many players we have used with limited repeats (for players, not specific cards). Westlake was a slugging outfielder for the Pittsburgh Pirates for the first five years of his ten-year career in the majors. His 97 homers at the time of his trade to the St Louis Cardinals in 1951 was well up the list of the Pirates all-time home run leaders, mostly due to the fact the team moved into cavernous Forbes Field while the deadball era was still going on. Westlake still ranks 26th all-time in team history in homers, but at the time of the trade, he was third behind Hall of Famers Ralph Kiner and Paul Waner.

Westlake didn’t have many cards issued with the Pirates because his time in Pittsburgh pre-dated the release of Topps full sets and he started just after the war ended, when no cards were being produced. He’ll be in this feature again in the future I’m sure because there are other options, but for now we look at his 1950 Bowman set. Westlake, who lived to 98 years old, was born on this date in 1920, making it a great day to take a look back at one of his Pirates cards. 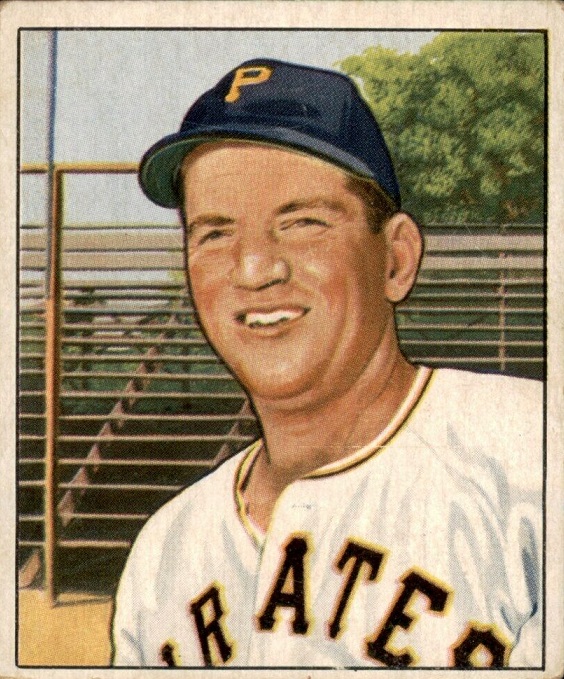 While I usually prefer action poses on cards, even if it’s staged action like the early Topps cards, this particular card has some great artwork behind Westlake. It really gives a great old-time baseball feel to the card. The 1950 Bowman set went absolute no frills on the front of cards. Small white border, thin black line box around the artwork of each player. That’s it, nothing else. It’s as basic as you can get without it just being a full photo on the front. The best part is that it works. Sure a name on the front would be nice, but that’s why they invented backs of cards. 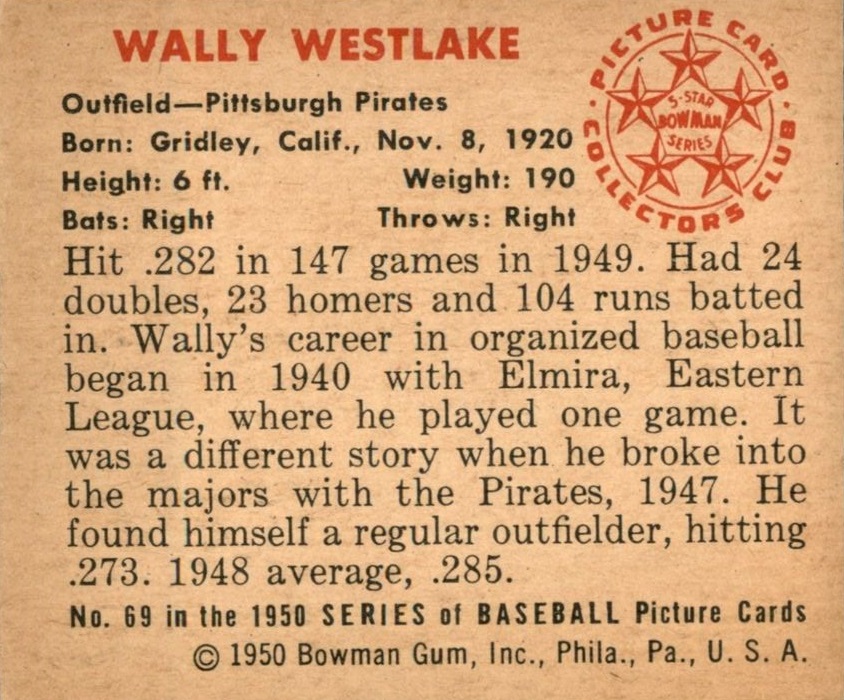 These cards had some interesting bios on the back. The note about the start of his career is true, but a little misleading. He did open up with Elmira, which was an advanced placement for someone his age with no experience, but he spent the next few months with Dayton of the Middle Atlantic League, joining them right before their season opened. That was a Class-C league, two levels lower than Elmira, and a better starting point in the minors. Both teams were farm clubs of the Brooklyn Dodgers. Westlake didn’t make the majors until 26 years old in 1947, but that’s leaving out one important detail. He was serving in the military during WWII during the 1943-45 seasons. He had a solid season in the Pacific Coast League in 1942, one step away from the majors, so it’s likely that he would have made it to the majors sooner if not for the war, possibly as soon as 1943.

If you’re interested in this card, then you’ll be happy to know that supply keeps the prices reasonable on this set. It’s popular with collectors, but also plentiful in 1950’s terms. There are currently 83 examples on Ebay right now, ranging from a high of $200 (with a best offer option) for a PSA 8, down to a small handful of options in the $8-$10 range. I’ll note right away that the $200 price is as misleading as that Elmira note on the card, because you can get it for $99 or $110 in PSA 8 from other sellers. Sometimes you’ll find a nicer looking card within a grade and it will be worth the difference, but that’s more like $110 vs $99, not $99 vs $200. There are a few graded/authenticated signed examples of this card and they won’t break the bank (there’s a nice one for $33). As I mentioned, Westlake lived a long life, passing away in 2019 at 98 years old, so his signature isn’t tough, which gives you a chance to own a signed copy of a great card at a reasonable price.