I was surprised to find out that Pittsburgh Pirates first baseman Dick Stuart (1958-62) hasn’t been featured in our Card of the Day series. Part of that surprise came from the fact that we had one of his cards uploaded on the site already and I figured that was because we used it here in the past for a Card of the Day. Apparently I just grabbed it to use as a picture for an old article. This series in now into its 20th month, and Stuart was a significant player in team history, while playing for a World Series winning team as well. So it seemed impossible that I missed him for this long, but here we are. Since he was born on November 7th, then today is the perfect day for his Card of the Day debut. I figured why stop there though, so today we are also looking at the 1962 Post Cereal set for the first time too. Here’s card #169 from that set, Pirates first baseman Dick Stuart.

Here’s the front of the card (the back is blank cardboard): 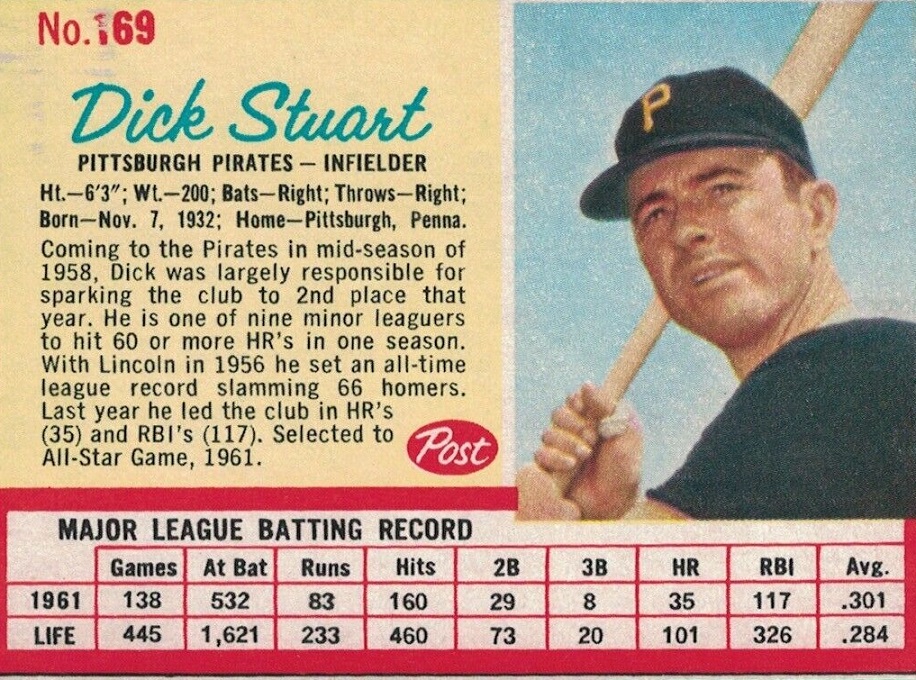 We have used the 1961 Post Cereal set here twice and it’s not really much different from this set, but at the same time they are easy to tell apart. Technically it’s really easy if you look at the year listed in the stats, but there are other more obvious first glance giveaways. Post printed similar baseball sets in 1961, 1962 and 1963. The 1961 and 1963 sets have yellow boxes at the bottom around the stats. The 1962 set has red boxes for the National League players and blue boxes for the American League players. The other two years didn’t differentiate between leagues, at least with that one area. The 1962 set also had a yellow background behind the information for each player. The other two years both had white backgrounds. All three years have the same stats/information/player photo set-up.

The 1962 Post set consisted of 200 cards that measured 2-1/2″ by 3-1/2″, as long as they were cut correctly. People received them on the back of marked Post Cereal boxes. All of the cards were hand-cut and very few whole boxes still exist.

Stuart is famous for two things and only one of them made it to the information section of this card, though that’s not surprising because the second reason isn’t positive. He was a legit power hitter, who belted 228 homers in the majors while playing seven full seasons and three partial years. His big year for homers came in the minors in 1956 when he hit 66 homers for Lincoln of the Western League. That’s a number that has been topped just three times in minor league history. The other thing he was famous for was how bad his defense was at first base. He had three nicknames based on his poor defense. He led the league in errors for each of his first seven seasons in the majors. He finished with -12.8 WAR on defense…that’s bad.

The 1962 Post Cereal cards of Stuart are the hardest to find of the three years. There are more 1963 Post cards than the other two years combined, but there’s also twice as many from 1961 than you can find from 1962. A PSA 2 of this card is currently going for $33 delivered on Ebay. There’s an ungraded copy that is also $33, and another that is $45. If you don’t mind low grade copies, there’s one for just $2.19 delivered that has slight discoloration in all four corners. That’s it for options as of the time of this writing. While none of those three better condition cards are cheap, four examples of this card have ended in the last three months for under $10. So if the low grade one isn’t your cup of tea, then it might be best to wait for a better deal. Happy collecting.