One of the things that Topps did for a few years in the 1980s was include cards for each team in baseball that showed their ERA and batting average leader on the same card. On the back, those cards would have the team checklist. The combo would create some interesting pairs of players on the same card, such as the 1983 card for the Baltimore Orioles featuring Hall of Famers Jim Palmer and Eddie Murray on the same card. One of those interesting examples for Pittsburgh Pirates fans is the 1983 set, which had Bill Madlock and John Candelaria on the same team leaders card, two key players for the 1979 World Series champs. Here’s a look at that card and a quick glance at some of the names on the back who made up the 1983 Topps Pirates team set. 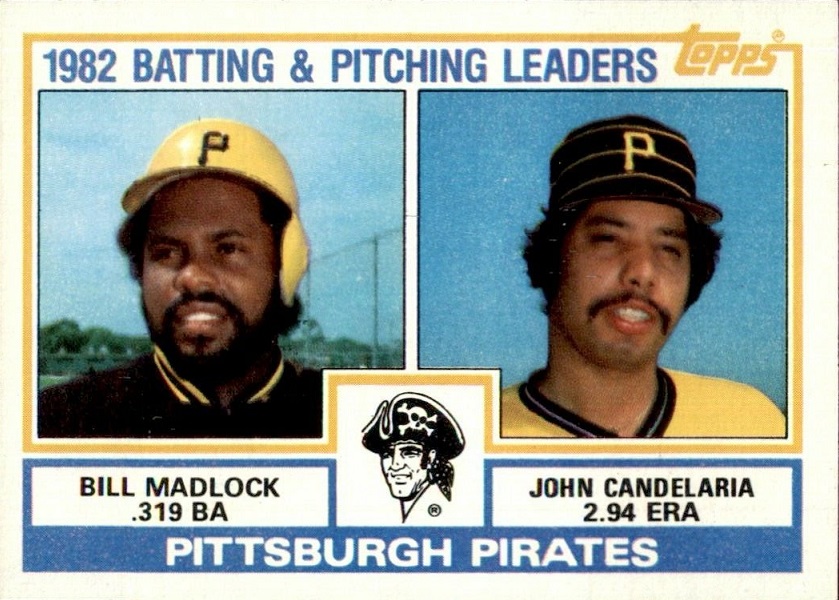 The 1983 Topps set is middle of the pack for me in the decade. I’m a big fan of the 1981 and 1987 design. I don’t like the 1988-89 cards, then there are the other six years somewhere in the middle. Catch me on a good day 1983 Topps, and I’ll rank you fourth behind the 1982 set. That being said, I really like the team leader card here, especially for the Pirates logo right there in the middle. I also appreciate that Topps got photos of Madlock and Candelaria in two totally different uniform combos, a battle of black & gold VS gold & black if you will.

The interesting thing here with Madlock is that he finished second in the league in batting average behind Al Oliver, then on the Montreal Expos. Oliver’s only batting title was the only thing that stopped Madlock from winning three straight batting titles with the Pirates. He won in 1981 and 1983.

Candelaria finished sixth in the league in ERA with his 2.94 mark. It was only the fifth best season ERA of his outstanding career. The ERA leader choice here shows that they had a fairly high minimum to qualify. Kent Tekulve had a 2.87 ERA in 128.2 innings, the fifth most innings on the team, but that wasn’t enough to get him the top spot. 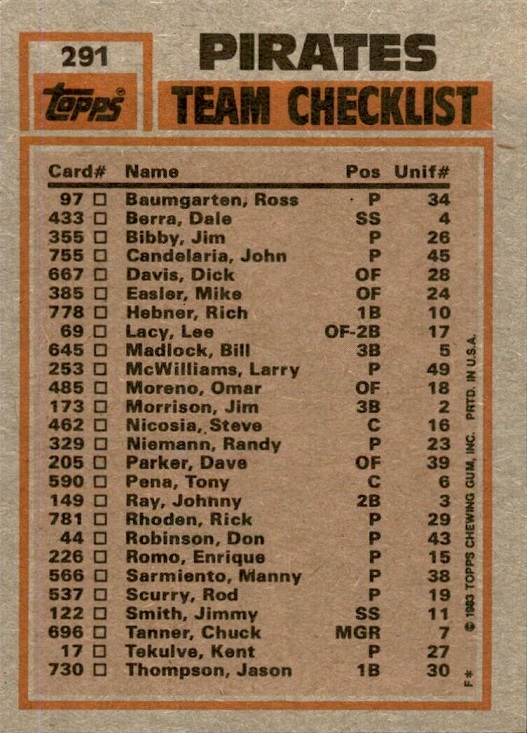 There’s the team checklist with all 26 cards in the team set, minus this card. Most dealers will also include a Super Veteran card of Kent Tekulve, so you get 28 cards total if you buy the set together. There are some great names from the past that bring up good memories for Pirates fans, including 1979 team members Dale Berra, Jim Bibby, Mike Easler, Lee Lacy, Omar Moreno, Steve Nicosia, Dave Parker, Rick Rhoden (one game), Don Robinson, Enrique Romo, Chuck Tanner and the aforementioned Tekulve. Counting our two main subjects, that’s 14 members from that great team out of 26 cards. Then you have Tony Pena, Johnny Ray and Rich Hebner, who were fan favorites, plus Larry McWilliams, Jason Thompson, Rod Scurry and Jim Morrison, who all had nice runs with the Pirates. Fun fact: Scurry was actually with the 1979 Pirates for a month but never got into a game. It’s a really strong group of players for memories from the not-too-distant past.

Then you have a group of players in Ross Baumgarten, Dick Davis, Randy Niemann, Manny Sarmiento and Jimmy Smith, who some people have only heard of because they read our daily history articles. Of that group, Sarmiento would have been the best known if he didn’t get sidetracked by injuries. He actually had a strong run in 1982-83, compiling a 3.25 ERA in 249 innings, then never pitched in the majors again at 27 years old.

If you’re interested in this card, I’m not surprised. It has two key players from the 1979 team on the same card. You’ll be ecstatic to know that it can be had on Ebay for under $2 delivered. Two have sold in the last three months and they went for $1.09 and $2.38 delivered. There are ten active auctions for this card and nothing special in the auctions, so all I’ll say is that you should be careful of checking the shipping charges before hitting that buy-it-now button. A few sellers have crazy shipping costs for a common card.