Someone once thought it was a good idea to include pictures and bios of baseball players on matchbooks and 86 years those items are collectible. Why would you include baseball photos on something that is considered to be garbage once the actual main item is gone? I know they did stuff like that with Hostess cards on boxes in later years, but how about the fact that to use the matches, you had to strike them on the card itself? Oh yeah, there’s also that part about card collecting being enjoyable to many kids and you’re giving them a “card” that helps you set things on fire, mainly items that you smoke. Yeah, I probably should have led with that part, but I don’t smoke, so I was worried more about damaging the collectible item. That leads us to today’s “Card” of the Day, which comes from 1935 and features Pittsburgh Pirates pitcher Ralph Birkofer on a Diamond Matchbook.

Here’s the front of the card (I’m not putting that word in quotes anymore, you get the idea): 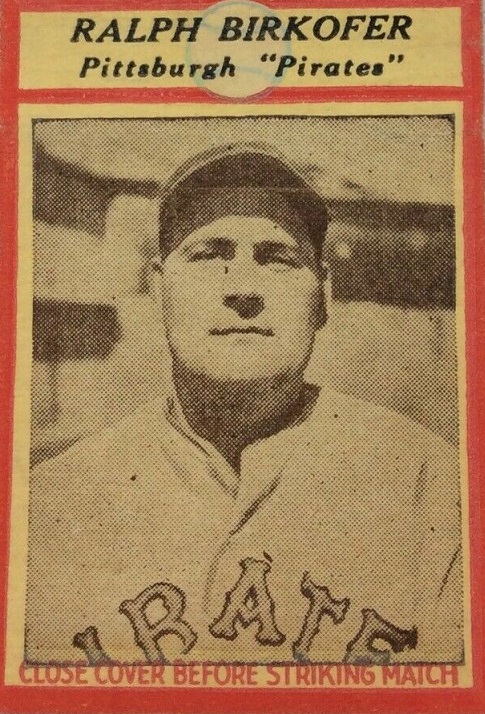 I should be more specific when I say front/back here in that once you open the matchbook you’re seeing the entire card at once. If I included a whole scan though, the side we are calling the back would be upside down. So I split one scan into two pieces and flipped the back part upside down so it’s easier to read. Here’s a nice photo of Birkofer, who joined the Pirates in 1933 and stayed with the team through the end of the 1936 season. He was born on this date in 1908, which is why he’s being featured here today. You can find a few scans online of this Birkofer with green borders, which is just a color variation from this set. There were multiple colors available throughout the set.

Notice on the top where they put the Pirates name in quotes. It’s funny because we often hear the Pirates name being first used by the team in 1891, but that was just the first time that the name was used at all, and it definitely wasn’t popular with the team. It really didn’t catch on until 1895, and even then they completely dropped the name in 1898 when they were the Patriots, only to bring it back the next year. So putting Pirates in quotes back during that time would make sense, but by 1935 it was all most people knew for the team name.

This Diamond Matchbook set is labeled as being 1935-36, which leads to something interesting on the back… 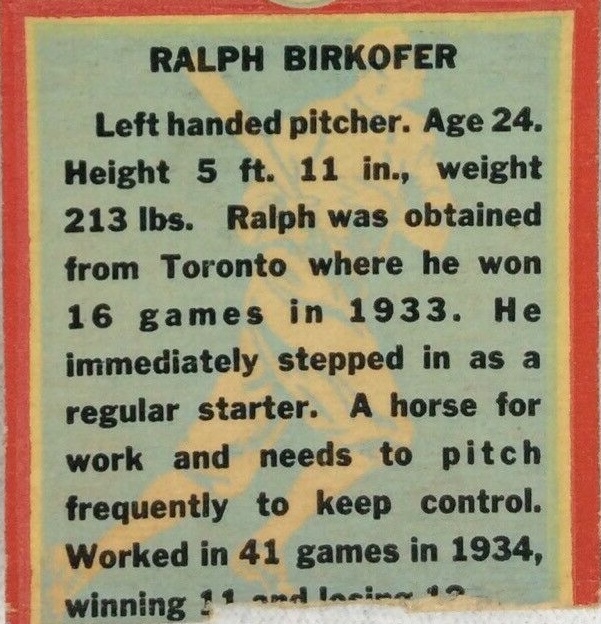 I’ll note here that Birkofer wasn’t obtained from Toronto. He was sent to Toronto on option during the 1933 season, after starting the year with the Pirates. He was recalled in August by the Pirates. I mentioned the year above and it has to do with the writing on the back. There are two Birkofer cards in this set, not including the color variations. This card notes his 1934 stats, with the damage at the bottom (which is extremely common with this set) concealing the part about him having an 11-12 record in 1934. The other variation notes that he has a 24-21 career record, which was his record after the 1935 season. That variation also refers to his 1935 season record. The baseball player backdrop for the bio section on back is a nice little touch.

If you’re interested in this card, there are three of them on Ebay right now. The one in the scan is going for $13.90, which is a solid price for these matchbooks in that condition. The one with the 1935 stats back also had back damage and a slight crease on the front, but the price is $10. Then there is one that is a bit rough on the photo, BUT it has the full (1935) back with the section where you strike the match. That one is going for $18.89.