Today’s Card of the Day article celebrates the best season in the career of Pittsburgh Pirates shortstop Dick Groat, who turns 91 years old today. During the 1960 season, he won the National League batting title and was named Most Valuable Player, while helping the Pirates to their third World Series title, breaking a drought of 35 years without a championship. In the 1975 Topps set, they issued a subset of cards looking back at MVP players over the years. They were celebrating their 25th year printing cards by including pictures of the MVP winners dating back to 1951, showing them on the cards from the year that they won. Each card was a two-player card, with the American League and National League MVPs. For the 1960 MVP card, Groat got matched up with Roger Maris, who won back-to-back MVP awards, starting in 1960 with a big season that was followed by his record breaking home run season in 1961. Today we take a look at the pair of MVPs on their 1975 Topps card. 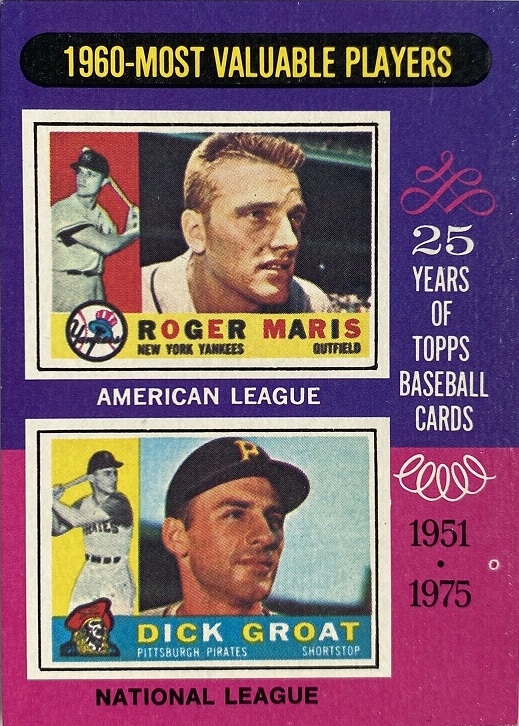 I’m not a big fan of the purple/pink combo for the 1975 set, but I also don’t like a lot of their two-color choices. I’ve mentioned this for other 1975 Topps cards that we have covered here, and I’ll say it again. There are days where I see the set and dislike it and days where I say it isn’t that bad. Right now seems to be a dislike day, though I’d say more of a “what were they thinking” or “they really went with a 70’s theme”. I like the idea they had here with featuring their old cards for the MVPs. Some players actually didn’t have cards for the year that they won the MVP (Roy Campanella in 1955 and Maury Wills in 1962 come to mind), so Topps had to create cards using that year’s design, to use in this subset. 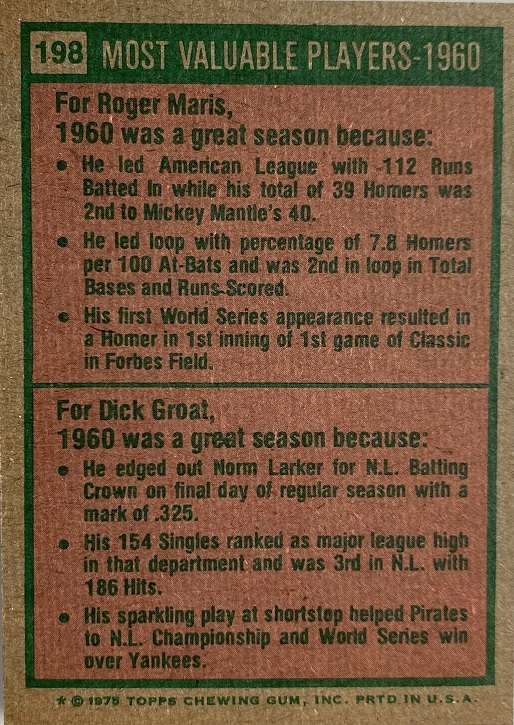 The back of this card tells you why they won the MVP, with the top three reasons why their MVP season was a great season. Groat’s notes talk about his batting title first. He had a two-point lead on Norm Larker going into the final day of the season, and as it turned out, both players ended up right where they were going into the day. Larker went 1-for-3 to finish with a .323 average, while Groat went 1-for-4, ending with his .325 mark. The third point for Groat also made it a great season, and modern metrics agree with that assessment, giving him 2.6 dWAR for the season, which was the best mark in the NL for all positions. The second point for Groat sort of misses the point on an MVP season. Finishing third in the league in hits is fine, but leading the league in singles isn’t usually a category that gets mentioned. They probably could have went with the All-Star selection and/or 85 runs scored.

For the record, Groat finished ninth in the league in WAR, but the definition of MVP has changed over the years. It’s actually a bit amusing that voters have changed the MVP definition to try to give it to the best player, when in the past it usually went to the best player on the best team. It’s sort of like now when people say Hall of Fame voters made a mistake by putting in certain players in the early years. That’s rather critical of the process by saying what they did was a mistake and not the standard for getting into Cooperstown instead. It’s no surprise that Groat won with the ninth place finish in WAR (I’m not overlooking that it wasn’t a stat then) because he was the best player on the best team and that’s usually who got the MVP award.

Groat actually had a higher WAR with the 1963 St Louis Cardinals, but I call his 1960 season better because he won the batting title, which was a huge deal back then, and the MVP, in addition to the championship.

Maris had 39 homers, 112 RBIs, 98 runs scored and 290 total bases in 1960. His season gets overshadowed by being right next to his 61 homer season when you look at his career stats, but it was still a great year for a first place team. In fact, WAR rates his 1960 season better, mostly due to defense, with a 7.5 WAR in 1960 and a 6.9 mark in 1961. Maris was the best player in the AL in 1960 according to WAR, and he only finished fifth in 1961, when his teammate Mickey Mantle put up a 10.4 WAR. Mantle was obviously the best player on the best team that year, but could you actually imagine Maris not winning with his 61-homer season, which was getting unbelievable attention across the country?

This card is worth just a few bucks, but there are two very interesting cards listed from the same seller. One person has two card autographed by both players. Getting a Groat autograph isn’t tough to do, but Maris passed away in 1985, so his autographs are a bit rare. You can grab a PSA 8 of this card for $40 delivered, or if you just want a copy that looks decent, there are a handful of options that are under $3 delivered.

John Dreker
Three former Pittsburgh Pirates born on this date, plus some draft picks from 1984 and a transaction from the 1880s.…