Today’s Card of the Day is a throwback to two different sets from the 19th century. It’s also a bit of a stretch to call a Pittsburgh Alleghenys/Pirates card, but not really. The subject is Jim McCormick, who pitched for the 1887 Alleghenys, the first National League team in Pittsburgh Pirates franchise history. They spent five seasons in the American Association before joining the National League in 1887, and they wanted to add a big pitcher to their staff, which was basically just Hall of Famer Pud Galvin and Ed Morris, who is the franchise’s single season leader in numerous categories, including wins, innings, complete games and strikeouts. Basically, they had a great 1-2 for their staff and they were adding the 30-year-old McCormick, who went 31-11 during the 1886 season for the Chicago White Stockings. What could possibly go wrong?

Well, McCormick went 13-23, 3.60 in his only season in Pittsburgh, where they were rocked by the death of their best hitter (Alex McKinnon) mid-season. The team finished 55-69 and McCormick never pitched again. He actually turned down a three-year deal (albeit at a lesser salary per year), but decided to retire to run a business he owned. He regretted the decision and it ended up costing him his spot in Cooperstown, at least so far. He passed away in 1918, so he personally would have never got the chance to enjoy the honor, but it is still deserved in my opinion. He finished his career with a 265-214, 2.43 record in 4,275.2 innings, completing 328 of his 341 starts. According to modern metrics, he was the best pitcher in his league during three seasons. He was also among the top six pitchers in eight of his ten big league seasons.

I mention all of that in a Card of the Day article to show how great it is that Upper Deck chose to include him in their 2014 Goodwin Champions set 127 years after his final game. He deserves the recognition, and putting him in a modern set gets people to look into the player. So here’s a look at that card: 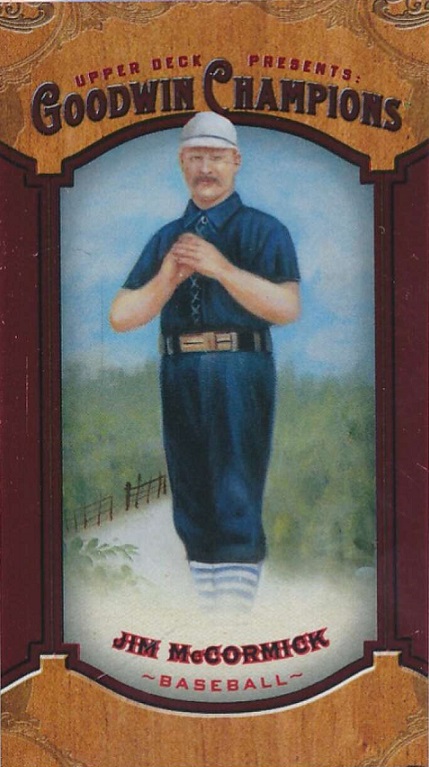 The Goodwin Champions name came from a collection of cards produced in 1888-89. The original cards are both rare and pricey. They included some baseball players, but it also included other sports as well, which is what Upper Deck did with their 2014 set. I mentioned that this is a throwback to two sets though, and that’s because the picture they used here is from the 1886-90 Old Judge set, which used real photos, unlike the Goodwin Champions set, which used artwork. So what you get here is a combo of both sets, the name and art of the Goodwin Champions set, and the photo used in the Old Judge set.

I also mentioned that this is sort of a Pirates/Alleghenys card. That’s because McCormick had ten different cards in the Old Judge and eight of them show him in a Chicago White Stockings uniform (the other two are street clothes photos). However, he joined Pittsburgh shortly after the set was produced, and at least four of those eight cards card be found with the team name changed to Pittsburgh. There are also some variations that just show him with his name/position and no team name. Instead of taking new photos, the people in charge of the Old Judge cards would just change the team name, and if necessary, do some 19th century photoshopping to get rid of team names on jerseys. In some cases, they added team names to uniforms and reissued the cards. This particular pose used for our Card of the Day is cataloged as pose #5 for McCormick and it can be found with both Chicago and Pittsburgh. Since the 2014 set didn’t label a team name here front or back, this works as a Pirates Card of the Day subject. 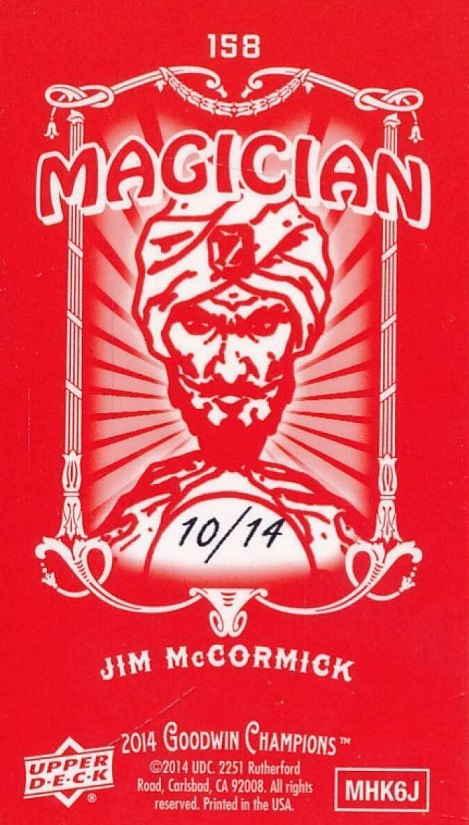 I don’t know what this is and didn’t bother looking it up, but it’s not related to the 19th century set. It’s number 10/14, letting you know that it might not be throwback, but it is rare.

These cards aren’t easy to find because McCormick wasn’t including in the base card set. There were 130 cards in the base set, then 25 cards in the short print set, then another 25 cards called “super short print”. McCormick is in that last group, but this is a variation of a rare card. It’s labeled as a mini red foil Magician back. This particular card is for sale on Ebay for $8.89, if you want a Magician back card that is hard to find. There’s a second one list for $8.50. There’s a Lady Luck back that can be had for $5.49 delivered. That one doesn’t have the red foil writing on the front. Then there’s just the regular mini card from the set, with an $8.37 delivered price tag. That one actually had a tiny bio for McCormick on the back. I didn’t include a scan because it was watermarked by the seller, but in my opinion it’s the best version.