The Pittsburgh Pirates have had plenty of one-game players in their history. In fact, the number is now over 100 (102 to be exact), though that includes pitcher Roansy Contreras, who debuted at the end of the 2021 season. One of the more famous ones on that list is Gary Hargis, and that’s because he played for the 1979 World Series champs. He’s the only one-game player from that team. He got into his only game as a pinch-runner for Tim Foli in the 13th inning of a September 29th game, so he never even got a big league at-bat. Just four players can claim to be one-game players who were part of World Series winning Pirates teams, and three of them played for the 1909 club. Two of those players saw other games in their career outside of Pittsburgh, so the true Moonlight Grahams from Pirates World Series clubs consist of Hargis and pitcher Charlie Wacker (listed as “Jimmy” for his middle name), who threw two innings on April 28, 1909. For today’s Card of the Day article, we look at a minor league card of Gary Hargis, who was born 65 years ago today. 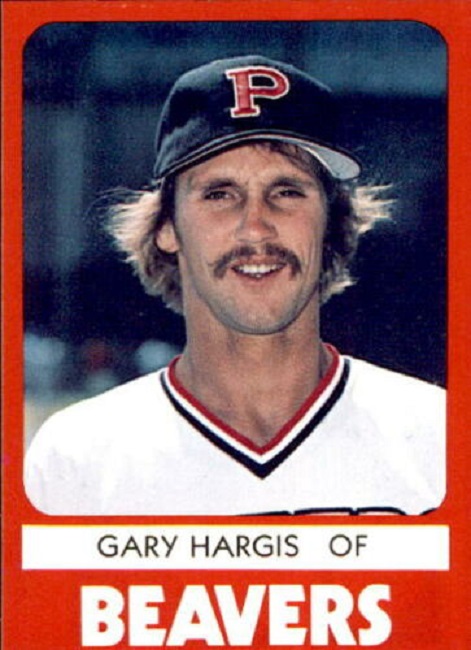 This card is from the 1980 TCMA set, though “set” might not be the right word. TCMA produced a TON of minor league cards that year. They didn’t make a ton of cards, but they covered most of the minor leagues that season and issued them as team sets. Putting together a full set of all of the 1980 team sets would be a monumental task, with a high price tag. Hargis played for the Portland Beavers of the Triple-A Pacific Coast League in 1979, then returned there as one of the last cuts during Spring Training of 1980. Unlike big league cards from that year, these were taken during the season, so all of the players pictured were on the team in 1980. The regular Topps cards were likely to have at least one player shown on each team who wasn’t still there by the time people were opening packs.

This card has the same design as the rest of the cards in the TCMA “set”. Red borders, player name/position in black ink/white box, then the team name in white at the bottom. What is different here from many of the sets is that the picture is in color. Many of the 1980 TCMA team sets had black & white photos. They could afford to be boring with their designs/photos because they were the only game in town, which makes some of these 1980 TCMA cards valuable. Try finding the Ryne Sandberg card from that year. If you do, you’ll pay around $200-$250 for it. If you can get it for less, buy it. 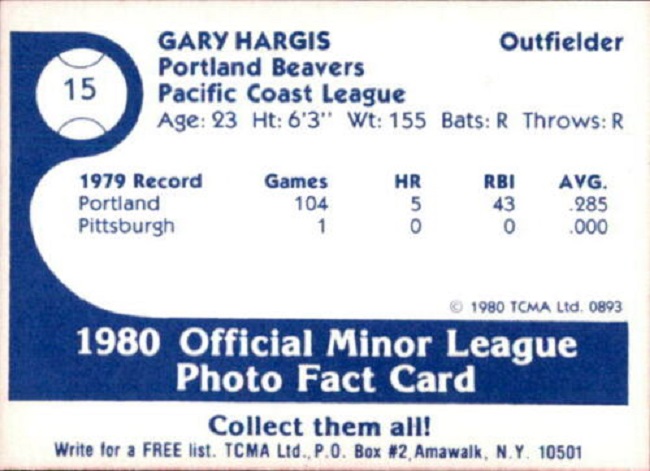 It’s amazing how basic the backs were on these cards. One year of stats for each player and they only listed four categories. It’s cool that you see his one big league game listed. It’s funny looking back on how they referred to their baseball cards, saying they’re the “1980 Official Minor League Photo Fact Card”. Next time you talk to someone about collecting baseball cards, ask them if they have a 1955 Topps Photo Fact Card of Roberto Clemente.

One other interesting note here is the beanpole status of Hargis. He’s listed at 6’3″, 155 pounds. They used to have him put handfuls of infield dirt in his pockets on windy days so he wouldn’t blow away. Actually, that’s just a mistake by TCMA. He wasn’t fighting in the heavyweight division by any means, but you can actually picture a human athlete who is 5’11”, 165 pounds (his actual height/weight), compared to someone who is four inches taller and ten pounds lighter.

If you’re interested in this card, there aren’t many current options. This card came from someone selling one for $20 delivered. That’s way too high, but also, if someone really wants the card, they don’t have many other options. There are better options though, with one for just over $10 delivered and another selling for $3.50 delivered. If you have friends who are fans of Hargis as well, there’s a seller who broke up eight team sets and sold them in eight-card lots for each player. For $9.95, half of the price of the card scanned above, you can have eight cards of Gary Hargis on the Beavers.