Almost one year ago today, we posted about a rookie card from the 1978 Topps set that included Pittsburgh Pirates outfielder Mike Easler, as well as three other young outfielders from around baseball. There was another four-player card for rookie outfielders that year, and the other one featured another player from the Pirates, as well as someone who would spend a long time in Pittsburgh.

The choice from the Pirates was 23-year-old outfielder Miguel Dilone, and it was really interesting because he played in the majors during each of the 1974-77 seasons, but couldn’t break into the lineup for regular work. The card also included Dave Bergman of the Houston Astros and Willie Norwood of the Minnesota Twins, plus a prospect from the Kansas City Royals who was getting a lot of attention. Injuries cut short his big league career as a player, but manager Clint Hurdle helped the Pirates to three playoff appearances during his nine seasons with the club. Here’s a look at card #705 from the 1978 Topps set and the four prospects on that card. 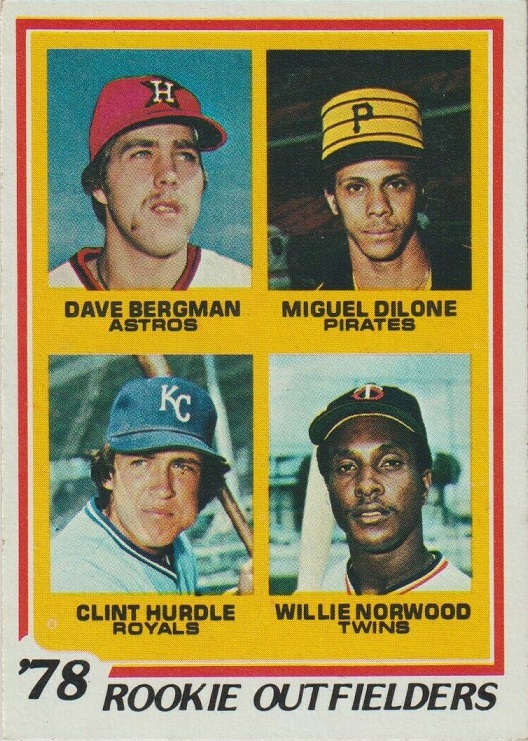 I’ll keep this part short and look at each of the players after we look at the back. The four-player layout limits the space for each player on the front and it makes it easier to get away with the old airbrushing that Topps did a lot during this era. Little did Topps know in 1978 that we would be able to make scans big and see that the cap on the head of Dave Bregman definitely wasn’t there in the original photo, and my guess is that color in the collar was also added later (not really a guess, just being nice by not saying how bad of a job they did). 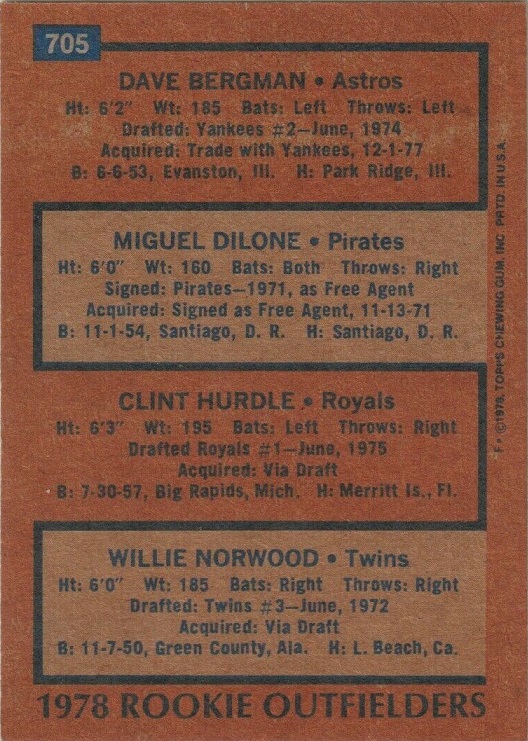 These old cards from Topps didn’t give you much information on each player, so you were sort of going blind into the process of deciding the best rookie cards in the bunch (plus the color choice here was just awful). You have two things that help you here though, which helps a little in place of stats. You can look where they were drafted to see how scouts thought about them, but also how long it’s taken them to get through the minors. Then look at their age and determine whether they are too old to be legit prospects. Topps usually picked guys who either had big league experience or they were right on the cusp of the majors. It’s not a perfect system, but you don’t exactly have anything else to go on here, and you couldn’t head to the interwebs to check out their stats.

So by that method, these prospects would rank (from best to worst): 1: Hurdle 2: Bergman (it’s more like 2a/2b) 3: Dilone and 4: Norwood. Hurdle was getting press early in his career, including a Sports Illustrated cover during Spring Training in 1978, so I’m guessing that this card was pretty popular early on. Now let’s look to see how they did, going in the same order as I just rated them.

Hurdle’s career was derailed by injuries, but was the early praise warranted? The answer would be yes. He hit .328 with 54 extra-base hits in Triple-A at 19 years old in 1977, and he did well in a brief stint in the majors. In 1976, he had 118 walks and 46 extra-base hits in 127 games in A-Ball. This was a great choice for a player by Topps. His best season in the majors was 1980 when he hit .294 with 31 doubles, ten homers and 60 RBIs in 130 games. A back injury put him on the disabled list twice in 1981 and limited him to 28 games that year. He never recovered his early glory, playing just 156 more games in the majors over the next six seasons.

I could have went either way with the #2 player here, but I went with Bergman for the shorter minor league career and high draft pick, which made up for Dilone being younger. Bergman had two partial seasons in the majors, but it amounted to just 12 games with the 1975/77 New York Yankees. He had two solid seasons in Triple-A in 1976-77, with better stats during the second year. That leads you to believe that he was blocked with the Yankees, a World Series team, and would have a better chance with Houston. Bergman had the best career of this group, playing 1,349 games over 17 seasons. Not many players can claim those numbers, so he was a solid choice by Topps. He didn’t become a star, but his best season came with the 1984 Detroit Tigers, helping them to the World Series title.

Dilone debuted in 1974 and by the end of the 1977 season, despite playing all four years in the majors, he had 59 at-bats. That’s because speed was his strong point, not the bat. Just after that Sports Illustrated article came out featuring Hurdle, Dilone was traded to the Oakland A’s, where he was able to play regularly right away. He played 135 games in 1978, which was his career high. However, he had more plate appearances during his of the 1980-82 seasons with the Cleveland Indians. Dilone actually had a strong year in 1980, posting a .341 average and 39 extra-base hits in 132 games. He finished with 3.0 WAR that season. In his other 11 big league seasons combined, he had -0.5 WAR. He played 800 career games and stole 267 bases. He even came back to the Pirates for a short time in 1983. It was a decent career, far from a bad choice by Topps, but it would be better if he was the fourth best player here.

Norwood was chosen fourth simply because he was 27 years old and he had five years since being drafted out of college to establish himself. My system worked because he had a brief MLB trial in 1977 and he hit just .229 in 39 games. Did he belong on this card though? A short answer is yes, and that’s because he hit .412 in 53 games at Triple-A in 1977, with a 1.085 OPS. That was after hitting .303 with 21 doubles and 15 homers at Triple-A in 1976. He already had success at the level, then took it to another level. The age test worked though, as he played four years in the majors and he totaled -1.3 WAR, mostly due to poor defense. He had a decent 1978 season, at which point this card probably looked like it could be a good one with Hurdle’s praise and Dilone playing regularly.

As you can expect with none of the four players becoming superstars, the value here is low now. Hurdle took a run at a strong managerial resume, but ultimately fell short there too, other than the longevity part. There are many options on Ebay in the $2-$3 range delivered, so check the scans and find the best one. There is one card signed by just Dilone which is $15, and another signed by all four, which is a small fortune, but obviously extremely difficult to replicate. The seller wants $199, plus $25 shipping for some reason. Maybe one of the players hand delivers it.