On the anniversary of the date that the Pittsburgh Pirates traded for pitcher Jerry Reuss, we look at an interesting card from 1976, which has a great pose and it’s a tougher to find variation of his regular Topps card from that year. The O-Pee-Chee set is the Canadian cousin of the Topps set, with the same cards and same look on the front, but the backs had slightly different coloring and some of the back is written in French. They aren’t as collectible as their Topps counterpart, but if you like the challenge of putting a set together, then it will take a lot more time to collect the entire O-Pee-Chee set. Here’s a look at card #60 from the 1976 set featuring Jerry Reuss. 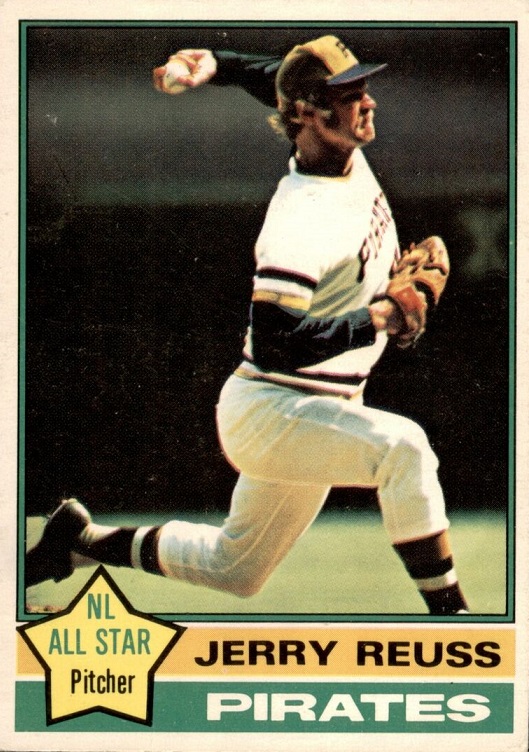 I had to crop this scan a bit because the cut on it was so uneven. I mentioned that the 1976 Topps set and the O-Pee-Chee set look the same on the front. While it’s not a “100% of the time” method, you can usually spot an O-Pee-Chee card but the rough edges, which is/was a little easier when the card is new. A nice new Topps card has a clean cut on all four edges, but if you’ve seen a group of new O-Pee-Chee cards, you’ll find a lot of fuzzy edges on the cards.

I like the 1976 Topps set, even though all of the Pirates cards have the coloring of cards that should belong to players on the Oakland A’s. This card is a bit different from most of the other cards in the set because it has that star in the bottom left that says “NL ALL STAR Pitcher”, which is only on specific cards for exactly the reason you think. While the photo here is a bit dark, which happened with some of these action photos, it’s a great shot of Reuss delivering a pitch. Topps only started actual action shots a few years earlier, and it took them some time to get the good quality shots down consistently. 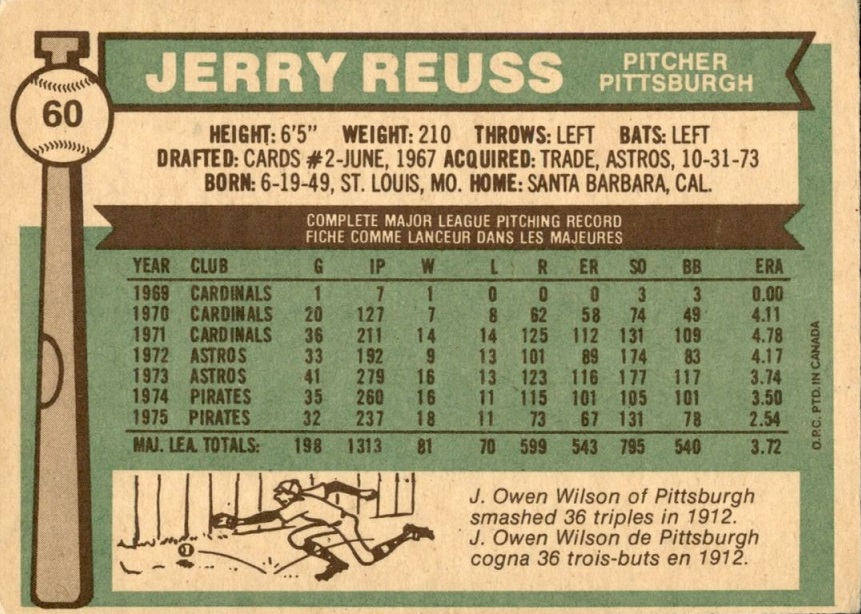 The back is the giveaway here, and not just because the “O.P.C. PTD. IN CANADA” going down the right side. The Topps backs have a gray background color and darker green/brown colors than you see here. If that didn’t give it away for you, then the translation in the cartoon may do the trick. There’s also a translation right above the stats under the complete Major League pitching record. Of course, I call it the translation, but since these cards were printed and distributed in Canada, then the top part would be the actual translation I guess. Now that I think of it, they speak both languages all over the country, so I’m not really sure which one is the translation now.

The Pirates acquired Reuss from the Houston Astros on Halloween in 1973 for catcher Milt May. It clearly worked out well, as he won 34 games during the 1974-75 seasons and the Pirates won the National League East title each season. Reuss was the gift that kept giving, as he put in a solid stint with the Pirates, then got traded for Rick Rhoden, who was packaged for Doug Drabek. You put those three pitchers in their prime on your staff and your team is going somewhere.

As I mentioned above, these cards aren’t easy to find, but that doesn’t make them expensive. Just three of these are listed on Ebay right now. Two are mid-grade that are listed for $5.70 and $7.89 delivered. One is a graded copy, selling for $53.95 delivered in a PSA 8. If the graded copy sounds like a good option, but the price turns you off, there’s a “best offer” option on the listing, so it can be had cheaper. There are no sold listings for this card in the last three months, so they really don’t come up for auction often.