Today’s Card of the Day is the second article featuring Jim Bibby and the second one featuring the 1981 Fleer Star Sticker set. The first Bibby article was posted exactly a year ago today. That’s not a coincidence, it’s because he was born on this date in 1944. That day we looked at his 1981 Topps card. Five days before that Bibby article, we covered the Star Sticker set when celebrating the birthday of Omar Moreno. Today we look at a great action pose from the 128-card set put out by Fleer, which included six members of the Pittsburgh Pirates. 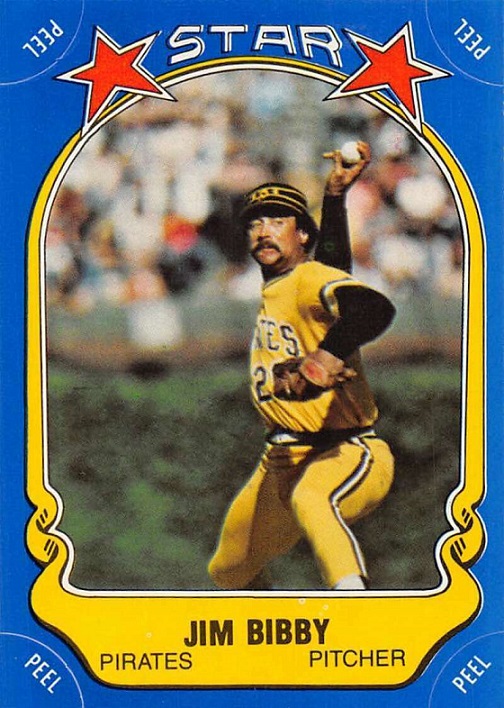 Before 1981, Topps had a stranglehold on the baseball card market. Then Fleer and Donruss were able to break that monopoly in 1981, when they released MLB cards that were licensed by both the players and the teams. Fleer not only put out a 660-card regular set, they also issued this Star Sticker set in separate packs. You would get five of these stickers in a pack and 36 packs in a box. Considering that you were getting 180 cards in the box for a 128-card set (125 players/three checklists), you had a pretty fair chance of completing a set by buying one box.

The front design here is very different from the regular set, which was a bit dull for a first attempt, but it’s not a bad look. These sticker cards stood out much more, with the bright blue borders and the more detailed design for the box around the players, especially compared to the regular set which was your basic small border rectangle with rounded corners. Plus you have the two big stars up top, with the word star written between them. They may have went a little overboard with these sticker cards by giving you four different options to peel the sticker off. As you can see by the white outline around the word peel, the sticker had an odd shape if you actually peeled it off, which I wouldn’t recommend doing. I’m sure plenty of people peeled them off back in the day, which makes them slightly harder to find now.

This particular card gives you a nice in-game action shot of Bibby in the full gold uniforms during a game at Wrigley Field. 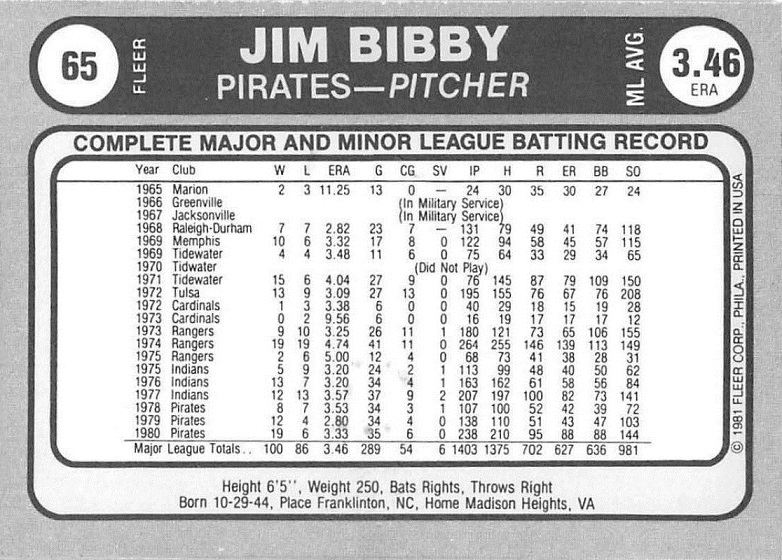 The back is the exact same look and set up as the 1981 Fleer set, but the colors are different. The gray outer border here is almost the same as the regular set, just a lighter shade. On the regular cards, the name/team/position at the top are in yellow, as is the box around the stats. As you would also expect with it being a different set, the number for Bibby is different. He’s #370 in the regular set.

I really like what Fleer did here by including all of his stats, but also listing his teams during the 1966-67 seasons. Players had to be reserved somewhere when they were serving in the military, even if they didn’t count against those rosters. His missing 1970 season was due to back surgery. Bibby had a great 1980 season and finished his year by winning his 100th career game in his final start.

If you’re interested in this card, you have a small assortment of low-priced choices on Ebay. These cards aren’t as easy to find as the regular 1981 Fleer cards, but they aren’t difficult to find either. There are multiple options for this card in the $1-$3 range delivered. The only auction of note is one that has an authenticated autograph. Bibby isn’t a difficult signature, but he did pass away 11 years ago now, so they aren’t getting any easier to find. I mention that because the graded one is just over $40, while most of his autographed cards are in the $10-$15 range, not authenticated. If you’re wondering about the popularity of this set/card, there are zero sold on Ebay in the last three months, and that’s with options currently going for a dollar delivered.