Today’s Card of the Day comes from a set we haven’t featured here enough. The 1955 Topps set has been the subject of this series just twice in 20 months and one of those was a guest submission for the Roberto Clemente rookie card. Even the article I wrote a month later was published 13 months ago, when I looked at the card of Dick Hall on his 90th birthday. So you can say that we are long overdue for the set. We got with another player born on this date, looking at Pittsburgh Pirates infielder Gair Allie on card #59 in the 1955 Topps set. 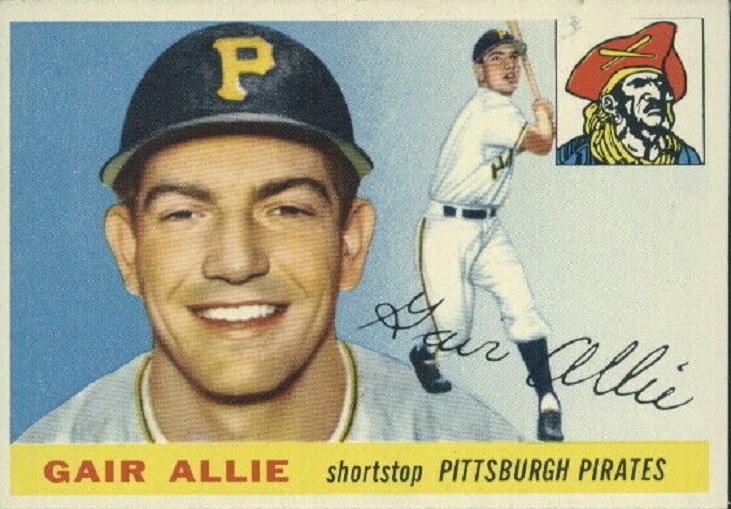 I’ve mentioned multiple times that the 1956 Topps set is one of my favorites, but I could imagine if I was around when those cards were about to come out, I would be thinking “How could Topps improve on the 1955 design?”. I love the horizontal layout, which they did for the first time this year. I’m a fan of the two drawings of the player on the front, with one bigger portrait and one action shot. I also like the Pirates logo in the top right corner (one of my favorites) and the facsimile autograph. Hard to improve on this look, but Topps did it in 1956 by using almost the same exact design. The change they made was simple, switching the background from just colors like you see above, to an actual baseball scene in 1956. Checkmate 1955, you got beat by your spawn. Yet this design is still somewhere just outside of the top five Topps designs ever for me.

I have a quick/amusing 1955/56 Topps story I can share. Years ago I was buying cards from the 1950’s/60’s from a local baseball card dealer. One of the cards I got was Jackie Robinson in nice shape. Cut to a few years later and I decided to collect a set one-by-one for fun. I thought about it for a while and remembered the Robinson card and then decided on the 1956 Topps set. So I bought some cards at a show, got a few off Ebay, got about 30 cards in, then decided to dig out the Robinson and it was a 1955 Topps. I didn’t even know what I had. If I had to summarize in one sentence my beginner 1956 Topps set, which I paused after completing the Pirates team set, I would say “The reason I collect the 1956 Topps set is because of a 1955 Topps Jackie Robinson”.

That’s probably not as bad as the time I bought a 1959 Topps Keystone Combo card of Hall of Famers Luis Aparicio and Nellie Fox off of Ebay because I thought it was a great looking card. Then when I got the card, I decided to put it in my collection and I already had two of them. You might think that sounds like I have a lot of 1959 Topps cards and couldn’t keep things straight, but I don’t. Counting the three Aparicio/Fox cards, I might have ten cards total from the set. 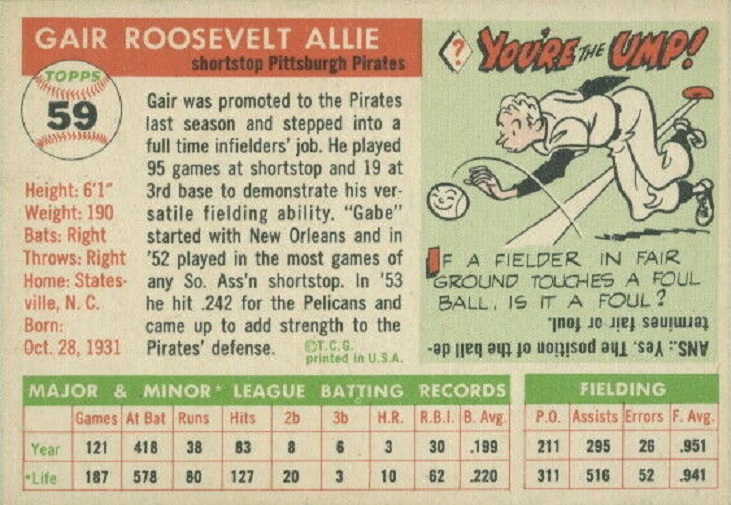 I’m a big fan of the backs of the 1955 Topps cards, with the Christmas coloring, mini bio for each player and those fun cartoons. I usually make fun of the generic gray Topps man, but I was never talking about the hair color! Where did they get the guy for this cartoon, maybe Bobby Byrne from a 1954 Old-Timer’s game? That’s a good reference! He was a Pirates third baseman (1909-13) and he was 73 years old in 1954 when they drew this up. Why is the baseball smiling? Anyway, the best part of this back is where they call Allie a “so ass’n shortstop”. Must be some 1950’s slang for a slick fielder and it definitely doesn’t stand for the Southern Association. Here’s an interesting side note for this card, which shows his 1954 big league stats and his career minor league stats: Those “year” stats are his entire big league career. He was already done in the majors before people were getting this card in packs. I’ve never heard the “Gabe” nickname before, but why would someone named Gair Roosevelt have a nickname?

The card is all over Ebay because this is a very popular set to collect, so you can find it in any grade you want (unless you want nicer than one graded 8.5), with multiple options. About 40 of these cards have sold in the last three months, which is a fairly high number for cards we cover here, but there are almost 400 active auctions. While it’s a very popular set, the Ebay supply far outweighs the demand. There are A LOT of options that are listed for under $4 delivered, so find the best one and treat yourself to a nice card! You deserve it.