There aren’t too many sets that I feature here where I don’t have at least one card from the set. This is one of those sets, though I’ve looked at them many times, so I’m familiar with the 1953 Red Man set, especially the best Pittsburgh Pirates card in the set, #15 Ralph Kiner. The man who led the National League in homers for seven straight seasons to open his career was born on this date in 1922. 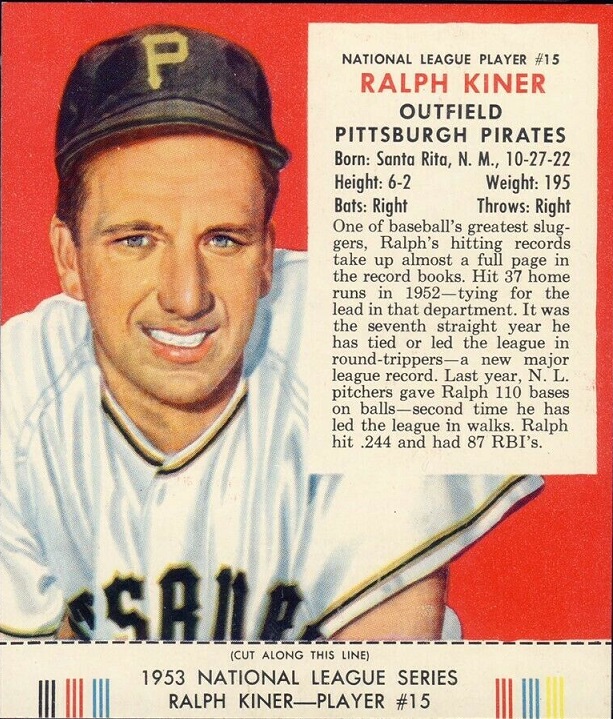 The Red Man set represented a chewing tobacco company that still exists today. They issued a 52-card set that measured 3-1/2” by 4”. The stub at the bottom cut be traded for a special product advertised on the back (see below). Judging by the cards on Ebay, both active and sold over the last three months, a little more than half of the cards still exist with the stub. I’d put the ratio of 60/40 stubs. I personally like the look better without the stub, but I wouldn’t have cut it off if they were around when I was a wee lad.

Some of the cards in the set had baseball background, but the rest all had a solid one-color background like the red you see here for Kiner. The back here has nothing about Kiner, but you see all of the details on the right side in a box that includes his bio info and some of his power hitting feats, including leading the league in homers for seven straight seasons. What they left out there is the fact that he led the league in homers during each of his first seven seasons in the majors. There’s a mistake in that section. His 110 walks was the third time he led the league in walks, not the second. 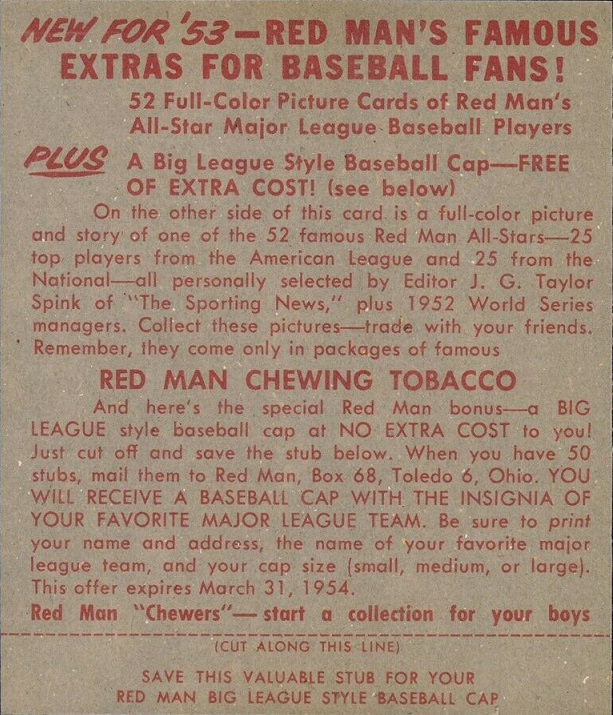 The back is just one big ad for the set, the Red Man Chewing Tobacco product, and an offer for “a baseball cap with the insignia of your favorite Major League team”. The back tells you to cut along the dotted line to save that valuable stub so you can get the cap. You just need 50 of them to get the cap. Before you started cutting the stubs off of your Red Man collection to get a Pirates hat, note that the offer expired on March 31, 1954. The funny thing is that if you did that now, cutting the stub off of just one Ralph Kiner card in nice shape would end up costing you more money than buying a cap on your own.

If you’re interested in this card, then you have a range of options because of that stub. The ones with the stub still attached will go for more money, but the card looks just as nice without it, so some collectors are fine with no stub. Besides the range of conditions for both options (stub/no stub), there are also two autographed cards currently up on Ebay. Kiner lived a long life and he was a generous signer, doing many shows, so his autograph is rather easy to find in general, but finding it on specific items is harder. There’s an authenticated autograph for $80 (with a best offer) and another one that isn’t authenticated, but comes from a very reliable seller, which is going for $45. The “stub on” version of this card runs from a very high $495 for an SGC 88, dropping down substantially to the next highest priced one at $120. You can get them for as little as $36 for a decent mid-grade version. Without the stub they run from $30-$55, but low grade copies have sold in the $10-$20 range.