Today’s Card of the Day took me a lot longer to find good scans for compared to actually finding which card I wanted to feature. Pittsburgh Pirates pitcher Francisco Liriano turns 38 years old today. He pitched for the 2013-16 and 2019 Pirates. I usually go to this site called Ebay to search for my card choice, so after I entered “Francisco Liriano Pirates”, the first result ended up being today’s Card of the Day. It was an instant eye-catcher, and I basically decided right then to use it, though I’ll admit that I scrolled through about ten more cards before going back and refining the search to 2016 Topps Stadium Club so I could find the best scan and get the price range. Finding the actual scan took much longer when the first 5-6 auctions I clicked on didn’t have a back scan. You’ll see why I decided to keep searching scans and stick with this card. 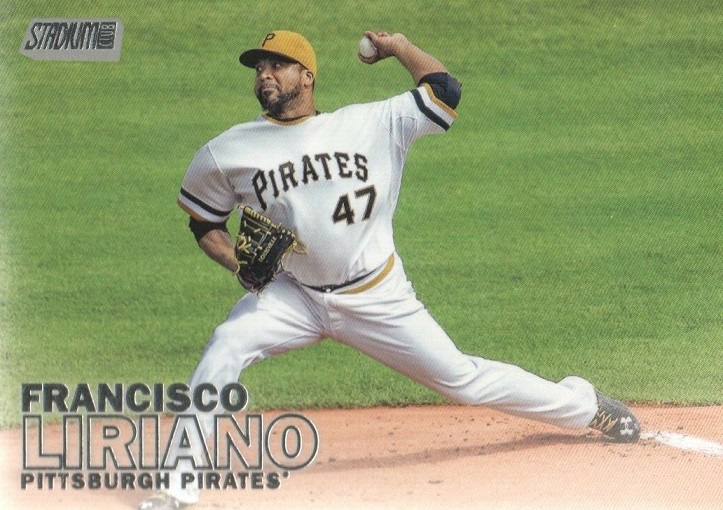 I’m a big fan of the borderless design here, even though some of my favorite sets (Topps 1962, 1987, etc) are made by the border. What I really like is the horizontal layout, especially when it’s in a set that doesn’t use that layout for every card. You get a great action shot here that you wouldn’t get if it wasn’t a horizontal layout. What makes it even better is the throwback uniform he’s wearing. The rest of the design is rather basic, one color used for the writing, just the player/team name in the bottom and a small Stadium Club symbol in the top left. They could have done a little better with the color on front, but it’s actually important to the set, as I will talk about in the price section below. 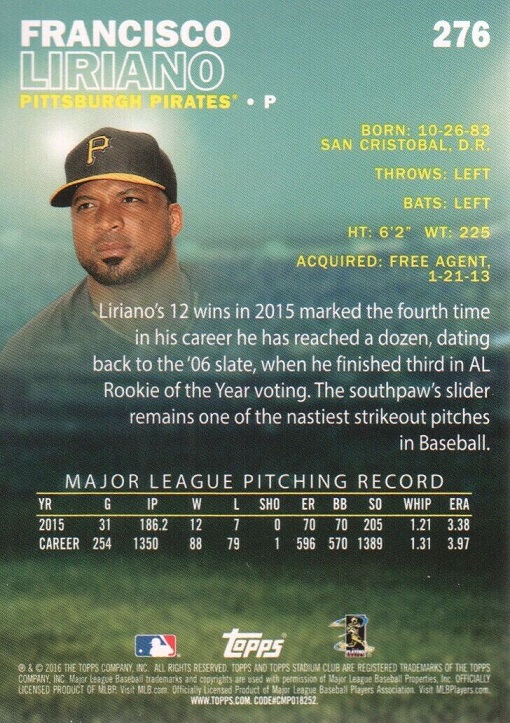 The back here is a little strange. To me it looks like this is a tribute card to someone who has passed away, with a darkened field and a photo looking off in the distance that fades into the sky. I’m not a big fan of more recent sets having just one year of stats, plus they limited it to ten categories. They didn’t put too much info here. I dislike the back design/layout as much as I like the front of the card.

The price section has some options if you enjoy the chase cards. The card above is just the base card from the set and you can get it cheap ($2 or less/delivered). They also printed a 5×7 version of this card, which is basically twice the length/height of a normal sized card. The most expensive card right now on Ebay is not only the harder-to-find large card, it’s also the gold version of that card, which was numbered to just ten copies. I mentioned that the one-color writing on front was important for the set. That’s because you can find the Liriano card on Ebay right now with gold or black writing as well. There’s also a “rainbow foilboard” version numbered to just 25 copies, plus a members only version that is also rare. Here’s a list of the prices for the tougher to find cards:

Members Only: $8.99 with a make offer option

Gold: Six copies, two lowest are just over $3 each delivered