Today’s Card of the Day is a card that I mentioned featuring here at a later date. It was so long ago that I forgot about it until I got a reminder today. This is the second time that Jim Rooker is the subject of our Card of the Day article. The first time was back in 2020 on his birthday, which was just over 13 months ago. That card selection was his 1976 Topps card. It won out for the same reason so many other cards end up here. The look of the card catches my eye while scrolling through choices. In that article, I mentioned that I also considered using his 1979 Topps card because it had a game action photo, which wasn’t on any other cards I saw that day. The Pirates traded for Rooker on this date in 1972, so today is a perfect day to check out card #584 from the 1979 Topps set, featuring Pittsburgh Pirates left-handed starter Jim Rooker. 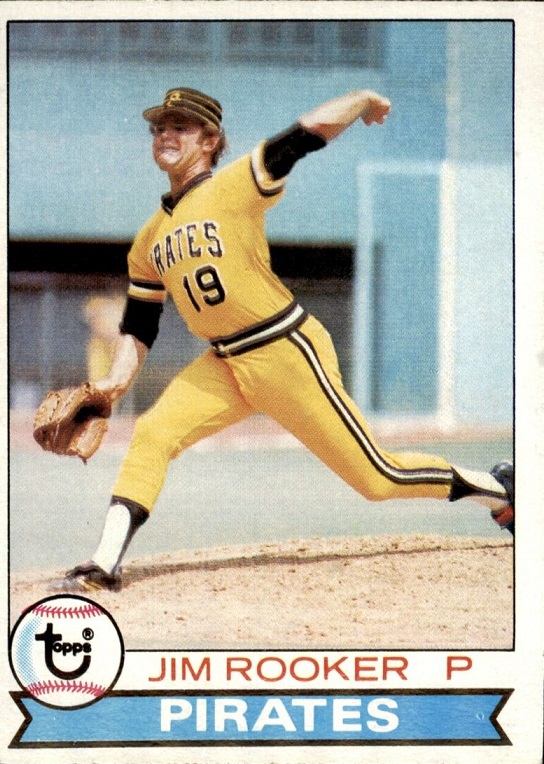 I’ll start off by saying that I am not a fan of the 1979 Topps design. It’s extremely boring and they didn’t match up team colors to the colors used on front. Then there’s that big Topps baseball in the corner with that awful logo that looks like a smiley face was added to the bottom of a cross. Topps really phoned in the last three years of the 1970s with designs, but they were only two years away from one of my all-time favorites at this point. The Rooker card is nice because it has a game shot, along with the all-gold jerseys from the mix-and-match era. However, the photo quality is awful, and I looked through a bunch of scans before picking this particular one. Where are his eyes? 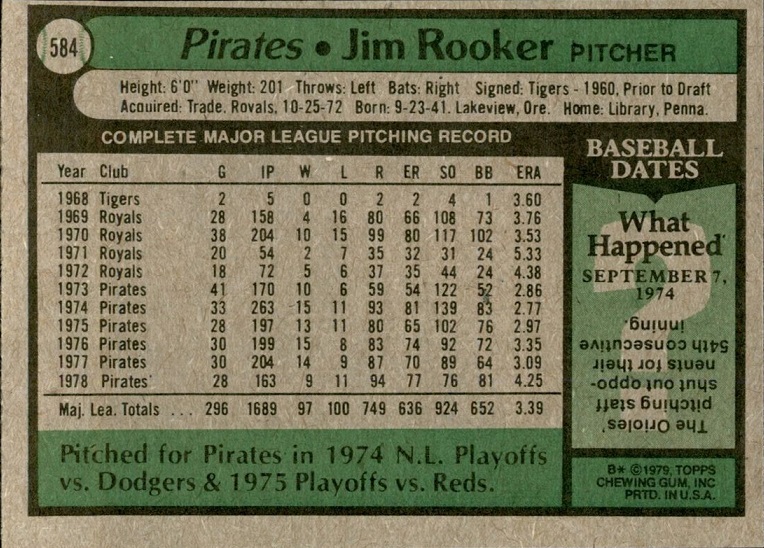 The back of this card isn’t that bad. I like that the stats are easy to read, and I’m not mad about not including minor league stats because he already had 11 seasons in at the big league level. The note at the bottom, while not really giving you much information, is a nice foreshadow of things to come. It’s telling you that he had playoff pitching experience and you shouldn’t be afraid to use him in game five as the starting pitcher with your team down 3-1 in the series.  Clearly they were predicting that the Pirates would play the Orioles in that series. How else could you explain that trivia question on the side? Well played, Topps.

This card is cheap and easy to find on Ebay. There are 55 current auctions listed and a few are going for as little as $1 delivered. There are three autographed cards ranging from $6 to $13.99. The lower priced one is in ink and it’s not a strong autograph. The higher priced one is really nice looking, but in between those two prices is one for $7 that appears to be the best option. It’s not authenticated, but it comes from a very reliable seller. The only closed auction of note out of the ten that have sold in the last three months is a PSA 7 that went for $9 delivered. I can guarantee that whoever sent it out to get graded thought it would do better with the grade. Anything under a PSA 8 with a 1979 Topps common and you’re definitely losing money when you go to resell due to the grading/selling fees. What that means though it that it’s probably a really nice looking PSA 7. From the scans, it looks like the flaw is the centering, but I’d have to see it in hand to be sure.