If you’ve read this features regularly since last March when they started, you probably know that the 1977 Topps set is one of my least favorite designs, so we can get that part out of the way right away. The front design is so plain looking, and even in perfect condition, all of the photos in the set look faded. That second part is a big piece of the turn-off with this set, because Topps has used the 1977 design in their recent Heritage sets, and with quality photos and bold colors on the front, the cards don’t look half as bad. Even the back of the 1977 set turns me off as a collector because the coloring is awful.

What helps the 1977 Topps set for our Card of the Day feature is the quality of players on the Pittsburgh Pirates at the time. Bill Robinson is the only individual player who we have featured here on a 1977 Topps card (we also used a Rookie Outfielders card). That means we have plenty of other star players to focus on in this series in the future. We look at one of those cards today and it’s one of my favorites in the Pirates team set from that year. It features a young outfielder on this first Topps card. Here’s a look at card #104 from the 1977 Topps set, the rookie card of Omar Moreno, who turns 69 years old today. 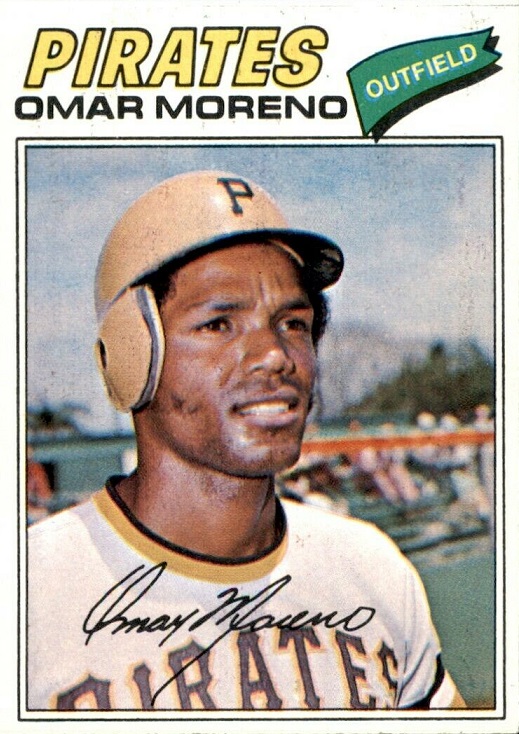 I’ll admit that this card starts off strong and it ends there. The “PIRATES” in yellow looks great. The boring white borders, plain double black boxes around the photo, poor photo quality, unimaginative writing for the player name and green pennant combine to equals five parts bland, with one good quality. Look past the bad, there’s the actual photo itself which makes this particular card better. We see a young Omar Moreno, who played six games for the 1975 Pirates at 23 years old, followed by 48 games for the 1976 team. When this set came out, he was one year away from his first of two straight stolen base crowns. Pirates fans saw him pilfer 71 bags in 1978 and tie a single-season team record that was 90 years old. He then he stole 77 in 1979, helping the Pirates to their fifth World Series title. He followed that up with 96 steals in 1980, setting a team record that has never been approached in the 41 seasons since (Moreno and Tony Womack each had 60-steal seasons). 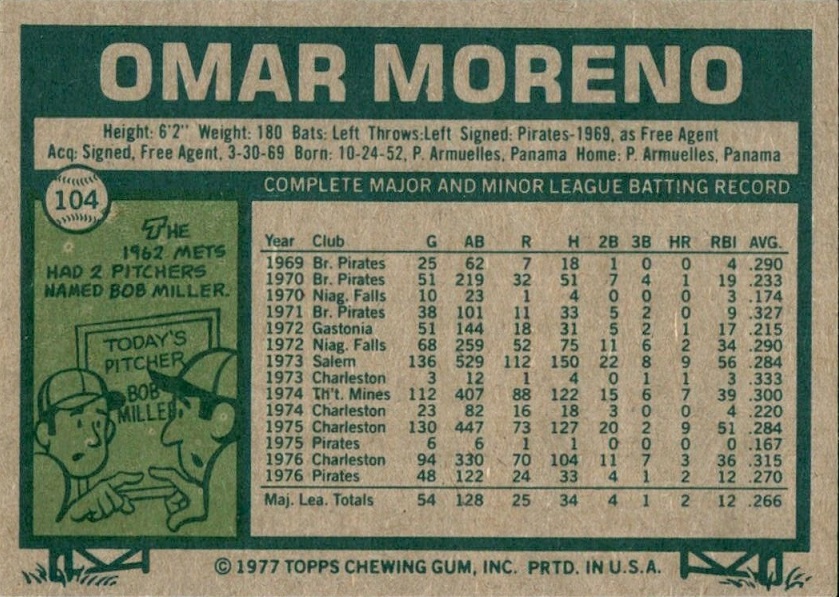 Nothing says eye appeal like two shades of green on gray. Topps did something right here, just not in the design. They have all of Moreno’s stats from his debut as a 17-year-old up until the 1976 season. It would have been nice to have something about stolen bases here. I don’t expect them to change their stat categories just for certain players, but maybe a quick note that he had 304 steals in the minors. Instead, they included a cartoon, where generic gray Topps man is green and he plays twins for pitchers Bob Miller and Bob Miller, who weren’t twins. As a side note, one of the Bob Millers was just a reliever, so his name would have never been up as today’s pitcher. The confusion could have easily been avoided though by saying lefty or righty, because they threw with different hands. Middle initials would have worked as well. Who am I to put generic gray Topps man out of work though, so the thought behind the cartoon was fine. I just would have preferred something about Moreno’s running ability.

You’ll be happy to know that Omar Moreno rookies are basically a steal on Ebay. They are easy to find in many grades, with 75 options up right now. The most expensive ones are autographed an even they go for no more than $15, with multiple options. You can get the card without the autograph for as little as $2 delivered, with many options around that price. Happy Collecting!