Today’s Card of the Day features a Hall of Fame pitcher who spent a short time with the Pittsburgh Pirates and made it into a regional set produced for KDKA. He wasn’t on many cards with the Pirates, and this particular set offers something that the others from that time didn’t offer.  This is our first card featured from this 23-card KDKA set, and it’s the second time that Bunning has been featured here. The first was from a set put out by Pacific Trading Cards, which we posted exactly one year ago today. Here’s the 1968 KDKA card of Jim Bunning, who was born 90 years ago today. 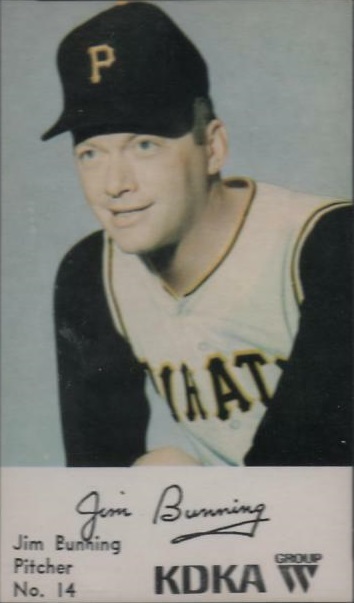 This card offers you a rare card of Bunning on the Pirates. He appears in the 1968 and 1969 Topps sets with the Pirates team name on the front, but both pictures are closely cropped head shots with no hat. However, both have a little bit of jersey showing and it’s clear that he’s wearing a Phillies jersey in the picture. I say “clear”, but what I really mean is that by process of elimination, we know the colors showing on the cards are not Pirates uniforms and they match Phillies uniforms. They close cropped/no hat photo is a tactic Topps used to have photos on hand in case a player changed teams late. I don’t know why they never got a Pirates photo for the 1969 set, but it should have been fairly easy to get one at some point.

This is a nice little card that measures 2 1/2″ x 4″, which is slightly taller than your average card right now that you get in packs. I like the top photo with all of the info at the bottom (name/position/uniform number), along with a nice facsimile autograph. Sure it has an ad for KDKA on the front (and back) but that doesn’t take away from the card. I’m willing to bet that the number at the bottom might have been a little confusing because this card doesn’t have an actual card number.

Back of the card: 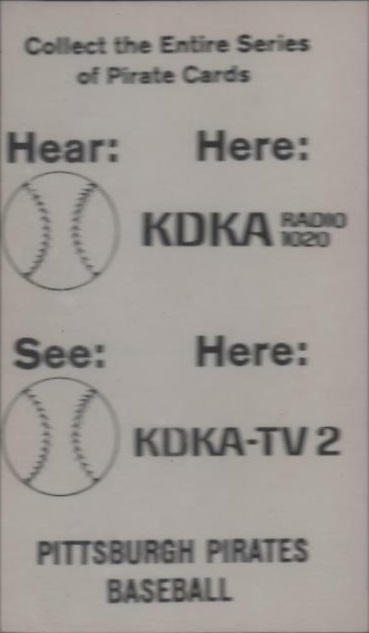 The back is just a simple advertisement for watching and listening to the Pittsburgh Pirates through KDKA. I think it’s saying that you can hear baseball on KDKA Radio 1020 and see baseball on KDKA-TV 2. I’m guessing that’s what the “Hear:” and “See:” are trying to indicate with the crude drawings of baseballs below below each one. I would assume that most people would know they meant baseball when they read “Pittsburgh Pirates baseball” on the card or saw a picture of Jim Bunning on the front, and wouldn’t need two pictures of baseballs to guide them along. Maybe something got lost in translation between describing what they wanted and what was actually written on the back because it just looks odd.

Another bit of oddness is the top part where it says “collect the entire series of Pirate cards” without telling you how many cards to collect, but that could have been marketing. If people don’t know how many they are supposed to collect, then they keep looking for them. Especially with cards that have ads for a company on them, it keeps them relevant longer. There are some older sets where the numbers on the back don’t match up, or they intentionally short-printed a card to make it hard to find. Or it could just be like the baseball drawings and literally a few minutes of thought went into the entire back.

If you want one of these cards, you can find them on Ebay in the baseball card aisle. There are currently seven auctions for this card. One auction has five cards and they are asking $50 delivered. Another auction is an SGC 86 (PSA 7.5) and it’s $70, with a best offer option. Before you put on your running shoes and go out to get that one, you might want to consider a PSA 8 with an asking price of $43.45 delivered. It’s not only a slightly higher grade, PSA cards usually get better prices for similar grades in SGC holders.