Today’s Pittsburgh Pirates Card of the Day comes from the 1923-24 Exhibit set and it features pitcher Johnny Morrison, who played for the 1920-27 Pirates, taking part in two World Series seasons with the team. Along with his brother Phil Morrison, they are one of just 25 groups of relatives to play for the Pirates. They are one of nine pairs of relatives to be teammates with the Pirates, which they did during the 1921 season. Johnny Morrison won 17 games for the 1925 World Series champs and he was a bit player with the 1927 team, but his best year came in 1923 when he won 25 games and he threw over 300 innings. This Exhibit set came out at that time, designated as a 1923-24 release. He’s featured here on this particular day because Morrison was born on this date in 1895, so here’s a look at his 1923-24 Exhibit card.

Here’s the front of the card (the back is black): 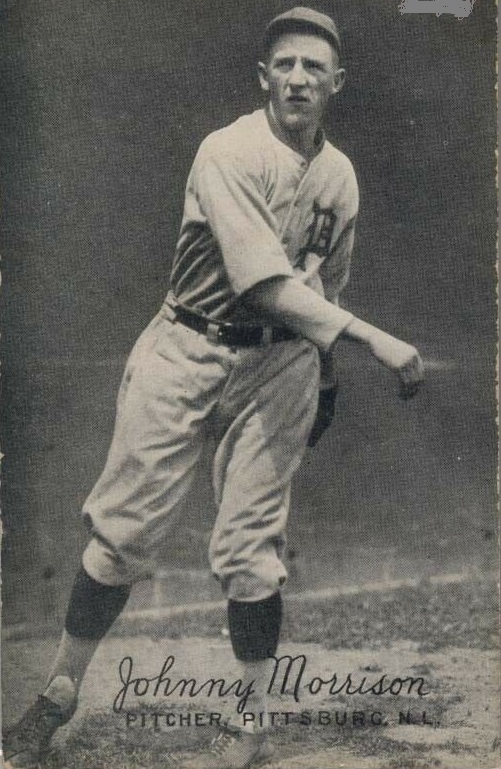 This photo was taken in 1922. I know that because the uniform is a one-year uniform in Pirates history. It’s the only year for the Old English style “P” on the uniform. The Pirates went through changes in their uniform during his first four seasons, which would be the only options for this photo. In 1920, there was a small “P” on a pocket on the left chest (right side if you’re looking at it). In 1921, the pocket was gone and the “P” was larger, in the same place. You see the 1922 style above. In 1923, there was nothing on the front of the jersey and the “P” insignia was moved to the left sleeve.

Exhibit cards were slightly bigger than your normal cards you find today. This set has cards that are 3-3/8″ x 5-3/8″ in size and there are 59 cards in the set. They were distributed by the Exhibit Supply Company of Chicago. Collectors were able to get them new from penny arcade vending machines. Most had this same basic design, with a photo taking up the whole front, along with (in this case) the players name in cursive, along with his position, team name (city only) and the league.

You won’t see much of Johnny Morrison in this feature because this is the only card available from during his playing days. He’s also in the 1993 Conlon Collection set, so I could use that card at some point here, especially if I want to feature him on his birthday again. He was too good to use just once in this series. The 1920’s weren’t a popular time for baseball card sets, but it’s a little surprising that he only had one card, considering that he had two 17-win seasons, a 25-win season and he pitched for two World Series teams. You would have thought that resume would have earned another card.

I mentioned that this is a blank back card and that’s because it’s supposed to be a blank back. However, there was only one scan available for this card and the particular card has plenty of writing on the back. I tell you that in the price section because it’s the only price I have available, including completed auctions over the last three months. This scan is from an Ebay auction for a card graded PSA 4 (MK). The MK is a qualifier and it tells you that there is some type of marking on the card. Someone wrote stats on the back of this card, so there’s actually a lot of marking on it. The asking price is $216 delivered, with no “make offer” option, so if you want one, you need to wait, or pay up.