In 1971, a gasoline company called Arco put out a regional set of baseball cards that featured 49 players total from four teams, the Pittsburgh Pirates, Philadelphia Phillies, Boston Red Sox and New York Yankees. These “cards” were 8×10 in size, about three times bigger than your normal card size in both measurements. Being a regional set, the cards are somewhat rare today, and due to the size they were popular for autographs. Here’s a look at the card of pitcher Dave Giusti, who the Pirates traded for on this date in 1969. 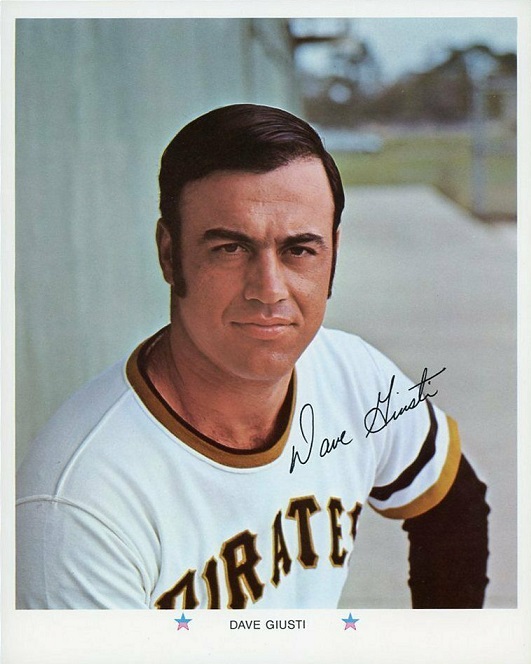 I mentioned up top that these “cards” are 8 x 10, and it’s basically just like an 8 x 10 photo with a white border. The only things that separate it from just being a normal photo on the front are the facsimile autograph and the name printed small at the bottom, along with two stars, which were the colors of Arco at the time. They didn’t go all out with the design idea, but it’s a nice large quality photo and the back is packed with information… 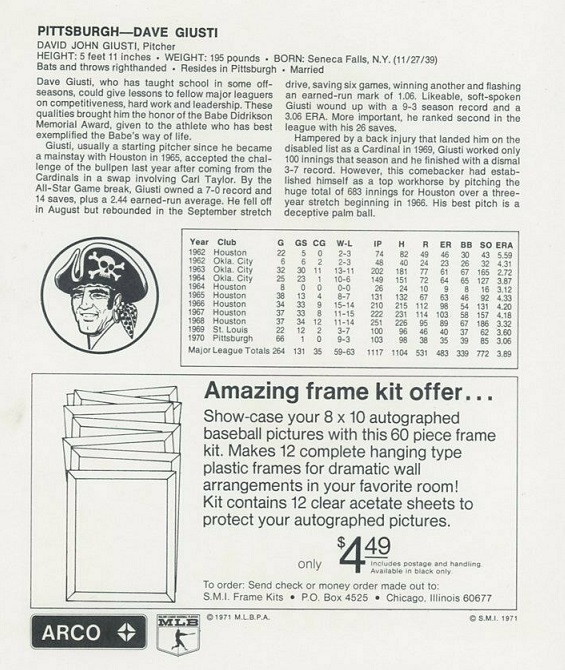 The back of this card is cropped down quite a bit, but the only thing I cut out was empty background. The print on this card could have been a lot bigger and taken up the entire back, but it only took up about 70% of the back, so I made it smaller on all four sides to give you an easier to read scan of the card. Despite the fact that they used up a lot of the back with the ad for frame kits, they also packed a ton of information on the back. I can’t forget to mention the big logo as well, one of my favorite Pirates logos ever…possibly my favorite overall.

What’s very interesting on this card, and I assume it wasn’t intentional, is that you can’t actually find the word “Pirates” anywhere. That happens on some cards now when they don’t have an MLB contract, but they have a deal with the MLB Players Association. However, that wasn’t the case here, as you can find the word Pirates written on the back of other Pirates players.

The stats here are only missing his first season of minor league stats, but they include minor league stats from the 1962-64 seasons when he played for Triple-A Oklahoma City, which switched from the American Association to the Pacific Coast League after the 1962 season. Giusti had a solid first season with the Pirates, but he posted a lower ERA in four of the next five seasons. The bio section gives a nice background of his career and the last line is probably the first thing that some people who saw him pitch think of when his name pops up. He threw a palm ball, and it was a very effective pitch. You don’t see that too often now. The Pirates had a minor league pitcher recently named Ryan Valdes, who threw a palm ball and he picked it up at an early age when his dad wouldn’t let him throw breaking balls. By the time he made it to the Pirates, it was his best pitch and he had different versions of the pitch.

The price on these cards isn’t bad. You can get one of these for as low as $6.49 on Ebay. Someone is selling one auction with five of them for $35.45, though it has a best offer option if you’re looking for stocking stuffers for all of the Dave Giusti fans in your life. There’s an autographed one as well for $35 (has a best offer option), but it’s personalized, so that one might be good for your friend Bill, if you like him enough to spend that much. The only sold one in the last three months went for $8.27.