This is the first time that we are featuring a 1938 card in this series. That’s not really an oversight on my part either. Simply put, 1938 was not a popular year for baseball cards, unless you stray from the traditional definition of a card and include pins, magazine premiums, cereal box backs and lids (literal lids from Dixie products). Just looking at card choices for the Pittsburgh Pirates from 1938, you have one option, and it’s this 1938 Exhibit card, which was part of a 16-card set conveniently numbered to 16 cards back when they had 16 teams. This card doesn’t say Pirates on it, but it’s the Pirates cards in the set, featuring four prominent members of the team on one card. It’s a rare card, as you will see in the price section, but it’s a card that I think a lot of you history buffs and vintage card collectors will like seeing. 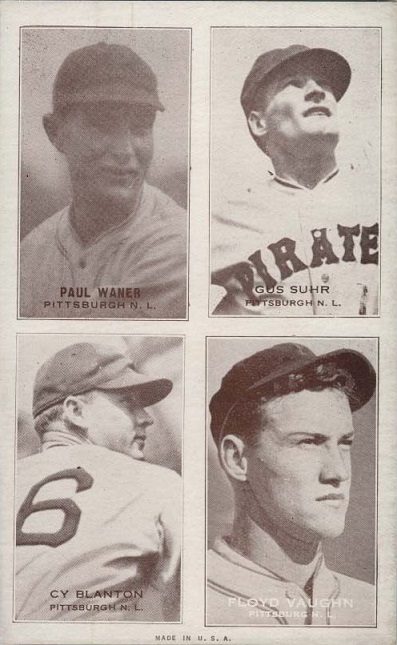 As you can see, four players each got their own panel on the card and all of them say “Pittsburgh NL” at the bottom under their name. Two of these players are all-time greats in baseball history, not just the Pirates. You can make a great case that Arky Vaughan was/is the second best shortstop ever behind Honus Wagner. He quit the game during the war years for three years when he could have put up big stats against watered down competition. If he played through that time, then maybe he would get the respect he deserves from baseball historians.

No one should argue about Paul Waner being on the Pirates Mount Rushmore, he’s an easy third choice behind Wagner and Roberto Clemente. Waner put up 70.1 WAR with the Pirates in 2,154 games. Vaughan put up 67.6 WAR in 1,411 games. Not impressed with that comparison? How about Willie Stargell, who I admittedly would put on the Pirates Mount Rushmore ahead of Vaughan despite what I’m about to say. Stargell had 57.5 WAR in 2,360 games. Yes, in an accumulating stat, Vaughan put up 10.1 more WAR in 949 fewer games than Stargell. Omar Moreno had 9.1 WAR in 944 games, so add Moreno’s time in Pittsburgh to Vaughan, but give his production to Stargell and Vaughan still edges him out. If you weren’t impressed by the Waner comp, then that one should work.

The WAR difference between Vaughan and Stargell for 4/5 on the Pirates list would have been even bigger if the Pirates didn’t decide to trade Vaughan after the 1941 season in an awful deal, that I only give a semi-pass to because the thought behind it was sound. Pirates were worried about losing players to the draft, so they got four mediocre players back who seemed safe from the draft. I’m guessing if the war didn’t just start up, that their asking price in a trade would have been different. At least I hope so, because on paper it was an awful trade to begin with, and it only turned out as being “just a bad trade” because Vaughan quit baseball for three years. It could have been much worse.

How about the other two players here? You can make a case for Gus Suhr being the best first baseman in team history, but that’s mainly due to the fact that there aren’t a lot of solid choices. Most people overlook Hall of Famer Jake Beckley because he played in the 19th century and Willie Stargell gets the spot, even though he played 450 more games in the outfield during his career. I’m fine with using Stargell on the all-time team at first base because I’m not going to leave him off, but if you give him an outfield spot with Clemente and Waner, then you’re making your team weaker. Max Carey in center field and Stargell at first base looks better than Stargell and Beckley, mostly because Beckley had a better career outside of Pittsburgh (26.9 WAR in Pittsburgh vs 34.6 elsewhere). The there’s Suhr, who played ten years at first base for the Pirates and accumulated 20.7 WAR. He was basically Kevin Young, except you got the 1997-99 version of Young the whole time in Pittsburgh, unlike Young, who had 9.8 WAR those years, and -4.0 WAR in his other eight full seasons in the majors.

Blanton had six solid seasons in Pittsburgh and gets a little lost because the Pirates weren’t winning any titles during his time in Pittsburgh and they were mostly known for their hitters. Blanton had a great season for the 1935 Pirates that never gets mentioned. He went 18-13, 2.58 in 254.1 innings during his rookie season. That ERA led the league, as did his four shutouts. He also led the league in stats that show up on Baseball-Reference now, but weren’t recognized back then, such as FIP, WHIP, ERA+, and fewest hits and homers per nine innings. There is a lot of bold ink in that 1935 stat line (for those who don’t get the reference, bold ink on BR indicates league leaders).

The price section here will be brief. PSA has graded 15 of these cards and their database has one sale from back in 2017. That card was graded 4.5 and it sold for $90 on Ebay. There is currently just one Ebay listing right now and no recent closed auctions for this card. I’ll note that prices of cards have gone up recently before saying that the current Ebay auction is also graded 4.5 and the price is $299. I don’t know if that’s a good price now, but it is the only option. For comparison, the only recent sale from this set on Ebay is the Washington Senators card. That sold for $179 and it was graded a PSA 2, plus it only has one Hall of Fame player (Rick Ferrell). In comparison to that card/price, the lone Ebay auction for the Pirates 4-on-1 card seems reasonable.