Today’s Card of the Day features Pittsburgh Pirates pitcher James McDonald, who played for the team during the 2010-13 seasons. This card came out in 2011 as parts of the Topps Heritage line, which uses old designs on new cards. That year they picked one of my all-time favorite designs to use for this particular set, the 1962 Topps set up. I bought the Pirates team set as soon as I found one on Ebay. Included in that set is card #252, featuring James McDonald. 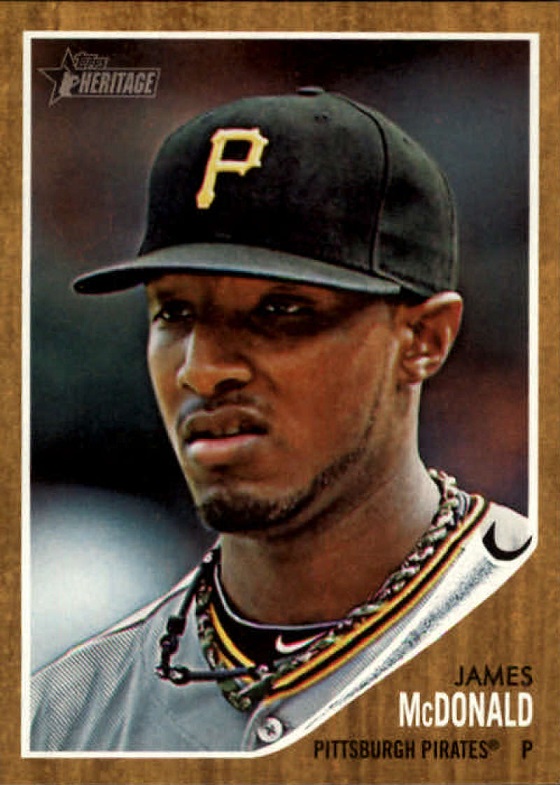 As much as I like this card design, McDonald doesn’t look too happy to be on the card. I think they could have picked a better picture for him, but maybe he’s showing disdain for his opponents. I’m a big fan of wood grain borders, and this is the best of that group, which includes the 1955 Bowman and 1987 Topps sets, two other favorites of mine. The Bowman one was mimicking a TV set, while the 1987 set was a 25th anniversary tribute to the 1962 design. They have similar looks, but I like this one better because of the darker border color and how those had the photo look like it was peeling off of a wooden display on the bottom right, rather than the fact that it was a border for the card.

That peeling paper actually fooled me for about 3-4 seconds here because I was looking at McDonald’s jersey to see if there was anything worth talking about, not even thinking about the front design. When I got to his left shoulder, I was trying to figure out what that black mark in the shape of a partial moon was..1…2…3…oh that’s the shadow from the paper. I actually said “duh” out loud to myself, not going to lie. 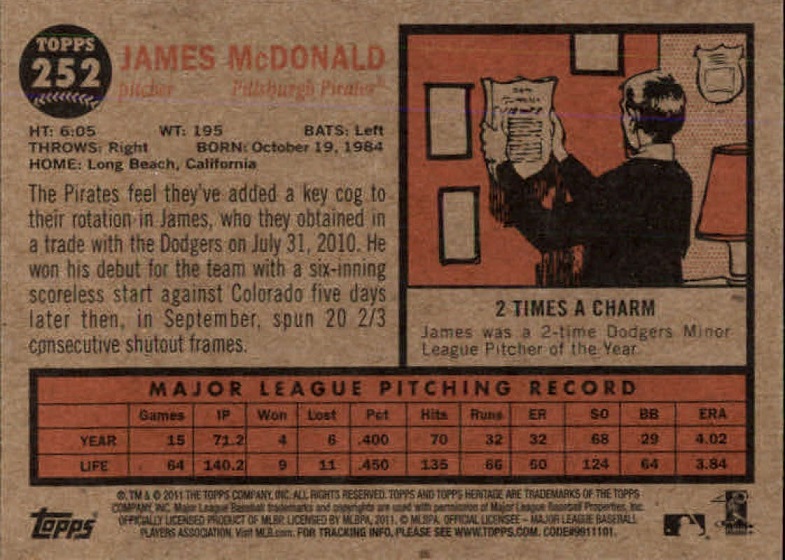 The back is also set up just like the 1962 Topps set. Topps included one year of stats and the career stats for the players, which left plenty of room for a cartoon drawing feature the popular generic gray Topps man, who made the back of the cards for every player in baseball. Not sure if that was smart using the same gray man for every player or lazy, but it made drawing the cartoons easier I guess. Whoever did the artwork didn’t even need to know what the players looked like in real life. I’m sure someone like Smoky Burgess appreciated looking exactly the same as Ted Kluszewski on the back of cards.

Anyway, generic gray Topps man here is proudly displaying his two Pitcher of the Year awards from the Los Angeles Dodgers. The Pirates appeared to get a steal when they acquired McDonald and Andrew Lambo for reliever Octavio Dotel, but both players suffered major injuries and then Lambo’s career really got sidetracked when he was diagnosed with cancer, so neither player came close to their peak potential. McDonald was out of baseball by 29 years old due to recurring shoulder issues, but unlike Lambo, he was fairly healthy before his major injury. Lambo missed good portions of three seasons with the Pirates with three different injuries. When this card came out, there were definitely high hopes for McDonald during the 2011 season.

This card is a common with typical common card tendencies on Ebay. There are currently 19 auctions up for this card and a few are in the $1-$2 range delivered. Only one auction stands out, and that’s the lone autographed copy, which has a $7.74 price tag delivered, though there’s a make an offer option. As nice as this card looks, there are no sold copies in the last three months on Ebay.